The NCAA men's basketball tournament, which concludes Monday night, is famous for its occasional upsets and the song, "One Shining Moment", which is played with a video montage at the conclusion of championship.

We saw it again this year. Loyola University put on a spirited run in the tournament up until about 7 minutes to go in the semi-final game. It was not to be. When it comes down to it, the big names with the bigger budgets and the biggest players always win.

It has become a similar refrain. We saw it with George Mason in 2006 (11th seed), Butler in 2010 (5th seed) and 2011(8th seed) and Wichita State in 2013 (9th seed). You might even add Gonzaga to the list from last year although they were a #1 seed. However, they could not defeat the basketball royalty that is North Carolina. We can definitely add Loyola to the list of those who had "One Shining Moment" but did not get all the way to the finish line.

Sister Jean, the 98-year old nun who serves as chaplain for the Loyola basketball team was the "feel good" story of the tournament this year. Who could not love her enthusiasm and energy?

Who could also argue with her signature phrase that became so famous during the tournament..."Worship, Work, Win". Great advice for anyone. 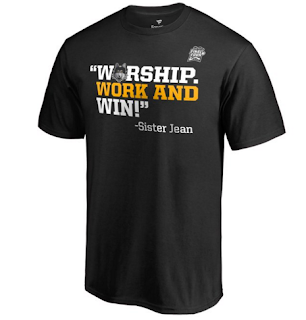 The only problem for Loyola was that it was missing one more word that started with another "W".

As in Moritz Wagner, the 6'11" star of Michigan who scored 25 points and grabbed 15 rebounds. Loyola simply did not have an answer for the junior who hails from Berlin, Germany.


As a result, Loyola had some shining moments but, once again, the shining moment at the end of this year's game will go to another school with a well-known basketball pedigree.

Six years ago, the last time that Michigan played in the NCAA Finals, I wrote about the history of the song, "One Shining Moment".

Interestingly, the song was first recorded at a studio in Ann Arbor, Michigan.

The song also was not even around when Villanova won its first National Championship in 1985 as an 8th seed and comes closest to being the team that could really lay claim to have achieved "the shining moment."

Enjoy the game and enjoy a little history about the song that helps make the NCAA Basketball Tournament so special.

Tonight is one of my favorite nights of the year.

I recently came across this video and the story of how this great tradition came about. It is probably not surprising that the inspiration had its roots with a pretty girl and the song came to national prominence due to an old friendship and a little bit of luck.

The song's composer is David Barrett who wrote it in 1986 and who also sang the original rendition of the song that was used on CBS from 1987 to 1993 and again from 2000 to 2002. Luther Vandross, Teddy Pendergast and Jennifer Hudson have also done vocals of the song for the finale of the Final Four weekend over the years. They still use the original sound tracks of the song that was recorded in a small studio in Ann Arbor, Michigan.

The song is great but it really is special due to the great editing done on the piece by the CBS Sports production staff.  It always concludes with images of that night's game. It must be a sight to see the staff put the finishing touches on the video in the minutes after the game.

Here are several YouTube videos that provide some of that wonderful history of a number of shining moments.


1999 sung by Teddy Pendergast.  My personal favorite because it was the year my beloved Miami RedHawks made it to the Sweet Sixteen. Miami and its star forward, Wally Szczerbiak, get a lot of coverage in that year's version of "One Shining Moment."  Look for Wally's big smile, Miami celebrating its big win against #6 ranked Utah to get to the Sweet Sixteen and Wally's dazzling spin move and dunk.


1987 sung by David Barrett.  The very first time the song aired and the start of a wonderful tradition. This was the year that Indiana won with the great shot by Keith Smart at the end. Watch closely and you can see Providence coach hugging his star player, Billy Donavan. Who knew that both of them would make so much Final Four history? Maybe even tonight, 27 years later.

I think Rick Pitino is a great coach but how can I not root for a coach named Beilein? (for those that don't follow basketball it is pronounced bee-line). BeeLine will be behind John Beilein's Michigan Wolverines tonight but I will really be waiting to see "One Shining Moment" once again.

Thank you, David Barrett, Armen Keteyian, Doug Towey and a pretty waitress in East Lansing, Michigan that inspired it all.

Here are the lyrics to the popular anthem:

The ball is tipped
and there you are
you're running for your life
you're a shooting star
And all the years
no one knows
just how hard you worked
but now it shows...
(in) ONE SHINING MOMENT, IT'S ALL ON THE LINE
ONE SHINING MOMENT, THERE FROZEN IN TIME