How many illegal immigrants are in the United States?

I am not sure anyone really knows.

It seems that for years and years I keep hearing the same number...11 million.

I checked to see what I could find in the way of official estimates.

Here is what the U.S. Census Bureau says about it on their website.

Do the data on the foreign born collected by the Census Bureau include unauthorized immigrants?

In other words, our federal government has no idea of how many illegal immigrants are in the country.

Where does the 11 million number come from?

I found this report from USA Today from last year that cites data from the Pew Research Center that the population of illegal immigrants in the United States has been steady for the last eight years---at 11 million. 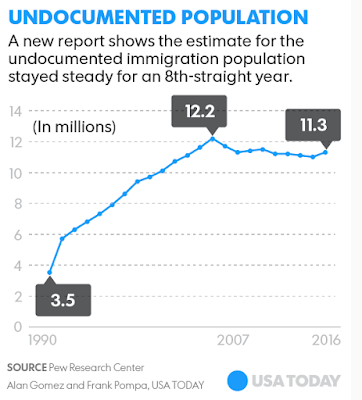 These numbers suggest that the number of illegal immigrants today in the United States is lower than it was in 2008 before Barack Obama became President.

Does anyone believe those numbers are correct?

It seems like I am not the only one that is a little skeptical.

This CNN poll from 2015 asked voters whether they thought illegal immigration to the United States had increased or decreased in the last few years. By a 69%-25% margin the respondents believed it had increased. By the way, 61% of Democrats believed that as well.

This Mother Jones article that cites this poll tries to make the case that this is a perfect example of how woefully misinformed the voters (particularly Republicans) are about the issue of illegal immigration.

That article went on to suggest that immigration would not be a big issue in the 2016 primaries or the general election.

I guess that just shows what Mother Jones knows. Does anyone think that Donald Trump would have been elected President but for his position on illegal immigration?

Could it be that the American people have a better understanding about the numbers of illegal immigrants in the country from their everyday experiences at the grocery store, at the mall, at the their children's school and at work than the Pew Research Center or anyone else does?

As I stated above, I don't believe that anyone has a good estimate on the number of illegal immigrants in the United States.

For example, the Migration Institute estimates that there are 3.6 million illegal immigrants alone that came into the United States before their 18th birthday. Compare that to the 800,000 illegals who were granted protection from deportation by President Obama via an executive order through the DACA (Deferred Action for Childhood Arrivals ) program in 2012 and which President Trump has offered to expand to twice that number in a legislative fix.

Doesn't common sense suggest that if you have nearly 4 million illegals alone who came before their 18th birthday the total number of illegal immigrants must be larger than 11 million?

Considering all of the estimates and uncertainty it seems that we need a number we can trust on the numbers of illegal immigrants who are in the country. How can we establish policy and seek a solution to the immigration issue until we have numbers we can rely one?

That is why I was pleased to see that the Commerce Department announced this week that it will reinstate a question about immigration status to the next census. That question was last a part of the census in 1950 and is still asked as part of the annual Census Bureau's American Community Survey.

Predictably, California has already sued the federal government stating that the question is illegal.

Why was it not illegal in 1950 and before and why is it being used on the American Community Survey without being illegal?

California is clearly concerned that asking such this question might cause some illegal immigrants to not respond to the census. As a result, California's population might be understated thereby reducing its representation in Congress and the federal money coming to the state that is allocated based on population.

I understand the concern of California but how else is it proposed that we get the best possible information on the numbers in question? California and all other states have a right to see that every resident is counted in the census. However, the United States of America also has a right to know how many people are within its borders as citizens, legal residents or illegal immigrants. That is especially true at a time when the question of immigration in all its forms is being so hotly debated.

In addition, every illegal immigrant who should not be here and is counted in the census effectively dilutes the power of those who are lawful citizens in other states and congressional districts.

I have no doubt that California will find some left-wing judges to somehow find that a citizenship question on the census form is infringing on someone's rights. However, I cannot see the Trump administration not fighting the issue in the courts. We can expect to see this issue eventually move up through the court system.

We can only hope that the Supreme Court will ultimately conclude that it is reasonable to have the census tell us how many citizens and non-citizens (legal and illegal) make up our population.

It seems sensible that the Census is the right vehicle to do this. Is there a better way I am not aware of? Or are we to keep relying on estimates of the Pew Research Center or the Migration Institute for the next ten years?
Posted by BeeLine at 5:03 PM