Something Has To Give With Student Loans

Student loan debt promises to be one of the major issues in our economy over the next decade.

Let's put that in context. Credit card debt reached its highest level in history at the end of 2017 and it is only $1 trillion. Auto loans are also at record levels but there is more owed on student debt than on autos ($1.2 trillion).

$1 trillion in additional student loan debt has added since 2006!

A larger question is how will these borrowers meet their student loan obligations while also borrowing to buy a house, a car and also fund (through taxes) the mounting debt of the federal government and the coming tidal wave of unfunded Social Security and Medicare costs from the baby boomer generation?

Something surely has to give somewhere.

I recently came across an interesting article on the subject that was appropriately titled, "Student Loans--A Generational Disaster".

The article makes the point that I have made before in BeeLine.

Compound interest can be your best friend or your worst enemy. That statement is even truer if you are young. Savings put away when you are young can easily make you wealthy if you have the good sense to let the money compound over the years. However, debt taken on while you are young, that is not paid off quickly, is a sure way to put yourself in a financial hole that you will never dig your way out of.

It has always been difficult to get young people to save what they should for the future. Most want to live for today. They think tomorrow will never come. However, in today's world many can't save even if they want to. 75% of college graduates owe on some form of student debt.

It is vastly different today than when most baby boomers graduated. Few boomers had student debt when they got their undergraduate degree. Student debt was more likely to be taken out for a graduate degree if it was at all.

One of the biggest generational differences which causes a disconnect between baby boomers and millennials is student debt. Many baby boomers are confused why college graduates don’t immediately move out of their parents’ house like baby boomers did. The issue is that once a student graduates, they become debtors. It’s a vicious cycle which turns compound returns against borrowers.

For example, say you graduate with $40,000 in debt and you owe a 4% interest rate for 15 years. While the federal government expects the loans to be paid back in 10 years, it takes the average Wisconsin graduate 19.7 years to pay off a loan for a bachelor’s degree. Therefore, it’s a reasonable example. In this mock example, monthly payments would be $295.88 and $53,257.53 in total. If you don’t have student loans at graduation like many baby boomers and you put $295.88 in a diversified portfolio which returns 6% per year, you will have $86,477.68 after 15 years. Therefore, the difference between someone with student loans and without them ends up being $139,735.21. The difference grows exponentially as the student loans grow because the interest paid and the returns on the potential savings increase.


The article calculates that by age 37 there is a $140,000 difference in net worth between someone with $40,000 of debt when they graduate and someone that does not have any debt and is able to save and invest what they would have paid on the debt.

Even if there is no difference in savings patterns between the saver and the borrower over the next 30 years, the person without the student loan debt will have in the range of half a million more at age 67 than the person who had the student debt! That $140,000 difference just keeps growing.

The other interesting factoid in the article was this chart that compared the net worth of various individuals under the age of 40 who had taken out student loans. This chart had come from a data source involving loan applicants from tens of thousands of individuals who were seeking to refinance their student loans. That data was then sliced and diced in various ways and the results were written about in an additional article titled "How Much Money Do People Have?"

This chart shows net worth by degree. 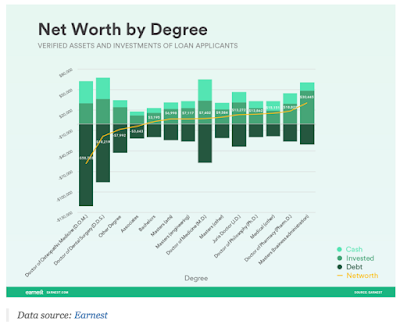 This chart indicates that MBA graduates have the highest net worth with pharmacists in the next best position. Interestingly, young MBA's had over 4 times the net worth as young M.D.'s. That might change over the course of time as the docs get beyond their 30's and pay off their student debt more aggressively.

However, refer to the example above once again.  It is hard to catch up when you start out behind.

Young osteopaths and dentists fare the worst with negative net worths from student debt. They clearly are carrying a lot of debt but apparently are not generating the income to climb out of the hole as fast as others.

The good news is that the average person student with loan debt does slowly build net worth between age 25 and 38 but it falls far short of what is necessary to put that individual on track for a successful retirement.

The average net worth for those with a median age of 38 is only $38,072. I believe that to be on track at that age for a successful retirement that you should generally have an amount equal to 1.5-2.0 times your annual income saved in investable assets.

In other words if you are earning $100,000, you should have $150,000-$200,000 in investable assets set aside for retirement by your late 30's.. On this measure I would have to believe that most of these individuals are well short of that number. 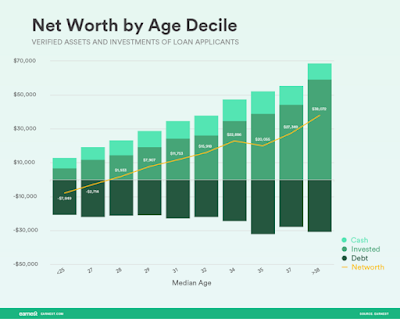 I noticed one more thing in the chart data.

Notice how debt is holding fairly steady until the individuals are in their mid-30's but it takes an upward turn at about age 35? First, you would think that debt would show a more noticeable downward slope in the 10 years after college. This tells me that that any student debt being paid down is being replaced with other debt (car, credit card, etc). It also suggests that age 35 might be the magic time when a lot of these Millennials are buying a house. 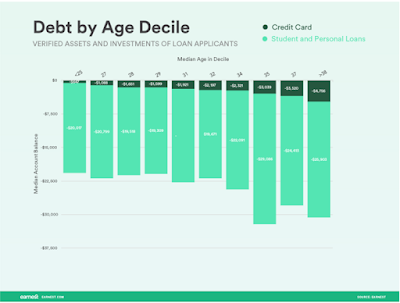 Housing assets and mortgage debt were not considered in this data but this might suggest that buying a house triggers more debt (borrowing for furniture, appliances, home improvements) beyond the mortgage. A perfect example of what I call the "spending multiplier effect" when I teach my course on financial planning for college students.

Where does all of this student debt lead us?

Is it a generational disaster?

Will the next generation begin to look more critically at the return on investment on undergraduate or graduate degrees?

How will the Millennial generation pay off this student debt while also becoming increasingly responsible for the federal debt and the Social Security and Medicare benefits for their parents and grandparents?

Will retirement even be something this generation can consider?

Will this generation increasingly demand that this debt be forgiven? If so, who will pay? Does the cost then get spread to all taxpayers?

I don't know the answers.

I do know that something has to give with all of this student debt.