We have reached a point that I don't think has ever been experienced in this country.

There are almost as many adults in the U.S. population who are single as there are married.

Just slightly more than 50% of U.S. women are married.

Of the remainder, almost 30% have never been married, 10% are divorced and 10% widowed. 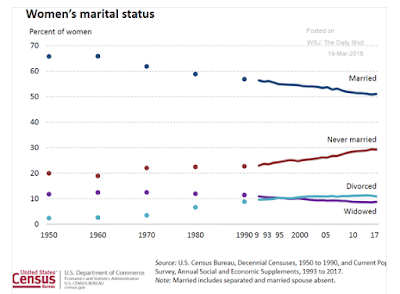 A slightly higher number of men are married. However, 35% of men have never been married, 10% divorced and a small percentage are widowed. 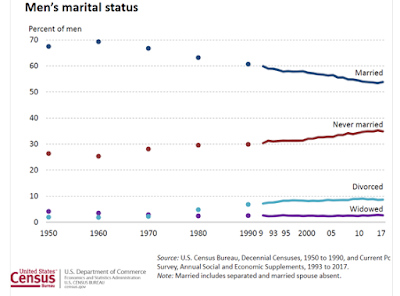 A big reason for the drop in the marriage rate is the fact that recent generations have been waiting longer to marry.

For example, 57% of Millennials have never married. At a similar age, 43% of Gen X'ers and 33% of Baby Boomers had not married. 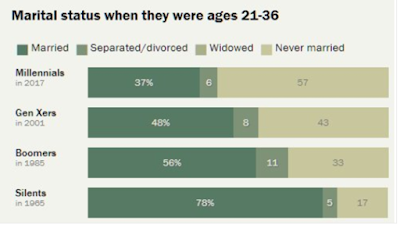 Another reason is that many more couples are living together before they marry. In one survey, 75% of women age 30 and younger stated that they had lived with someone outside of marriage at some point in their lives. More couples living together also means fewer marriages.


The trend "reflects the fact that marriage is increasingly becoming optional in adult life now," said Susan Brown, a professor of sociology at Bowling Green State University in Ohio, who was not involved in the new report.

Nowadays, people expect to be financially secure and to have finished education before they enter marriage, Brown said. "For many people, this is a very high hurdle," Brown said. The average age for marriage is 26.5 for women and 28.5 for men — an all time high.

This is just not the case in the United States either. In Australia, 79.5% of couples report that they lived together before they got married. The similar number in 1975---16%.

At one time the conventional wisdom was that these cohabitation arrangements were a good idea. It was smart to do a "test run" and see how the arrangement worked. Some argued that it would result in fewer divorces later on. However, all it seems to have done is delayed more marriages and resulted in more divorces in the long run.

I wrote about how the conventional wisdom had been proven wrong six years ago. Seeing this new data suggested to me that it might be a good time to take another look at that post.

It might be worth sharing with anyone that thinks that "shacking up" is the right way to go.

I am always interested in stories that cut against the grain of conventional wisdom.

Take the question of cohabitation before marriage.  You might call it living together.  Or shacking up.

The argument for it seems to be that it is a good test run for marriage.  In a nationwide survey conducted in 2001 by the National Marriage Project, 62% of men and women in their 20's believed that living together with someone before marriage is a good way to avoid an eventual divorce.  However, that same report stated that there is no evidence to support the view that living together before marriage reduces the odds of divorce.  In fact, there is research to suggest that cohabitation before marriage (particularly before the couples are engaged) results in less fulfilling marriages and more divorces.

Meg Jay, a clinical psychologist, has an opinion piece in yesterday's New York Times.  And the answer again seems to revolve around one of my favorite topics-behavioral economics.


Sliding into cohabitation wouldn’t be a problem if sliding out were as easy. But it isn’t. Too often, young adults enter into what they imagine will be low-cost, low-risk living situations only to find themselves unable to get out months, even years, later. It’s like signing up for a credit card with 0 percent interest. At the end of 12 months when the interest goes up to 23 percent you feel stuck because your balance is too high to pay off. In fact, cohabitation can be exactly like that. In behavioral economics, it’s called consumer lock-in.

In effect, each step forward in living together is often incremental and evolutionary.  The decisions leading to marriage are not weighed in the larger context of the real commitment necessary for a successful union.  It becomes more the case of gradually sliding into it rather than really understanding that it is a giant leap.


Lock-in is the decreased likelihood to search for, or change to, another option once an investment in something has been made. The greater the setup costs, the less likely we are to move to another, even better, situation, especially when faced with switching costs, or the time, money and effort it requires to make a change.

Cohabitation is loaded with setup and switching costs.  Living together can be fun and economical, and the setup costs are subtly woven in. After years of living among roommates’ junky old stuff, couples happily split the rent on a nice one-bedroom apartment. They share wireless and pets and enjoy shopping for new furniture together. Later, these setup and switching costs have an impact on how likely they are to leave.


Jay speaks of a recent client, Jennifer, who came to her after having lived with her boyfriend (and eventual husband) for four years.  She was in the process of looking for a divorce lawyer having spent more time planning her wedding than she spent happily married.

As Jennifer and I worked to answer her question, “How did this happen?” we talked about how she and her boyfriend went from dating to cohabiting. Her response was consistent with studies reporting that most couples say it “just happened.”

“We were sleeping over at each other’s places all the time,” she said. “We liked to be together, so it was cheaper and more convenient. It was a quick decision but if it didn’t work out there was a quick exit.”

Jennifer said she never really felt that her boyfriend was committed to her.  “I felt like I was on this multiyear, never-ending audition to be his wife,” she said. “We had all this furniture. We had our dogs and all the same friends. It just made it really, really difficult to break up. Then it was like we got married because we were living together once we got into our 30s.”


I guess Simon and Garfunkel had it about right.

You know the nearer the destination, the more you slip sliding away