Blue Wave On The Way?

There is a lot of talk this week on what the victory of Democrat Conor Lamb over Republican Rick Saccone means looking to the mid-term elections.


Many are seeing it as a harbinger of a massive blue wave that will sweep Republicans out of office in November's mid-term election.

Others argue that it means little as it was a special election for a district that will be broken up anyway under a court-ordered congressional redistricting plan by November.

As in most things like this, the truth lies somewhere in-between.

Republicans should be concerned that in a district that Trump carried by 19 points the Democrat was able to win even though it was a margin of only 600 votes out of 227,000 votes cast.

How did that happen?

It is the same story as in the Alabama senate race involving Roy Moore.

Democrats were energized and were motivated to go the polls. There is little doubt that a lot of that energy is directed at sending a message to Donald Trump.

When people are on the outside looking in there is a lot more energy expended.

There is little question that Democrats are highly motivated right now. The same could be said about Republicans when Obama was in power. It seems that those at the bottom of any hill tend to be more motivated to fight towards the top than those at the top of the hill are motivated to retain their position.

Look at the numbers.

Conor Lamb got 113,800 votes in the special election. That means he effectively got 80% of all Hillary voters.

The math is pretty simple. Lamb won because a lot of Hillary voters showed up and voted. Saccone lost because an even greater number of Trump voters didn't bother to vote.

It is exactly the same thing that happened in Alabama in the U.S. Senate race involving Roy Moore that I wrote about previously.

A big part has to do with the individual candidates. After all, in the end people are voting for a person, not a party.

Roy Moore was not a great candidate. A lot of voters did not like him for a variety of reasons. It is not enough just to have an -R- after your name, even in Alabama. Hillary Clinton found out the same thing. She had the same -D- after her name that Obama did with quite different results.

Rick Saccone was also a sub-par candidate. He raised little money on his own and he did not excite voters in any way.

On the other hand, Conor Lamb was a young clean cut veteran, who showed a lot of energy and worked hard to separate himself from the typical liberal Democrat. He said he personally opposed abortion, he was for gun rights, he supported the Trump tariffs and he stated he would not vote for Nancy Pelosi to lead the Democrats in the House.

You put it altogether and the Democrat squeaked by.

However, does this tell us anything about the mid-terms in November?

It should tell the GOP that the Democrats can be expected to turn out voters in November in greater numbers than they have historically.

Democrats have traditionally had more difficulty in turning out voters in mid-term elections than Republicans over the last couple of decades.

One reason for this is that Democrats rely more on younger and minority voters who have generally not shown as much interest in voting in mid-term elections compared to Presidential years.

On the other hand, Republican voters, who tend to be composed of more voters who are white and older, are more apt to vote in the mid-terms.

This chart shows the rather significant drop-off in total votes cast in House of Representative races since 2000 between Presidential election years and mid-term election years.

On average, vote totals have dropped by an average of 29% from each Presidential election year compared to the next mid-term election. 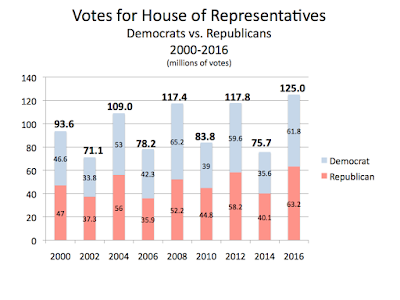 This effect was even more pronounced in the Obama years. Republicans were very motivated to get to the polls to stop the Obama agenda. That energy was rewarded as the GOP took back majority control of the House that it retains today.

In 2010 (compared to 2008), overall votes for House candidates dropped 29%. However, Democrat votes dropped 40% and GOP votes only fell by 14% compared to two years earlier.

Those numbers translated into a rising red tide during the Obama years,

It is going to depend on whether the Democrats can reverse the historical voter attrition they have had in the mid-terms.

It is also going to depend on whether GOP voters turn out to defend Donald Trump.

The best hope for the Democrats is to look at what happened in the 2006 mid-terms. Democrats were not happy with George W. Bush and they held their vote losses to only 20% between 2004 and 2006. That is 12 points better than their average.

At the same time, GOP voters had become weary of Bush and not many showed up to defend him in their Congressional votes. Republican votes slid 36% between 2004 and 2006.

That is the formula for a blue wave.

An energized Democrat base who has an "enemy" target.

A lackadaisical GOP who is not eager to defend their candidate.

These elements were in place in Alabama and Pennsylvania.

Will the same be true in November?

I have no doubt that the first part of the formula will be in place. Democrat turnout will be higher in the mid-term election than it was in the Obama years. Having a President Trump is plenty of motivation for Democrats to want to vote.

If the voters who voted for Trump turn out to defend him in the mid-terms there will be no blue wave.

Trump ran on the "Make America Great Again" theme in 2016.

He has already announced he is running in 2020 on the theme "Keep America Great".

It seems to me that he is getting a little ahead of himself.

My advice is that he should start talking about a theme of "Defend America" in 2018. He needs his voters to come out and defend his agenda.