Not Afraid To Be Great

I don't know if Donald Trump will be a great President, average, or terrible when history is written.

How can anyone make such a judgment just over a year into his Presidency?

However, 170 members so-called "experts" from the American Political Science Association’s Presidents and Executive Politics section recently judged Trump to be the worst President of all time.

Here are the complete rankings including the change in the rankings since the last survey was done in 2014.

If you want to assess the credibility of the survey consider that the experts increased Obama's ranking by 10 places since the last survey.  Now consider what was it that contributed to that increase in greatness over his second term. The success of Obamacare? The rise of ISIS? The economy? Standing up to Vladimir Putin? 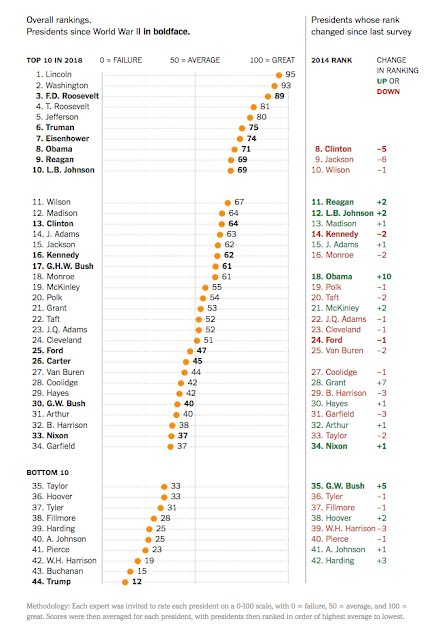 What I do know is that you cannot be great unless you are not afraid to be great.

I also know that Donald Trump is not afraid to be great.

Look at the first three names on this list of the greatest Presidents. One thing they share is that they were not afraid to be great.

When Washington led his troops to victory over the British he could have also become an American monarch. At a minimum, he could have been President for rest of his life is Xi Jinping as attempting to do in China. He walked away after two terms.

George Washington was not afraid to be great. He put it all on the line and he expected little in return.

You can say the same thing about Abraham Lincoln. He could have negotiated with the Confederacy after the southern states seceded from the union. He could have decided that it was too controversial to push for the 13th and 14th amendments. He was not afraid to take a stand. Many criticized his actions.

Abraham Lincoln was not afraid to be great. We now appreciate that courage and greatness.

Franklin Roosevelt took office as the U.S. economy was in ruins and as Nazi Germany and the Japanese Empire sought to expand their borders and enslave millions of people. Roosevelt responded aggressively to the needs of the American people with his New Deal. At times he went too far as with his attempt to stack the Supreme Court. However, he was not afraid to take action. He also did not hesitate to act when the war was brought to him. He also ignored the Washington precedent on serving two terms when he thought that the country needed continuity in those turbulent times.

FDR is also best remembered for his famous line on not being afraid in his first inaugural address.

"The only thing we have to fear is fear itself."


Franklin Roosevelt was not afraid to be great.

If you know what Winston Churchill did for Great Britain in World War II you also know he was not afraid to be great despite enormous odds and criticism. All of this was recently portrayed in the movie, "The Darkest Hour". 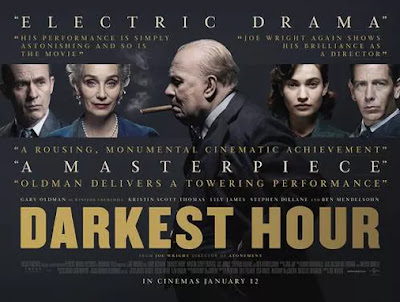 People can say a lot of things about Donald Trump. However, they cannot say that he is afraid to be great.

Why do most political observers, pundits and the press say it is a bad idea to meet with Kim?

Tom Fernholz in Quartz explains why every other President considered it to risky to meet the North Koreans.

In international diplomacy, the leader-to-leader meeting is the highest level of commitment available. No prior White House would send the president into a summit that has not been pre-scripted with guaranteed results. Should there be no agreement, there is no face-saving blame to be put on negotiators, and little room left for diplomacy. And while the White House says this meeting is not a negotiation, that only raises the question of what the president is even doing there.


In effect, it is like a high wire artist performing without a net. Very few aerial performers are willing to do it anymore. Even fewer politicians are these days. They are so afraid to take a risk because they might be criticized they never give themselves a chance to succeed.

This caused CNN host Erin Burnett (certainly no Trump fan) to say this on her show the night of the announcement that Trump was willing to meet Kim.

“Just an extraordinarily evening and of course opening the door to the big question, if President Trump can truly solve this problem, that would be going down as a great president. And there’s no way around that. That is the reality here,"


Of course, great Presidents usually come about by facing great challenges. In many respects, the times make the man. It was certainly true with Washington, Lincoln and Roosevelt.

Greatness does not follow when taking the easy road. It only graces those who are not afraid of the challenge on the hard road.

Success is never assured. Trump may fail bigly. However, he is not afraid to be great. That in itself is a rare commodity. Keep that in mind as you listen to those who criticize Trump.

You cannot be great unless you are not afraid to be great.
Posted by BeeLine at 10:01 PM