Leverage and the Long Game

Another week and the mainstream media and the political pundits are expressing shock at something else that President Trump is doing.

Last week it was Trump's announcement that he was introducing tariffs of 25% on imports of steel and 10% on aluminum.

It is totally predictable that the Trump bashers are arguing that such a move will create chaos and set off a trade war that will badly damage the U.S. economy.

Never mind that Trump was pretty clear about where he stood on this issue during the campaign. This should be no surprise to anyone

You also have to consider that if Hillary Clinton or Bernie Sanders had done the same thing that they would now be hailed as saviors of the American worker.

It also seems to be lost on these people that Trump is always playing a long game rather than the short game that most politicians are concerned with.

Trump always has longer-term objectives in mind. In this case I am sure that he is looking at the broader overall trade implications for the United States in the global marketplace. This tariff announcement might just be a part of longer-term negotiating strategy on broader trade agreements.

Trump is also keenly aware that if the United States does not have a healthy domestic metals capability there will be serious national security implications in the future. In fact, the law that allows him to impose tariffs gives the President that discretion due to national security concerns. It goes without saying that it is difficult to build personnel carriers, tanks and airplanes without steel and aluminum.

The United States already cannot produce the steel that it currently consumes. In 2016, domestic steel production amounted to 78 million tons. However, it had to import 21.7 million net tons to meet domestic consumption needs. The entire European Union had net imports of less than half of that amount.

Let's just say that Trump understands better than most that you are not in a strong position as a country if you are dependent on your biggest geopolitical foes for one of the key commodities needed to sustain your economy or to protect yourself in the event of war.

U.S aluminum production has also been dropping steadily. Only two smelters remain fully operational in the United States today. Eight smelting operations have either gone out of business or have seriously curtailed operations in the last three years alone.

Production of aluminum has dropped so much that Iceland now produces more primary aluminum than the United States does! 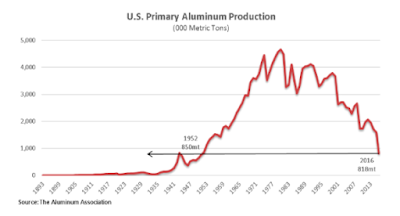 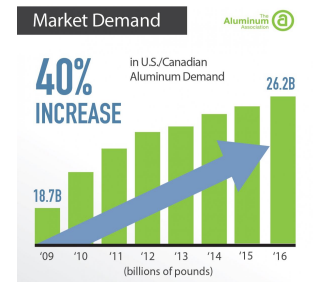 This means that the United States is increasingly dependent on aluminum from foreign sources. And the largest global source is China.

In 2000, China produced only slightly more than 10% of the world’s primary aluminum. It now produces more than half of the aluminum in the world. As a result, the United States is steadily being squeezed out as a producer of aluminum. 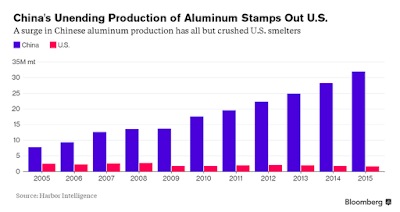 There is nothing like a little context to better understand that Trump may not be as "crazy" as he is made out to be. Is it possible that national security might be more important than the cost of your beer can going up a penny?

Trump was also derided for taking to Twitter and stating that "trade wars are good, and easy to win."

I don't know that is always true but it is a lot easier to win a trade war when your country is importing a lot more than it is exporting. And that is the case with the United States today---by a wide margin.

In 2017, the United States imported $2.343 trillion and only exported $1.547 trillion---that is a trade deficit of almost $800 billion. I dare say that other countries would feel much more pain from a trade war than the United States.

Which countries has Trump talked the most about regarding trade?

Trump also has a few other topics of interest beyond trade with these countries like a border wall (Mexico) and assistance in dealing with North Korea (China).

Do you think that might also be part of his long game?

The United States does have some trade surpluses with a few countries but they are far less significant than the amounts in which there are trade deficits. You might notice as well that these are not generally countries producing large amounts of steel and aluminum.


Beyond thinking about the long term, rather than the short term, Trump also understands that in order to do deals and reach agreements you need to understand your strengths and weaknesses, as well as those of your adversaries. You also have to be able to apply leverage when you have it. Most everyone on the planet is driven by enlightened self-interest. There are not many who have something that they are going to give up willingly.

More power to these countries for taking advantage of our foolishness. Our elected representatives literally gave away substantial portions of our domestic economy by thinking short-term rather than long-term. They had the leverage of having the most attractive market in the world and yet they gave it away to China, Mexico and other countries for nothing. I have written about this previously.

The foolishness is over.

And he understands the use of leverage.

And despite what the media wants you to think...Donald Trump is no fool.