The Higher Cost of Education

We spend over $500 billion per year on higher education in the United States.

44 million Americans now owe $1.5 trillion in student loan debt that was borrowed to pay for their college and other post-secondary school education expenses.

As I have written before, Americans owe more in student loan debt that the entire GDP of Russia.

The financial costs of education in the United States are mind-numbing but I am just as concerned about the costs that society must bear for what is being taught in our colleges and universities today.

We used to think of universities as a place where open and free debate, discussion and discourse took place. You respected divergent views and you respectfully dissented where necessary. College was where you went to find out that perhaps you did not know everything about the world that you thought you did when you were 18 years old.

What we see today is far different. It is not uncommon that conservatives and those who do not espouse liberal thought are condemned and shouted down. Instead of protecting free speech, college administrators cop-out and disinvite the speakers because they can't provide the necessary security.

What have our colleges and universities become?

I highlighted some of the insanity that reigns on college campuses during the GOP primaries in 2016 about the students at Emory University (I am an alum of its law school) who complained to the college administration about messages in chalk written on campus sidewalks.

Students at Emory University protested on Monday after finding support messages for Donald Trump written around the Atlanta campus in chalk, according to The Washington Post.

Charging that the drawings, which said things like “Trump for Pres” and “Vote For Trump,” left them feeling attacked, students demanded the university’s administration take action, reported the student newspaper, The Emory Wheel.

The Wheel says that 40 students gathered in an outdoor space on campus holding signs that included messages like “Stop Trump,” and chanted to the administration, “You are not listening! Come speak to us, we are in pain!” 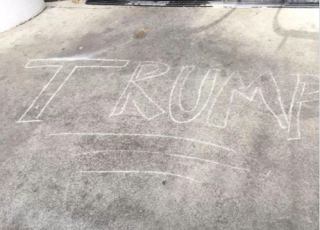 “This wasn’t ordinary campaigning,” Jonathan Peraza, a freshman student and a member of student minority group LatinAction told The Daily Beast of the drawings. “It was deliberate intimidation. Some of us were expecting shootings. We feared walking alone.”


The administration allowed the chalk messages to continue in specified areas. However, when you consider the response given to the aggrieved students you begin to understand why we see these kinds of actions by students.

This is what President James W. Wagner said in response to the protestors' concerns.

He suggested the university would make “immediate refinements to certain policies and procedural deficiencies; regular and structured opportunities for difficult dialogues; a formal process to institutionalize identification, review and addressing of social justice opportunities and issues; and commitment to an annual retreat to renew [their] efforts.”

Leave it to an academician to use so many words and still say nothing about the issue at hand.

I would have thought it would be sufficient to laugh, tell the students to grow up and suggest they get back to class. I might have even given them some chalk to draw a picture of Bernie or Hillary if they so desired.

This week I was dismayed to find my undergraduate alma mater, Miami University, involved in similar craziness. To make matters worse, the university's women's center is funding the foolishness.

CampusReform.org reports that ""The Women’s Center at Miami University is paying students to organize events that promote “social justice and radical feminism” on campus.

The university is paying students to promote radical feminism?

Can you imagine what would happen if a university was paying students to promote "radical conservatism" or the "right to life" movement?

Seven lucky students get a paid internship to organize events for students such as World Hijab Day and Male Ally Day. By the way, doesn't it seem a little contradictory that radical feminists are promoting National Hijab Day?

One of the current interns in the program, Elisabeth Dodd, a social justice major, had this to say about her university.

The school is “physically very heteronormative, white, sexist, and very problematic in general and exclusionary. Very hierarchical. Student workers aren't valued as much, and there's not a lot of visibility,” Dodd commented, labeling the architecture of the school’s student center one of the main social justice issues on campus, saying it creates a false perception of diversity.

The architecture of Miami's student center is one of the main social justice issues on campus?

How is that possible? The radical feminist intern explains.

"In our student center, everything is glass. And it kind of felt like students are on display,” she explained. “The actual set-up of the student center...Miami definitely advertises its students, in a way that isn't comfortable for everybody.”

Miami advertises its students and that is a social justice issue?

What do you then call a student who walks across campus? Are they not displaying themselves? Or what about all of the students who are posting (and advertising) everything about their lives on social media everyday? I was not aware that these were social justice issues.


Here is an exterior image of Miami's Armstrong Center.

Here are a few images of the interiors of Miami's student center. 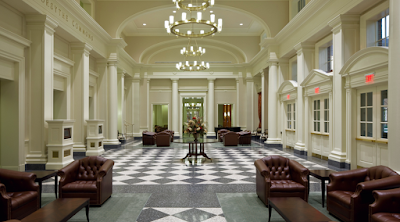 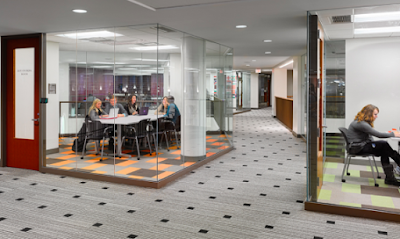 I dare say that if this student believes that the student center architecture is a big social justice issue I hate to think what she will think when she is working in some cube farm after graduation. I guess that assumes that a social justice major would even be interested in working for someone who had a big, bad and evil profit motive.

All of this makes you wonder where all of these students are getting these incredibly inane ideas.

I can't imagine that there are that many parents, who produce students with enough intelligence to attend schools like Emory and Miami, who are filling their children's heads with these ideas.

That means that our educational system, beginning in kindergarten, is largely responsible.

The cost of education is high.

The resulting costs to society of students who graduate with ideas in their heads like those at Emory and Miami is much higher.