Joe Biden and a lot of other politicians like to tell us that if we just follow the science and the experts we will win the war with Covid-19.

It all sounds wonderful until you actually assess how that advice has matched up to reality. Reality keeps revising the "science".

We have seen that again this week.

Dr. Tony Fauci was all over the media the last couple of days telling us that it is safe for children to be in schools.

“The default position should be to try as best as possible, within reason, to keep the children in school, to get them back to school,” Fauci told ABC on Sunday, as reported by The Hill. “If you look at the data, the spread among children and from children is not very big at all, not like one would have suspected. So let’s try to get the kids back".

Of course, this is the same Dr. Fauci who has been telling us for months that it was not safe for children to be in school.

In fact, Senator Rand Paul (R-KY) got into several exchanges with Fauci over the summer questioning why he was was not supporting a broad reopening of schools. At that time, Fauci said it was too risky.

Fauci said that despite overwhelming evidence that I have shared in BeeLine since as far back as May that schools have not been shown to be significant vectors of Covid transmission and that children are at lower risk from Covid than the seasonal flu.

Fauci seems to have never gotten that memo the last six months until this week.

Senator Paul has not forgotten and neither has BeeLine.

Let it not be forgotten that Fauci was also the expert that told us that wearing a face mask was of no value until he later decided it was.

He was also the expert who argued against the Chinese travel ban with President Trump until he advised him that the entire country needed to be locked down.

Dr. Fauci was also the one who was all over media this summer telling us that New York did it right despite having the 2nd highest per capita death numbers in the country behind New Jersey.

How has that worked out in the new reality? 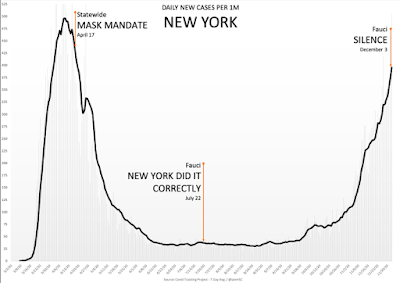 I could go on but this blog post would then be entirely about Fauci and some other experts deserve equal time.

The CDC came out yesterday and changed their recommendations on quarantine periods.

We have been told by the CDC since March that if you have or have been exposed to Covid with a close contact that you need to quarantine for 14 days.

The new guidelines are 10 days if no symptoms ever develop. The quarantine period is only seven days after a negative test.

I wonder what the economic and opportunity costs that those extra days of quarantine have had on the U.S. economy since those CDC recommendation were first made?

Of course, when a quarantine is recommended due to a close contact, it usually means that person has had a positive result from an RT- PCR Covid test.

However, PCR test results are highly dependent on how many cycle threshold amplifications ("Ct") that sample has gone through. Simply stated, that is how much the sample has to be magnified or amplified in order for the virus to appear as a positive test result.

The study below showed that at 25 Ct, 70% of "positives" are not live virus. The virus cannot be cultured. The test is effectively picking up dead DNA fragments of the virus and the person is not contagious. 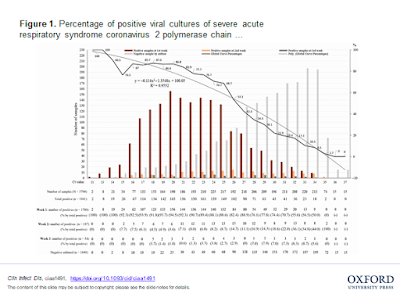 It has been reported that most U.S. labs are using a 40 Ct test standard. That means there is a LOT of potential to pick trace elements of dead or inactive virus fragments in the test.

Cycle thresholds are somewhat like seismographs. Each additional cycle doubles the augmentation and therefore increases the sensitivity of the test in picking up "something."

If 97% of the material in a 35 Ct PCR test is non-clinical viral material, I will leave it you to figure out how much live virus is likely to be in a 40 Ct test.

I will also leave it to you to ponder how many people have been given positive test results, and all of their close contacts have been told to quarantine, because of a PCR test that was done at 40 Ct.

It is beyond comprehension.

That is why I have said for a long time in these pages that the single most effective action the President (or Fauci or the CDC) could do to manage Covid would be to mandate that no PCR test use a Ct of more than 32-35.

It would have enormous positive implications immediately not the least of which we could focus our public health resources on those people who actually have an infectious virus and should be quarantined.

One of the largest effects would be on the hospital situation.

The narrative is that the hospitals are running out of room because of Covid hospitalizations.

Here are a couple of typical headlines that would suggest that.

However, the problem is not hospital capacity. There are plenty of inpatient and ICU beds.

These are the most recent HHS statistics on hospital capacity.

Does this look like there is any sort of national hospital capacity problem due to Covid cases? 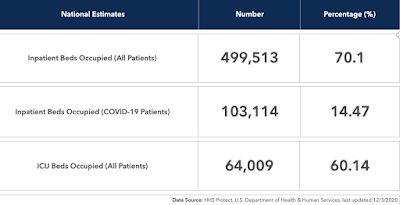 What problems there are in hospitals currently is largely due to staff availability and most of that is undoubtedly due to the quarantine rules which have been driven by the CDC and also by those faulty PCR Ct cycle thresholds.

If you get beyond the headline from the Idaho paper above you find that fact buried deep in the article.

"I had maybe one or two staff members out with COVID up until a few weeks ago, and then it just kind of all exploded, and we're down almost 40% of our workers right now, and it's really difficult," said Jeanie Gentry, CEO of Steele Memorial Medical Center in Salmon.

40% of staff infected with Covid? She doesn't say that. She says they are out. That is most likely due to quarantine procedures due to contact with someone with a positive PCR test.

I can't emphasize enough how harmful and disruptive that one simple cycle threshold test element has been in all of this Covid madness.

There was also news recently from the World Health Organization (WHO) which revised its numbers on the number of cases of Covid-19 cases worldwide.

It is now estimated that as many as one out of every 10 people in the world has been infected with the virus at some point according to the WHO.

On Monday, a top World Health Organization (WHO) official released the organization’s  “best estimate” for global COVID-19 infections, placing that number at 10 percent of the world’s population, or around 760 million people.

The bigger story in this is that left unsaid is that if that WHO number is accurate then the infection fatality rate (IFR) is far lower than original estimates.

In that there have been around 1.5 million global deaths attributed to Covid in the WHO statistics,  that translates to a .19% infection fatality rate. The seasonal flu is generally considered to have an IFR between .10%-.15% which would make Covid marginally more lethal than the flu based on those revised numbers.

You may recall that many of the early lockdown decisions were made under assumptions that the IFR might be as high as 3% or higher. In fact, the WHO initial estimate of the IFR for Covid-19 was 3.4% in March.

In other words, the potential fatality rate we were told we were dealing with in March was about 20 times higher than it has turned out to be.

As I have written about before, there were good reasons to be cautious in March and lockdown the economy and close the schools. We just didn't know. It made sense to be careful until we knew more.

We know a lot more now.

It is very, very difficult to make that case today if you truly say you are following the science.

We will undoubtedly learn more. That may require some additional changes in how we approach the virus and our reaction to it. It is true that much of science is continually evolving. That is the only thing we know to be true.

What has bothered me from the beginning of the Covid crisis is that the so-called "experts", the mainstream media and most politicians have been unwilling to acknowledge or admit that what they claim is "science" is anything but settled when they say it. However, they act as nothing they say is open to debate or discussion. It is "science". How can it be disputed?

Therefore, any contrary opinion or fact to that narrative is derided or is actually censored outright.

How is this in any way consistent with the principles on which this country are based let alone what has been the time honored and respected exchange of ideas within the scientific community when it comes to new and unsettled areas of discovery?

Let me close with one last thought.

If there has been one major criticism of President Trump on Covid since the beginning it has been that he has tended to be too optimistic. They argue that he should have been less positive about our ability to deal with the virus. Of course, Trump has argued that he believes that his role as the leader of the country was to inspire hope and confidence rather than incite fear and hopelessness.

For those who think Trump was too optimistic in his outlook let me show you the alternative.

This is Joe Biden yesterday telling us what he believes we are facing with Covid over the next four weeks. 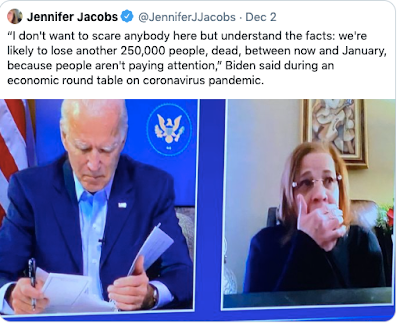 Biden doesn't want to scare anybody but 250,000 people are going to die by January?

I hate to say it but it does appear that good old Joe did scare that lady who was on the video feed with him.

Not only that but Biden is saying it is YOUR fault this is occurring because people aren't paying attention!

Here is the ABC News story on his remarks that even his mainstream media sycophants seemed to be confused about. They are even granting him the benefit of the doubt and giving him until the end of January on his prediction.

President-elect Joe Biden has issued a dire warning about the spread of the coronavirus over the next two months, predicting as many as 250,000 deaths.

Biden, who has warned of a “dark winter” ahead, did not offer details to back up his assessment, which is far bleaker than projections by the Centers for Disease Control and Prevention and other experts. His transition team did not immediately respond to a request to clarify the remarks.

ABC News helpfully pointed out that 272,000 deaths of those with Covid have been reported in the last eight months in the United States.

For those who don't think elections have consequences, let me present you with Exhibit A above.

The good news is that we have another "expert", "scientific" prediction on the record from a guy who says he always follows the science and the experts.

Let's check back in January and see if this "fact" is any more accurate than all the other "facts" we have been told over the last nine months.

In the end, Covid consistently has shown that reality revises the science.

It just seems that the "experts" (and those who blindly follow their pronouncements) are those most likely to fail to understand that fact.