In the early morning hours after election day Donald Trump had commanding leads in all of the major swing states.

This is what the vote count looked like in the key swing states before several of them "paused" or "stopped" counting votes in the wee hours.

When counting resumed a barrage of votes came in overwhelmingly for Biden. The source of these votes was a massive number of mail-in ballots that were held for counting until the end.

Of course, the huge number of mail-in ballots would not have been possible but for a substantial liberalization of the absentee ballot rules for this election.

As I wrote last summer, mail-in ballots are an invitation to fraud and our election systems were not set up to handle this volume of ballots and do the necessary safeguards to prevent fraud from occurring.

Our voting systems are not set up to handle volumes of ballots that are mailed in. All the systems (voting machines, poll workers etc) have been established for in-person voting where collecting and counting the votes is done with automated machines and identities can be checked (where voter ID is permitted) by poll workers. Even if voter ID is not required in a state, in-person voting requires a real person to show up in person at the polls which limits attempts at voter harvesting and other fraudulent acts.

Where we have ended up has been predictable in every way.

President Trump's challenge since those votes came in has been proving that many of those mail-in ballots were illegally cast and that the numbers were such that those illegal votes switched the election results.

It is abundantly clear that almost no scrutiny was done regarding signature verification or other safeguards that have traditionally been in place to insure that the mail-in ballots were genuine. The ballot rejection rates compared to previous elections show that conclusively.

However, proving this requires getting deep in the weeds that few are interested in doing. For example, sworn testimony by an expert was introduced in a Georgia legislative hearing showing evidence of thousands and thousands of illegally cast ballots. 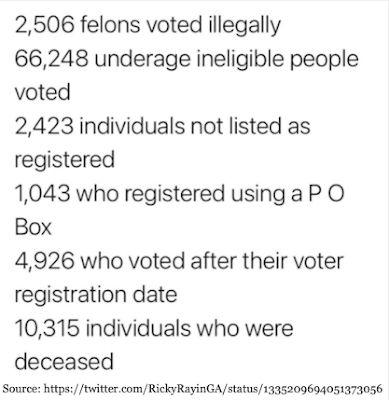 It did not matter. Despite this and a lot more evidence and questions about what went on Georgia's election (votes in suitcases counted after all the observers were told to leave etc.) the election results were still certified by the Governor and Secretary of State.

A week after the election I stated that Trump had an uphill battle despite an enormous amount of evidence in his favor. The volume of that evidence has been proven even greater than I anticipated at that time.

Trump may not prevail in all of this. It is very much an uphill battle once the votes have been counted. It is going to require that votes that have already been counted will have to thrown out.

No one is going to want to make a ruling to invalidate votes be it election officials, state legislators or the courts.

It is clear that claims and evidence of fraud are not going to do anything for Trump. No one has the courage to step into the issues in the depth it requires.

Today one clear path revealed itself that I believe gives Trump the best chance to overturn the election results.

The state of Texas filed an action in the Supreme Court claiming that the swing states of Pennsylvania, Georgia, Michigan and Wisconsin had illegally expanded mail-in voting in their states without those changes having been approved and sanctioned by the respective state legislatures.

For example, in these states the Secretary of State, election officials or others prescribed new liberalized rules for absentee ballot that were violative of existing state law and/or never approved of by the legislature.

As a result, the mail-in votes caused the election to be illegal in those states and violated the United States Constitution with regards to the Electors Clause as well as due process and equal protection under the law to those voters in states like Texas that followed the constitutional standard.

The court action poses a fairly simple and straightforward question for the Supreme Court of the United States to decide. This excerpt is taken directly from the brief that accompanies the lawsuit.

This case presents a question of law: Did Defendant States violate the Electors Clause by taking non-legislative actions to change the election rules that would govern the appointment of presidential electors? Each of these States flagrantly violated the statutes enacted by relevant State legislatures, thereby violating the Electors Clause of Article II, Section 1, Clause 2 of the Constitution. By these unlawful acts, Defendant States have not only tainted the integrity of their own citizens’ votes, but their actions have also debased the votes of citizens in the States that remained loyal to the Constitution.

You can read the full legal filings by Texas here.

The sheer breadth and scope of what these states did outside the purview of the state legislature is rather stunning when you read all the details.

Of course, the state officials have argued that it was all done in response to the "pandemic".

As I write this a number of other states have joined Texas in the suit. These include Alabama, Arkansas, Florida, Indiana, Kentucky, Louisiana, Mississippi, South Carolina and South Dakota. I would expect more might join the action.

This is the core underlying legal basis for the lawsuit as taken directly from the brief. 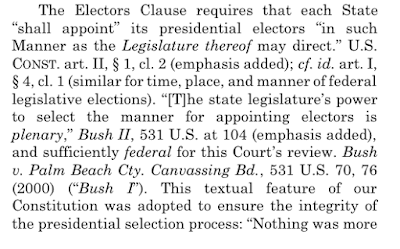 This case went directly to the Supreme Court because the U.S. Constitution provides that it is the court of original jurisdiction for lawsuits between the states.

I do not know if the Supreme Court is going to formally hear this case but it has asked the defendant states to respond by Thursday, November 10 at 3pm and case has been formally docketed. 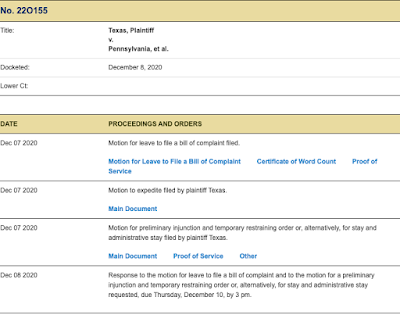 Time is short since the December 14 date for the electors to vote is on Monday.

Will the Supreme Court merely go through the motions and dismiss the Texas case after receiving the response from the defendants?

Or will they actually schedule oral arguments before the Court?

If this is done it would undoubtedly require that the Court suspend the electoral college vote pending that hearing.

If this case is dismissed I don't think Trump has any realistic options remaining that I can see.

If the Supreme Court would rule in favor of Texas the likely remedy is that the election in those states for President would be considered invalid and the Court would likely direct the state legislatures in each of those states to appoint their electors under their plenary power.

The votes of those electors would be the ones that would be opened in the joint session of Congress on January 6.

In that the state legislatures of all four states are controlled by the Republicans (both the Senate and House) you would have to believe that Trump would be on his way to reversing the election results.

However, how many never Trumpers are among those Republican officeholders?

How may Republicans still might fear reversing the result to Trump in their state due to a backlash from angry Biden voters?

This already seems to be on the minds of legislators in Georgia who are concerned about the fraud they see but also have an eye on what groups like Antifa or Black Lives Matter might do in the aftermath of a vote that recognizes the fraud. They are concerned if these groups burn down Atlanta that they will be blamed and not the protestors. (They don't think the media would tilt the story that way, do they???? )

It just goes to show what a sad state of affairs we are in. There is little concern for doing what is right. Everybody just wants to hide and and hope it goes away.

I have said from the beginning to get to the right result it is going to take some real COURAGE from somebody. 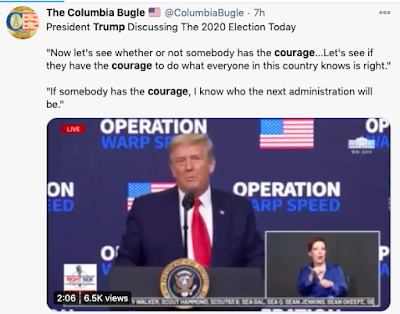 We are at one of the most consequential points in American history.

Do we have somebody who is going to have the courage to do what is right?

Or are they going to do what is convenient and comfortable?

If the fraud and total disregard of the Constitution is ignored have we lost our country?

How do we survive as a representative republic if we are unwilling to face and confront this issue now?

When will we ever be able to trust the vote again?

This country had kicked the can down the road on slavery for over 80 years.

No one had the courage to take it on. It was easier to ignore it and carry on. It was convenient and comfortable.

One man stood up and had the courage to take a stand for both individual rights for all and a nation that was indivisible. He knew the issue could not be ignored any longer even though there would be costs.

Could there also be a price to pay now to do what is right?

However, I can guarantee that the future cost will be much, much higher.

Lincoln understood that in 1861. However,  history has proven he made the right decision.

The Supreme Court has before them the simplest and most straightforward manner to deal with this issue now. It is exactly in keeping with the Constitution and the original compact between the states that forged that document.

Trump may still not win even if Texas wins the case and state legislatures with GOP majorities select the electors in those swing states. However, we will know that the Constitution and our system of justice still means something.

We can only hope they decide wisely.

I don't want to contemplate the alternative over the longer term.

It will carry an incalculable cost for us all.