What's Next With The Economy?

What's next with the economy?

What can we expect as we struggle to get beyond the Covid economy of 2020?

However, that national unemployment is misleading as there are large differences in the unemployment rate as you look at different states.

There is little doubt that the stricter economic lockdowns instituted by blue state governors has come at a very high economic cost.

What I have found troubling since the beginning of the pandemic is how much of that cost has fallen on the working class in this country. This is a group that Democrats have traditionally stated that they are looking out for. It is certainly not apparent when looking at what has been done this year.

Personal income was down an average of 10% in the third quarter compared to the second quarter of 2020.

This chart shows the change per state.

These changes take into account the fact that the second quarter was bolstered by Covid stimulus checks and extra unemployment payments that were not there in the third quarter. 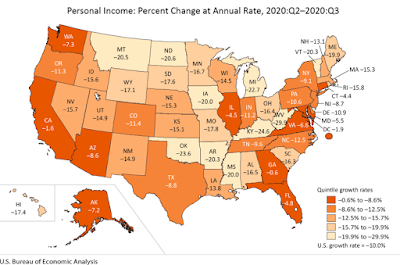 This appears to be pretty clear evidence of the bifurcated economy that has been created by Covid.

Technology, financial services and government have been largely unaffected or have actually benefited from Covid.

People who these sectors have done extremely well while others have been struggling. Those averages can be misleading in states like California. Techies are making a lot of money while almost one in ten are unemployed.

This is a chart of the stock prices of Apple, Amazon, Facebook, Google and Netflix over the last year.

Covid has been very good for all of them.

It has been a good year for income on Wall Street with the increase in the prices of financial assets. Wall Street bankers have done well while others are out of work.

Despite Covid, if you had money to invest there was almost no place that you would not make money this year.

That has been the case for most of the Trump presidency (except 2018) as this chart from @Charlie Bilello indicates. Hat tip to Charlie for a number of the charts below.

Of course, we also know that government always gets paid no matter the situation. Very few government workers have had to suffer the loss of income during the Covid crisis.

Many got paid this year even when they did not work.

It is a lot easier when your revenues come from taxes that you can force people to pay or you can just print the money to pay your bills.

The printing presses have been running at full speed this year.

Many in the private sector have not been so lucky.

Here are the percentages of small businesses that were not open as of November 30 compared to January 1.

43% of small businesses are closed in Washington, DC while government employees have not missed a paycheck? How is that fair?

Congress finally appears to be on the verge of passing another Covid relief package that Nancy Pelosi has been blocking since the summer months. Apparently she was more interested in hurting Donald Trump than in helping Americans that were hurting economically.

The final package will be almost identical to a package that Senate Republican leader Mitch McConnell and the White House offered Pelosi in August.

Reports are that it will provide a direct stimulus payment of $600 to most Americans, $300 per month of additional unemployment benefits and direct subsidies for schools, health care providers and renters facing eviction. The airlines and other hard hit industries may get direct assistance.

How much will this help the economy leading into 2021?

The manner in which the prior $1,200 payments were spent does not suggest a big boost to the economy.

Less than half of those payments were spent according to this analysis.

About 30% were saved and another 30% went for debt payments. 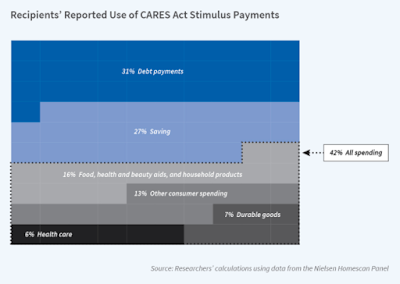 The problem that the economy has now is that the velocity of money has dropped like a rock.

What is the velocity of money?

A dollar used to purchase something from a shopkeeper which in turn is used by that shopkeeper to go out to dinner which is then used by the restaurant owner to go on a vacation. That would indicate a velocity of three for that dollar.

Look at this comparison of the increase in Federal Reserve assets compared to monetary velocity this year. 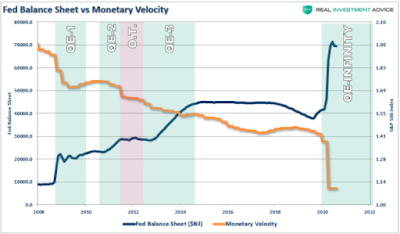 Where has most of the money that has been printed gone?

It has not gone into support of the basic economy. After all, there are limited places to spend it if you can't spend it at restaurants, people are not traveling, going to concerts, attending sporting events and the like.

That is why the velocity of money is down.

Where do we go from here?

Stock prices are at all time highs.

Housing prices are at all time highs.

Corporate bond yields are at all time lows.

Mortgage rates are at all time lows.

Where does anyone invest their money for a future return when you are sitting on top of the mountain?

And the mountain you are sitting on is made up of stacks and stacks of printed paper bills that have been created out of thin air?

For example, increased earnings have not driven the increase in stock market values.

Earnings are down an estimated 23%. However, overall stock prices are up 15%.

The S&P 500 is trading at the highest trailing twelve-multiple it has in over 30 years.

I don't think I have seen a tougher environment for trying to figure where to invest money in my lifetime. This is where we are as 2021 is upon us.
I wrote earlier this year that the United States was very fortunate to be in the economic shape it was when the pandemic hit. Can you imagine where we would be if the unemployment rate had been high and the stock market struggling when Covid hit?
GDP growth numbers show that the United States has fared better than most other countries in the world over the last year.
Many of the other developed countries in the world had negative GDP growth in the first quarter in which the United States still showed positive growth despite the lockdowns beginning in the middle of March.
Canada, China, France, Germany, Japan, Italy, Spain and the U.K. all were negative in the first quarter compared to the +.3% GDP growth in the U.S.
The United States was down 9% in the second quarter but that was still less than most major economies except China.
The U.S. continued to outperform most other major economies in the third quarter.
What's next with the economy?
It is anyone's guess.
However, if you are Donald Trump it might actually be better to be denied a second term due to election shenanigans and fraud by the Democrats.
It does not look like there are a lot of great investment opportunities out there right now.
In addition, the longer the economic lockdowns continue in the blue states the harder it is going to be  for the economy to come back.
New York and California are already seeing the exodus of thousands of highly paid professionals.
Here are the change in average median asking rents in the 17 most expensive rental markets over the last year and from their record highs. 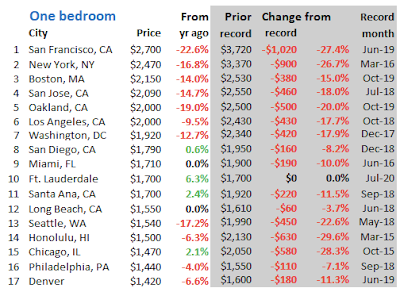 There are landlords who own these rental properties with loans on these properties on which the monthly debt payments will get harder to pay with every month that rents decline. They also owe real estate taxes to these cities which they will struggle to pay.
Rents on office and retail space in many cities are also not going to be paid.
The values on these properties will decline which should also cause real estate taxes to be lowered which will inevitably put more pressure on the budgets of these cities.
Every day small businesses stay closed the odds also get longer they are going to be able to reopen again.
Every closed business will inevitably mean tax collections will go down.
The Democrats economic playbook always seems to look first for government spending to be the engine for economic activity.
How large can the government deficits get?  How much money can be printed out of a thin air? How do you raise taxes in an economy on life support?
We saw Donald Trump position the country in a short period of time such that the wind was at our back before Covid landed on our shores from China.
The wind has changed.
There is no wind behind us. We enter 2021 facing gale force winds.
We better have a Captain that knows what they are doing in steering the ship of state.
It will not take much for this ship to start taking on a lot of water. When this happens the first reaction is always to start bailing out the water. At some point you realize you can't continue to bail out the ship. You find you are in too deep.
It looks to me as if we are already in deep waters.
Standing on the shore may prove to be the best place to be the next few years
Donald Trump may find himself there and in time be very thankful he is.
The rest of us may be find ourselves stuck on a leaky ship that we made clear we did not wish to get on seeing an approaching storm and with a captain and first officer who do not seem to have the slightest idea about what they were doing.
2021 is just over the horizon and the skies look awfully dark.
God help us!
Posted by BeeLine at 9:43 PM