A Retrograde Force Is Upon Us

Winston Churchill once said this about Islam.
"No stronger retrograde force exists in the world."
He wrote this in his book River War about his experiences during the Mahdist War in Sudan.

How dreadful are the curses which Mohammedanism lays on its votaries! Besides the fanatical frenzy, which is as dangerous in a man as hydrophobia in a dog, there is this fearful fatalistic apathy. The effects are apparent in many countries. Improvident habits, slovenly systems of agriculture, sluggish methods of commerce, and insecurity of property exist wherever the followers of the Prophet rule or live. A degraded sensualism deprives this life of its grace and refinement; the next of its dignity and sanctity. The fact that in Mohammedan law every woman must belong to some man as his absolute property – either as a child, a wife, or a concubine – must delay the final extinction of slavery until the faith of Islam has ceased to be a great power among men.

Individual Moslems may show splendid qualities. Thousands become the brave and loyal soldiers of the Queen; all know how to die; but the influence of the religion paralyses the social development of those who follow it. No stronger retrograde force exists in the world.

A retrograde force is not moving things forward. It is moving things backwards and that normally means reverting to an inferior condition. 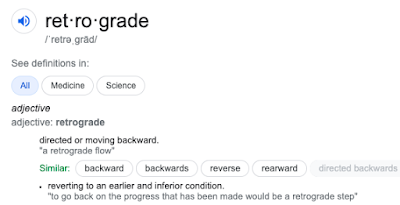 That certainly seems to be the case with those who want to practice strict forms of Islam with Sharia law and the subjugation of women. It is as if these people prefer to turn the clock back to the 14th century.

Retrograde also comes to mind when I see what seems to be unfolding in the United States right now.

I am not suggesting that we are dealing with anything like Islam but it certainly can be said that we are not living in a progressive world where things are moving forward and advancing.

Look no further than the censorship and curtailment of free speech that we are seeing every day. We are seeing things that I never thought I would see in the United States of America. It is a retrograde force.

You also see it almost daily in the statements and action of the Biden administration.

It seems to be a continuing retrograde force.

We saw it on the the first day of the new administration where the new stated policy is to favor transgender athletes over women athletes. Women's athletics will be the victim of this retrograde force.

We saw it with the cancellation of the Keystone Pipeline project and oil and gas fracking and drilling on federal lands. America's hard earned energy independence will be the victim of this retrograde force.

No where is the retrograde force more apparent than what Biden is proposing with regard to the nation's schoolchildren under its proposed Covid policies.

Biden has stated that it is his goal to see 50% of children in some form of in-person school learning at least one day per week within 100 days.

The reality is that more than that 66% were already receiving in-person classroom instruction at the time that Biden stated that was his goal. 40.8% were in class five days per week and 25.6% were in class for part of the week.

Apparently Biden wants to close schools rather than open them.

The CDC under Biden is proposing that K-12 grades can only have full in-person instruction if they are in the blue or yellow transmission categories in this matrix. 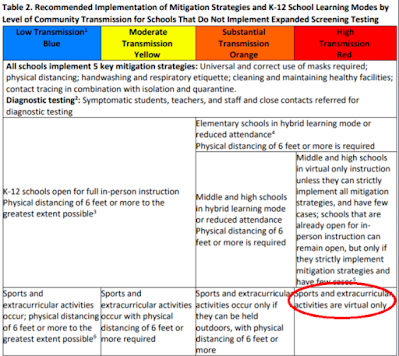 Note that if the county in which the school is located is "Red" then all sports and extracurricular activities are "virtual" only. It is not clear to me how you play baseball, softball, tennis or lacrosse or participate in track and field virtually. At the same time, many schools around the country have successfully been conducting basketball and other INDOOR sports all winter without major effects from Covid. Would this not be a retrograde policy?

This is how the color coded categories are defined. 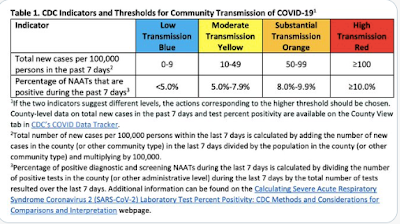 This is a map of the United States showing how the 3,006 counties stand as of February 12. 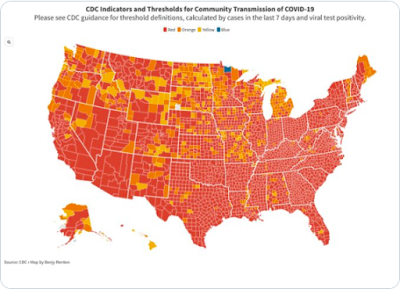 This is how the House Republicans summarized what Biden has proposed and how he has kept changing the goal posts.

This suggests that Biden wants almost all schools closed to in-person instruction even though over 60% of the nation's schools are already open.

Biden's policies would actually cause schools that have been open for in-person instruction for the entire year to close.

Even worse, Biden's policy would not even comport with the SCIENCE he says he will always follow.n

Biden's CDC Director even admits that the science has shown that Covid spreads more when schools are closed than when they are open.

Look at this chart that compares Florida, Ohio, Illinois and California.

Florida actually has the lowest number of pediatric cases (ages 0-14) of any of these states.

You also see that having the schools open has not meant that Florida has seen any greater community spread.

Here are the cases per million in Florida since the outbreak began.

It is interesting to note that both Florida and California had their first peaks in the months of July and August when the schools were closed for summer break anyway. 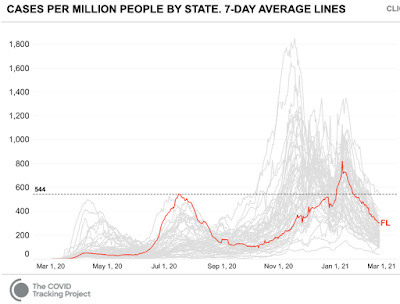 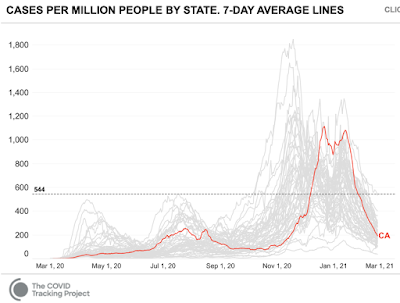 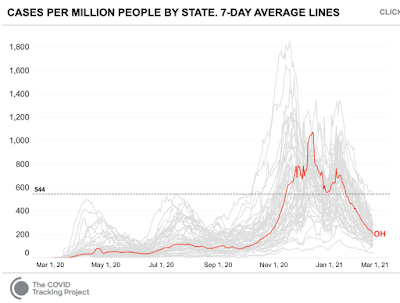 Note that that there is almost no difference in the case curves between Ohio and Illinois despite many more schools being closed in Illinois. 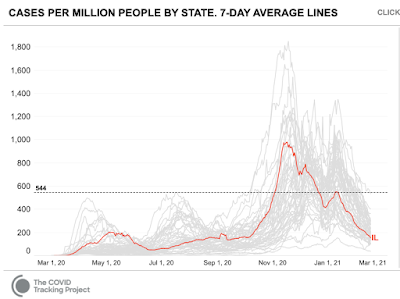 Biden has also tied the reopening of schools to passage of a Covid relief package. He has stated since he was running for President that schools could not open unless there was more money for increased testing, improved ventilation systems and additional funds for increased social distancing in the classroom.

The proposed administration bill provides for $128.6 billion for the Elementary and Secondary School Emergency Relief Bill.  This is on top of $112 billion that has already been made available to schools in previous Covid relief packages.

However, only $6 billion of the $129 billion in proposed outlays is to be spent in 2021.  The bulk of the outlays are proposed for 2022 to 2025 raising the question as to what this has to do with opening the schools and Covid?

If Biden is saying that schools cannot safely open until this money is available, and used to retrofit schools, are parents supposed to expect their children will still be in virtual learning until 2023 or 2024?

Is this all about the children and opening schools or is it just a slush fund for the teachers' unions?

It seems that the teachers' unions come before any science with Biden and the Democrats.

Perhaps Biden will admit the errors in his retrograde ways.

For example, do you remember when Biden said this about Covid on January 21?

“Let me be clear: Things are going to continue to get worse before it gets better”

This is a chart that shows what has occurred in the United States since he made that statement. 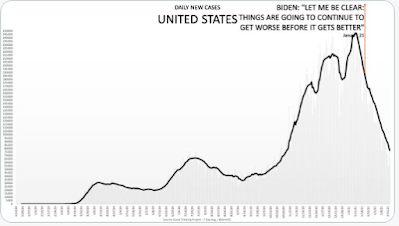 Biden now portrays himself as a progressive but his policies and actions seem to have a retrograde force about them.

Can the retrograde force get even worse?

Far left groups are not happy that Biden has merely halted any further construction of the border wall between the United States and Mexico.

They actually want Biden to tear down the wall.

That sounds like a very constructive proposal doesn't it?

How much would that cost? And what would the resulting costs be to our country in having a completely open border? I believe we have had experience with that issue before.

A retrograde force is upon us.

It is more apparent with each succeeding day.