I am old enough to remember when the International Olympic Committee and others zealously protected the integrity of women's sports by insuring that the participants did have not high levels of male hormones in their systems.

The rather simple concept was that it was not fair for women to be competing against competitors that were not biological women. If not, women were put at an unfair advantage and were the subject of discrimination.

East Germany was particularly know for injecting male hormones into their female athletes to increase athletic performance. This practice was particularly profound in the 1970's and 1980's.

After Germany was reunited, that country's Olympic Committee admitted that doping had taken place under the Communists and a number of former athletes were given financial compensation for subsequent medical and psychological problems and children they had delivered with birth defects.

Keep in mind that in past years the concern was with actual biological females that had enhanced testosterone in their bodies that provided a physical and performance advantage. Female athletes from some other counties have had medals taken away or been banned from competition because tests showed that they had abnormal testosterone levels in their bodies even without evidence that it had been modified by doping.

It is amazing to consider that all of this concern for the integrity of women's athletic has been thrown out the window due to a newfound allegiance to "transgender rights and equity".

We have now reached a point where "transgender rights" takes precedence over "women's rights". We are putting the rights of a tiny fringe segment of society over half of the population.

Although Joe Biden and the Democrat party talk a lot about science it seems to not matter at all when it comes to this issue. It doesn't matter even if the science is clear cut that males generally possess more size, strength and speed than most females.

For example, consider these facts that were presented in a Duke University Law School article that compared athletic performances in 2017 between the best woman in the world compared to under 18 year old high school boys. 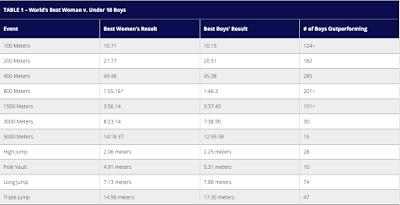 Here is the table that compares the best women's result to the number of men of all ages who outperformed that result.

4,801 men performed a better long jump than the best woman. 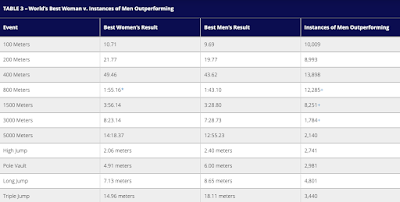 The same is true of Olympic, World, and U.S. Champion Allyson Felix’s 400 meters lifetime best of 49.26. Just in the single year 2017, men and boys around the world outperformed her more than 15,000 times.

This differential isn’t the result of boys and men having a male identity, more resources, better training, or superior discipline. It’s because they have an androgenized body.

This used to be called SCIENCE.

We have now reached a point where all it takes is for a male to "identify" as a female and they must be permitted to compete as a woman in any school or university in the United States or they risk losing any federal subsidies?

What is really amusing is seeing the ACLU weigh in on this. I guess some people's civil liberties are more important than others.

They claim there are four major myths at play here. 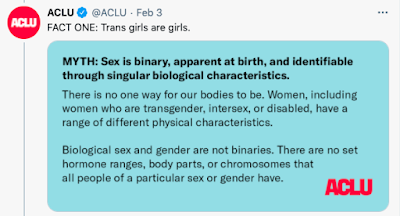 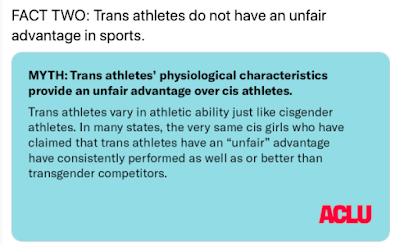 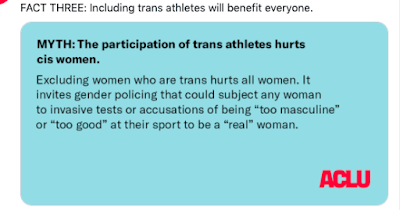 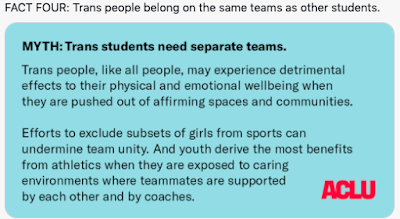 Look at all these "myths" and tell me after looking at this video what the real facts and science are on this subject.

Is this fair to women?

In 2019, competing as CeCe Teller, this athlete ranked 1st in NCAA Div II women's 400m (30in) hurdle. And this after taking a year off for hormone therapy.
Remember that what you see with your own eyes is nothing but a collection of myths.

I wrote about this subject five years ago. We were already on a slippery slope at that time. That slope has now taken us right over the cliff.

There is no sense and certainly no sensibility in any of this.

No Sense and No Sensibility

There seem to be many things that no longer make sense in our world today. Sensibility seems to have been replaced with an utter disregard for human nature, behavior and science.

Nowhere is this more apparent than in the moves to obliterate the laws of science regarding gender.

I couldn't help but think of the lack of sense and sensibility in this regards as I looked at a couple of stories that were in the headlines in the last week.

The first was the vote in the U.S. Senate that would subject females to register for Selective Service so that they might some day be drafted into the Armed Services.

The second was the story of a high school senior who is a biological male but who "self identifies" as a female and was allowed to run as a girl in the state track meet where he (she?) won all-state honors.

Let me say at the outset that I am the father of two daughters so I am very sensitive to providing equal opportunities to them. They should be able to do anything that they set their minds to. That is the way they were raised by my wife and I. However, there are substantive biological differences between males and females. You can "self-identify" all you want in your head but that does not change the basic biology.

There is no way that my daughters (or granddaughter) should be subjected to the obligation of potential military service via the draft. If they would like to serve by volunteering, that should be their choice. However, we have lost all sense and sensibility if we are going to start drafting women for combat roles.

Do not be deceived, the only reason for a draft is to fill ground combat positions. That has always been the purpose of conscription. As I wrote previously on the subject, "Opportunity or Obligation?",

Conscription is normally necessary to fill combat positions in the Army.  For example, 95% of all inductees to the Army during the Vietnam War were draftees while the Air Force, Navy and Coast Guard were able to fill almost their entire quotas via voluntary enlistments. Of course, the threat of being drafted into the Army becomes a great incentive to volunteer for potentially safer and softer postings in the Armed Services.

I have argued in these pages previously that the drafting of women was the next step in the slippery slope of pushing for more equality on the battlefield. It appears that we have arrived at that point.

What is the point in all of this?  Especially when you look at the results of recent changes the Marine Corps has made in its fitness requirements to objectively determine who can handle the physical demands of combat. The quote below is from a story in the Marine Corps Times on how men and women are doing on the new tests which are given 45 days into basic training.

In the last five months, six out of seven female recruits — and 40 out of about 1,500 male recruits — failed to pass the new regimen of pullups, ammunition-can lifts, a 3-mile run and combat maneuvers required to move on in training for combat jobs, according to the data.

The first interesting data point in this information is that only seven female recruits have even attempted to go through the first phase of Marine Corps basic training leading to combat roles----compared to 1,500 men!
The second point is that 86% of the females failed to meet the standard!  The comparable failure rate for men---3%!
Drafting women? No sense and no sensibility.

What about a male running as a female in the state track meet because that is the way he "self identifies"?
Again, no sense and no sensibility.
I have some personal experience in the athletic realm pitting boy against girls at the high school level.
My youngest daughter was a very good high school field hockey player. In fact, she was an All-Western Pennsylvania player her senior year in addition to being the leading scorer in the Pittsburgh area.
Pennsylvania had a rule that allowed girls (or boys) to play on the teams of opposite genders if the sport was not offered to them. Thus, for example, a girl could play on the boys' golf team if there was no girls' team. All well and good for giving girls the opportunity to compete.
However, what about the opposite?
We found out how that works when in my daughter's junior and senior years a couple of boys played on one of the other schools' field hockey team.  Our team won the games against that school because field hockey is very much a skill sport. To be successful you have to be good at handling the stick. However, the size and speed difference of the boys was very apparent as I watched those games. Here was my daughter at 5'3" and about 110 lbs facing off with 6'0', 180 lbs. bruisers. It made me cringe and it made my daughter and her teammates mad about having to compete against members of the other gender.

It also made me wonder what would happen to girls field hockey if a school fielded a team of 11 boys who were willing to put on skirts and practice their stick skills for a few years?
It is the same thought I had looking at the story of the state track meet in Alaska.
If we are to allow people to "self-identify" on what gender they are, we could soon have very few female athletes participating on the athletic field in many sports.
There are women that are stronger, faster and more athletic than many men. I don't think many men would want to challenge Brittney Griner to a game of one-on-one basketball, Serena William to a game of tennis or Allyson Felix to a 100-meter dash.  There are overlapping bell curves with respect to the physical abilities of men and women. Some women will always have better physical abilities than some men. The Marine Corps data shows that. However, most men will enjoy physical advantages over most women.
Think for a moment if Bruce Jenner had not won the men's gold medal in the Decathalon in 1976 and decided he wanted another chance at gold 8 years later in Los Angeles in the Heptathalon (the female equivalent event)---as a woman.  Glynis Nunn of Australia won the gold and Jackie Joyner won the silver at that Olympics. I doubt either would have beaten Bruce Caitlyn Jenner eight years past his her prime.

Think for a minute if all the boys on the JV basketball team at a high school decided they would "self identify" as females and tryout for the varsity girls team? How would you stop them in a world that increasingly has no sense and no sensibility?
We should take a step back and think of where all of this gender neutrality talk is taking us.
I can assure you that it is not a good place. For men...or women.
There is no sense or sensibility in any of it.
Posted by BeeLine at 9:00 PM