Joe Biden is a mystery to me.

Is he incompetent, incapable or ill-advised?

Or has he been a politician for so long he can't tell the difference between fact and fiction?

For example, last week in a Town Hall meeting on CNN Biden stated that "we didn't have Covid vaccine when he took office.

President Biden claimed at one point during a CNN town hall on Tuesday that his administration came into office with no coronavirus vaccines available.

Let's give Biden the benefit of the doubt and say he just misspoke or made another gaffe as he has been famous for during his entire career.

After all, he has to remember that he had already received two doses of Covid vaccine before he even took office, doesn't he? Let's hope he isn't that far gone.

Of course, we know that the mainstream media would not have given President Trump the same grace that I just did for Biden. We would be told that Trump lied and people are dying because of it, wouldn't we? Such is the double standard that is in full view every day when we compare the press coverage of Biden and Trump.

More likely, Biden was attempting to claim that the vaccine supplies were inadequate when he took office.

This was revealed a couple of days later when Biden said Trump failed to order enough vaccine doses. Apparently this is a narrative that the Biden administration wants to get the media to repeat.

Let's look at the actual facts about the vaccine orders under the Trump administration.

Those facts show just how incompetent, incapable or ill-advised Joe Biden is. You should also shudder to think what we would have with vaccine supplies if Biden how been in charge last year rather than Trump.

Let's recall that most every expert said that it was next to impossible to have a vaccine ready for distribution anytime in 2020. Most laughed off Trump's statements that we would have a vaccine in the Fall.

Most vaccines take at least 10 years to develop and test.

An optimistic timeline last May was that the Covid vaccine could be developed in 18 months. I wrote at that time that I thought it was impossible to produce a vaccine that quickly. I published this chart at that time to show the Covid timeline compared to other vaccines. 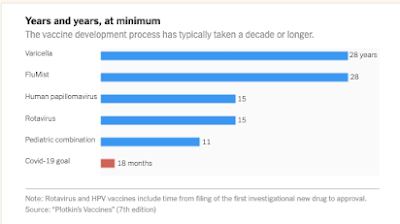 President Trump insisted at that time that the timeline should be cut in half---to nine months.

The experts said it was impossible. If it happened it would be a "miracle".

Consider this observation by an expert in the field in May, 2020 who said it would be a "miracle" if a Covid vaccine was available in 12-18 months.

Dr. Afzal Siddiqui, a professor of internal medicine, immunology and molecular microbiology and director of the Center for Tropical Medicine and Infectious Diseases at Texas Tech University Health Sciences Center, has been working on a vaccine for the parasitic disease schistosomiasis — also called snail fever — since before his son was born.

Today that son is a physician. And Siddiqui just started clinical trials in humans in the United States and Africa last year.

“The chances of getting every piece of the puzzle in place in 12 to 18 months ...” Siddiqui pauses as he contemplates a COVID-19 vaccine. “If it happens, it will be a miracle.”

Dr. Fauci himself said in July that the vaccine was not likely before early 2021.

Peter Hotez, one the top experts on vaccines in the world, suggested it could not be accomplished before mid-2021.

Peter Hotez, the dean of the National School of Tropical Medicine at Baylor College of Medicine in Texas, says that collecting enough data to prove a vaccine is safe for the world could take until mid-2021.

The Atlantic featured an article in July that was pretty typical at that time regarding prospects for a vaccine.

Biologically, a vaccine against the COVID-19 virus is unlikely to offer complete protection. Logistically, manufacturers will have to make hundreds of millions of doses while relying, perhaps, on technology never before used in vaccines and competing for basic supplies such as glass vials. Then the federal government will have to allocate doses, perhaps through a patchwork of state and local health departments with no existing infrastructure for vaccinating adults at scale.

Keep in mind that Trump had to make the decision back in the summer about how many vaccine doses to order and which producers to place bets with. At that time, no one knew which vaccines, might be effective, if any.

There was the real chance that billions of taxpayer dollars were being committed to vaccines that would never be utilized.

What did Trump do?

He did what any savvy businessman would do. He hedged his bets and spread the risk. He did not put all his eggs in one basket. He placed orders with six different vaccine manufacturers.

By the middle of August the Trump administration had placed orders for 800 million vaccine doses with six different producers. He secured an option for another 1 billion doses in the future.

Biden is saying that Trump did not order enough vaccine? This has to be one of the most outrageous claims every made by anyone and I have not seen one news source question Biden on this assertion.

The orders by the United States represented 40% of all the global orders placed at that time. The reality is that without the orders by the USA the vaccine producers would not have had the capital resources to even think about producing the vaccines.

The fact is also that the USA and the UK and other wealthier countries were criticized by many experts at that time who argued that these countries were practicing "vaccine nationalism" and they should not be securing the vaccines for their populations. This view was shared by many liberals.

The rush is dispiriting for public-health experts who have urged that vaccines be equitably distributed across the world. “We’re not going to get rid of the pandemic until we get rid of it everywhere,” says Mark Feinberg, head of the International AIDS Vaccine Initiative in New York City, which is developing a COVID-19 vaccine with US drug company Merck. “We need to prevent vaccine nationalism,” said Tedros Adhanom Ghebreyesus, the director of the World Health Organization (WHO), at an 18 August briefing.

Here is an NPR article from November that claims that the United States, UK  and Canada are unfairly ordering too much vaccine.

Several countries, including the U.S., Canada and the U.K. as well as members of the EU, are reserving enough potential doses of different types of vaccines to immunize their entire populations several times before some poor countries have any vaccine at all. For example, the U.S. and the U.K. will potentially have enough to cover its population four times over. And Canada could have enough to immunize its population five times.This chart from Nature magazine shows the status of the orders for vaccines as of mid-August.

Here is a chart that shows that vaccine capacity and pre-orders that were made as of last summer when no one even knew whether any of these vaccines would be effective.

Note that the United States was the only country who had placed an order with Moderna at the time.

Europe had placed most of its bets on Astra Zeneca. This vaccine has still not gotten emergency use authorization in the United States. It is not expected to be authorized for use before April.

The same is true for the vaccines from Novavax, J&J and Sanofi. Notice as well that the orders placed as of last August exceeded all production capacity that the vaccine producers had for 2021.

The fact is that the orders that were placed were well beyond what could be produced in the first couple of months anyway.

The reality is that last summer no one knew which vaccines were going to be effective. For Joe Biden to criticize Trump for not ordering enough vaccine supply is at odds with the facts in addition to be completely and utterly dishonest.

Joe Biden should be thanking Donald Trump every day for his leadership in pushing the vaccine development forward and delivering a miracle that almost no one thought possible.

Is Biden incompetent, incapable or ill-advised? Or does he not have ability to separate fact from fiction resulting from a half-century in politics?