We are often warned that we should not confuse correlation with causation.

The fact that there is a correlation between two events does not mean that one necessarily caused the other.

Coincidence may be the reason even if there is a strong correlation.

Correlation, causation and coincidence have gotten a lot of attention in the Covid world we live in today.

For example, why has the seasonal flu almost completely disappeared this year?

Flu cases are down 98% compared to the average of the last five years.

Hospitalizations are down 98.4% compared to last year.

Thankfully, there has just been one pediatric death from the flu this year. Deaths from flu for children have averaged 176 annually over the last three years.

When Dr. Tony Fauci was recently asked why the seasonal flu has almost completely disappeared this year his explanation was that it was due to people wearing masks and social distancing.

Fauci seems to have made a correlation and attributed causation without anything to support his conclusion.

If what Fauci says is true, why have the masks and social distancing not had the same effect on Covid? It is also a respiratory virus that is transmitted in the same manner as the flu.

You may also recall that Fauci and other "experts" were predicting last Fall that we were likely heading into a "twindemic" this winter as we would be dealing with both a tough Covid and flu season.

Healthcare experts are urging citizens to get the flu shot this year due to fears of a “twindemic” – surging COVID-19 cases and a severe flu season. With a twindemic looming, it is more important than ever to get your flu shot – especially for seniors and children. Getting the flu shot can “blunt the effect of one of those two potential respiratory infections,” according to Dr. Anthony Fauci, director of the National Institute of Allergy and Infectious Diseases.

I questioned that prediction in these pages in October based on data that suggested that the flu had all but disappeared during the winter season in the Southern Hemisphere. That data suggested to me that in some way Covid may be blocking the flu virus from replicating in the population. It is almost as if Covid is bigger and stronger so that the flu cannot get established in the community when Covid is present.
We see the opposite conclusion by the "experts" concerning correlation and causation in this story about four Kentucky nursing home residents who died on the same day they were vaccinated. Interestingly, three of the four had previously had Covid and recovered.
That suggests a pretty strong correlation that should require further investigation regarding causation.
What did the CDC state when asked about these cases? All of the deaths were dismissed as mere coincidences.

In response to questions about the Kentucky cluster, a spokesman for the Centers for Disease Control (CDC) said its experts noted “no pattern … among the [Kentucky] cases that would indicate a concern for the safety of the COVID-19 vaccine.”

The same thing was said when a 78-year old woman in California died a few minutes after she received the vaccine on Friday.

She died of "something else" according to health officials.

Have you noticed a pattern regarding Covid when it comes to correlation, causation and coincidence?
Anything that helps in supporting the "narrative" is positively correlated. If cases are going down it is because masks are working. If cases are going up it is because people aren't wearing their masks.
Any Covid positive test within 60 days of any death is attributed to Covid. Any adverse reaction or death, even within minutes of taking the Covid vaccine, is written off as a coincidence.
Are the Covid vaccines responsible for the steep drop in cases in the United States over the last month? That could be a contributing causal factor. However, the relatively few that have been vaccinated thus far (approx. 12%) should not have that large an effect to this point. 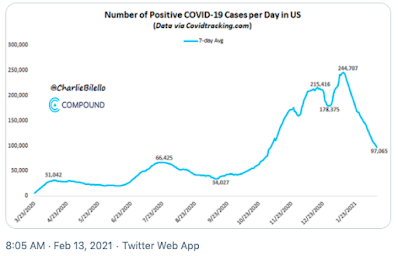 Israel has vaccinated a higher percentage of its population than any other country in the world. 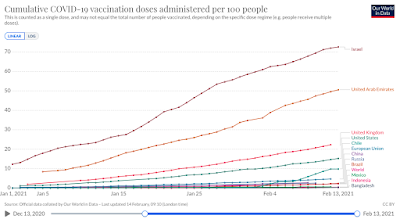 However, Israel has a higher number of new cases of Covid today than it did when it began the vaccine program on December 19, 2020.
In recent weeks new cases have dropped in Israel but they have not fallen as quickly as they have in the United States that has a much lower vaccination rate.
Is there a correlation anywhere? Causation? Coincidence?
It is particularly interesting to compare cases in Israel with the Palestine territory.
New confirmed cases per capita in Israel and Palestine were almost exactly the same on December 23 on the chart below (where the red and blue lines cross) four days after the vaccine program started in Israel. Palestine has vaccinated almost no one.
Notice how Israel's cases exploded upwards right after the vaccine program began and Palestine's cases starting falling. 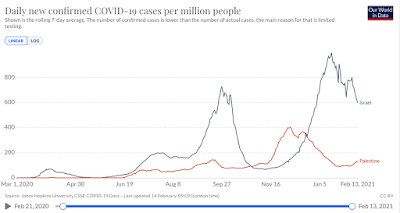 I am not suggesting that the vaccine is causing the new cases but this data is contrary to the narrative we hear on the news.
Is it merely a coincidence?
What about the narrative that lockdowns are the answer? We are told that California and New York have done it right and Florida has been irresponsible in being so open and not having a statewide mask mandate. Do you see any correlation in the data?
Is the lower hospitalizations in Florida just a coincidence?
I don't know but I do know that the "experts" should be studying these issues with some rigor rather dismissing the data because it may not fit their narrative.
Take a look at this map of the number of global deaths from Covid since the pandemic began. 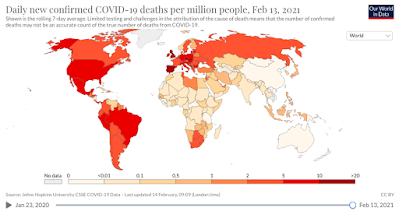 What jumps out at you?
Notice how there have been relatively few deaths in Africa, the Middle East, Asia and Oceania compared to North and South America and Europe.
This is despite the fact that countries like India, China, Japan, South Korea, the Philippines and Nigeria are among the nations with the highest population density in the world. Crowded living conditions is supposed to be a recipe for the spread of Covid.
What is the correlation if it is not population density or some type of genetic component? It seems that Covid has had a bigger impact in richer countries than poorer countries. Are there more deaths because richer countries are doing a better job of counting deaths? Is it because those in richer countries are more susceptible to the virus because of their lifestyles? Are we seeing more deaths because the richer countries and more consumed with social media and incessant Covid reporting?
I don't know what the correlation and causation is but the data is undeniable.
Here is another correlation that I found interesting.
Compare Covid deaths with a world map of where gay marriage is legal.
Look at the map above on global deaths and compare it to this map on where gay marriage is legal. 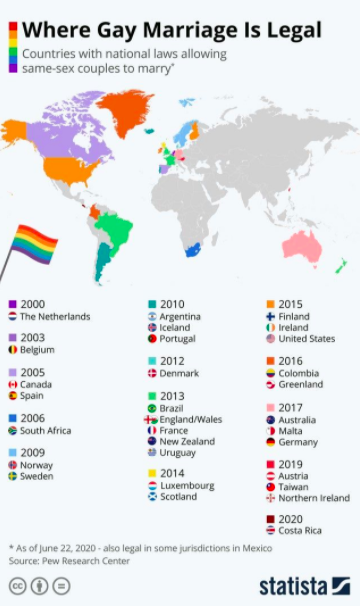 Gay marriage and Covid deaths have a remarkable correlation even down to South Africa being the only country in Africa that has legalized gay marriage while also having the highest number of Covid deaths per capita on that continent.
Of course, gay marriage is not causing Covid. However, it might be that the progressive mindset that underlies a nation's belief system that legalizes gay marriage may have something to do with how  society reacts to the virus and how it categorizes deaths.
My advice on anything to do with Covid is to beware of the correlations that you hear concerning the virus and the causes and effects that are attributed to it.
At some point Covid will not be a threat and many correlations will be made as to what caused it to go away.
Was it the masks?
Was it the vaccine?
Was it keeping schools closed?
Did the virus just burn itself out?
Making correlations are easier than determining the causations that are in play with Covid.
Of course, it is also not helpful for the experts to just dismiss any correlations and potential causations as mere coincidences when it counters their narrative.
This is the world of Covid we are living in.
Be very careful on who and what you believe on anything to do with correlation, causation and coincidences regarding Covid.
Posted by BeeLine at 11:00 PM