One of the main things I don't understand about Joe Biden and the Democrats is how they always state they are committed to facts and science but their policies and actions invariably fail to back it up.

Joe Biden has spent his first 10 days in office sitting at his desk signing executive orders and actions.

Here is Biden signing a tall stack of executive orders on his first day in office.

I had to laugh considering that one of his orders was a proclamation declaring January 20 a "National Day of Unity". 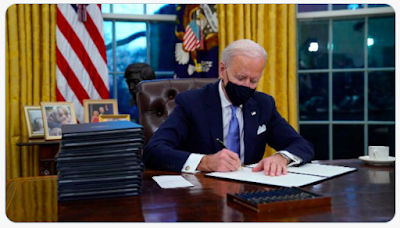 How much unity did you feel with the unilateral action from Biden that any school receiving federal funding must either allow biological males who identify as female to play on girls’ sports teams or be subject to administrative action from the Education Department?

Biden also signed an executive order that you cannot refer to Covid-19 as the "China" virus. I am waiting for the follow up order to tell people to stop talking about the UK, South African and Brazilian variants.

Biden criticized President Trump's use of executive orders during the campaign stating that building consensus on issues of policy was important.

"We're a democracy, you need consensus".

I wonder how much consensus there is among female athletes about Biden's executive order affecting them?

It is true that Biden did state that he would use executive orders to undo Trump policies but hasn't he overdone it a little bit in the first ten days? The fact is that a good many of the executive orders are not undoing anything Trump did. I think the idea that biological males and females should play on separate athletic teams went back a long way before Trump. I think it also has something to do with SCIENCE.

Let's look at a comparison of executive orders in the first 10 days of recent Presidents.

One of the areas that Biden has signed the most executive orders and actions is to attack the fossil fuels industry in the name of fighting "climate change".

Biden has paused oil and gas drilling on federal lands, he has banned fracking and stopped work on the Keystone XL Pipeline.

He has also ordered that all federal agencies buy "carbon pollution-free electricity and clean, zero-emission vehicles". It will be interesting to see if this also applies to the Presidential limousines and all of those large, black Secret Service SUV's.

This is all directed at an overall goal of reaching net zero emissions, economy-wide, by 2050.

I am all for cleaner, more efficient and cost-effective forms of energy. I fully support federal funding of new energy technologies. However, it makes absolutely no sense to ban proven energy sources when the clear facts are that there are no realistic alternatives to replace them at the present time.

What Biden and the Democrats want us to do would be akin to banning horses because their manure was polluting all of the country's roads or restricting the use of firewood to heat people's homes because of the smoke pollution in the late 19th century.

The development of alternative energy sources and technology solved these problems but we did not ban what worked to keep the world going in the meantime.

In order to put all of this in context let's take a look at world energy consumption by source in 2020.

The fact is that fossil fuels dominate. Oil and coal---the two sources that emit the most carbon---make up about 60% of global energy consumption. Natural gas is another 25% of the total.

Renewables and hydro make up only about 10% of energy consumption. Nuclear another 5%.

This chart shows how those shares have changed over the last 25 years.

In that we have only 29 years until 2050 this shows just how dramatic the changes have to be in eliminating oil, gas and coal and replacing it with something else in order to meet that zero carbon emissions future.

I recently came across an excellent analysis on exactly what would have to happen if we are to get to zero global emissions by 2050. If someone wants to talk about science and facts they ought to start with the reality of where we are today and what we would need to build in alternative energy sources to replace all the fossil fuels we currently use.

The analysis frames all of this in what we would need to build in alternative electric generating capacity to our power grid (after all, those electric cars and trucks will need to charged with power from the grid) each day between now and 2050.

We can do that in a couple of ways. We could go all nuclear. In that case, we’d need to build, commission, and bring on-line a brand-new 2.1 GW nuclear power plant every single day from now until 2050. Easy, right? …

Don’t like nukes? Well, we could use wind power. Now, the wind doesn’t blow all the time. Typical wind “capacity factor”, the percentage of actual energy generated compared to the nameplate capacity, is about 35%. So we’d have to build, install, commission and bring online just under 3,000 medium-sized (2 megawatt, MW = 106 watts) wind turbines every single day from now until 2050. No problemo, right? …

Don’t like wind? Well, we could use solar. Per the NREL, actual delivery from grid-scale solar panel installations on a 24/7/365 basis is on the order of 8.3 watts per square metre depending on location. So we’d have to cover ≈ 96 square miles (250 square kilometres) with solar panels, wire them up, test them, and connect them to the grid every single day from now until 2050. Child’s play, right? …

I sincerely hope that everyone can see that any of those alternatives are not just impossible. They are pie-in-the-sky, flying unicorns, bull-goose looney impossible.

The numbers above are based on global energy consumption. The United States consumes about 1/6 of the total so divide the above numbers by 1/6. Another way to look at it is that the United States would have to build this energy capacity each week, instead of each day, between now and 2050.

Do you know how many nuclear power plants have been opened in the United States in the last 25 years?

Two nuclear reactors are now under construction in Georgia. They were approved in 2012 and are scheduled to come on line sometime in 2021 or 2022. These were the first nuclear plants approved in the United States in the last 30 years.

Considering the 10 year lead time from regulatory approval to operation in the United States, I think we are going to be a little behind the schedule outlined above. If we started planning today we would already be 10 years behind on that 29 year schedule.

What about those solar panels?

John Kerry, Biden's Climate Change Czar, recently suggested that all of those high paid workers who were building the Keystone Pipeline could get jobs building solar panels. 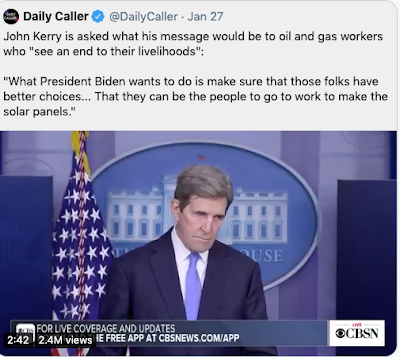 Exactly how large an area would the array of those solar panels require to replace the power in the grid now being supplied by fossil fuels?

If you assume the 96 square mile calculation above on the added solar panel capacity that is needed every week in the United States for the next 29 years to meet the zero emissions goal in 2050, it would require 144,768 square miles of land.

That is 144 times the size of the state of Rhode Island.

It is actually about the size of the total state of Montana.

Are you beginning to see how ridiculous all of this Green New Deal nonsense is?
Despite all of the statements about science and facts, it has absolutely no grounding in reality.
The stated goal of reducing the environmental impacts with these executive orders is also illogical.
The oil and gas in Canada is already being produced. Right now it is being transported by rail cars. Those trains use fossil fuels to power the engines. Those rail cars also sometimes derail. The pipeline would reduce carbon emissions and also better protect the environment.
This is a tweet I sent out in 2013 about a crude oil train derailment in Quebec when the Obama administration was blocking Keystone XL at that time.
13 dead and 37 missing not to mention the environmental impact. 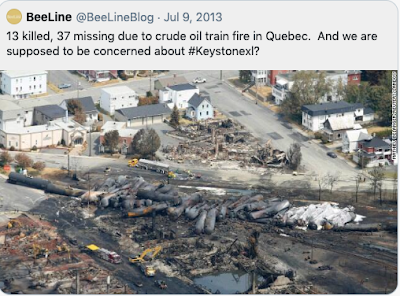 We are also going to ban the fracking of natural gas which will most likely end up requiring the United States to import more crude oil. That means more CO2 to transport the oil which also has more CO2 than the natural gas it will displace.
Does any of this make sense?
Of course it doesn't.
This is nothing but a Democrat dream. It has no basis in reality, facts or science despite what they tell you.
Perhaps we will discover new alternative energy sources or enhancements in the next 29 years that can displace fossil fuels. I hope we can. However, that is nothing more than a dream at this point. There is no realistic path to displace fossil fuels with the technology we have today or that could be considered remotely foreseeable right now.
Therefore, banning, restricting or limiting our primary energy sources is nothing short of committing economic suicide.
At one time I thought that no one would actually follow through on any public policy proposal that was so out of touch with reality. That was a year ago. I no longer assume anything.
What hasn't changed is that dreams always end. At some point, you wake up. Have these facts caused you to wake up?
Let's hope there is something left when a substantial majority in the United States does wake up.
Posted by BeeLine at 10:06 PM