We have reached a point that I never thought I would see in the United States of America.

A nation that was founded on the principles of freedom of speech.

A country that always valued political debate and dissent.

A nation that stood for equal protection under the law.

A country that respected the Constitution.

I think this tweet captures what many are thinking right now.

The outrage over the mayhem at the U.S. Capitol is understandable and appropriate. As I wrote right after the heinous acts, those responsible should be prosecuted to the fullest extent of the law.

That being said, the same should have applied for all the looting, arson and destruction of property (both private and public) that was perpetrated over the summer across the country in the BLM and Antifa riots.

I wrote in my last blog post about the incredible double standard that exists in this country that has become even more apparent in the last week.

People from both sides of the political spectrum have rightfully decried the violence of last week.

Such outrage was not apparent last summer as cities burned and were held hostage by violent mobs. In fact, members of one party hardly spoke out against it all.

Social media companies have completely shutdown any access President Trump has to use their platforms.

His speech at the Texas border today was not carried by any major media outlets.

The same tactic has been used against scores of other conservative voices.

It is astounding how many of those I follow on Twitter have been suspended in the last few days.

Twitter's main competitor, Parler, has been effectively put out of business because Amazon, which was providing their server services, refused to continue serving them.

I hear people say that these are private companies and it is their right to choose who to do business with.

However, these same people did not think that it was the right of a Christian baker to refuse to make a wedding cake for a gay marriage.

It is also not acceptable for a hotel or restaurant to refuse to serve someone because of their skin color, religion or sexual orientation. You wouldn't think that civil rights would have to be defined to include your political opinions. That would seem to be the most basic right of all under our Constitution.

Really? Perhaps that is a possibility for Trump but what about the Mr. and Mrs. Conservative American who want to share their rightful and respectful opinion on an issue of the day?

Telling people to set up or find another platform would be like telling Rosa Parks to form her own bus company.

You can also argue that Twitter and some of these other social media companies are practically arms of the Democrat party.

In 2020, 98.99% of all federal election donations made by Twitter employees went to Democrats!

In effect, Twitter is now effectively an arm of the federal government considering the Democrats will soon control the Presidency, Senate and House. It is not much different with any of the other Big Media or Tech companies. Free speech? We are almost at the point it has ceased to exist.

We are at the point where almost all dissent and debate is being threatened. We are very, very close to becoming a totalitarian state in the manner in which debate and dissent are being viewed. This could not be more dangerous to our republic.

We also have those who are trying to condemn and cancel any member of Congress that supported the effort to further examine and audit the election results in the disputed states before certifying and accepting the electoral votes. This includes Senators Cruz and Hawley.

For example, thousands of Harvard and Yale law school students and alumni signed a petition urging both Senators to be disbarred.

Never mind that both Senators merely were discharging their duties in a manner that was specifically outlined in the U.S. Constitution.

As much as the media narrative tries to obscure the fact, that is the same thing that President Trump was doing up until January 6.

He was doing exactly what he had a right to do under the Constitution considering the facts and circumstances. I also have no doubt that Joe Biden and the Democrats would have done the same if the roles were reversed and three states and 44,000 votes out of 156 million that were cast were all that separated them from The White House.

What is equally incredible is that the people who are doing this censoring (and censuring) claim that they are standing up for the rule of law and our Constitution without the slightest recognition of how they are running roughshod over it.

For example, take a look at this tweet that came out today from Twitter decrying censorship of social media in Uganda's upcoming election.

When I first saw this I think this was a parody post as it was so lacking in self-awareness. 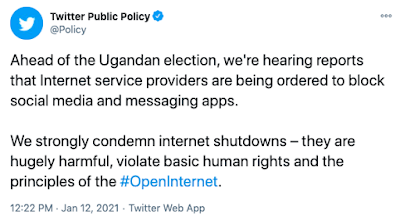 I guess President Trump and conservatives are not human and/or have no rights.

The claim is that President Trump incited the mob to attack the Capitol. This is patently false as I explained in my last blog post. You can read the transcript yourself.

However, the timeline that is now coming to light shows that the assault on the Capitol began midway through Trump's speech and people has already had breached the Capitol over an hour before anyone who had attended Trump's entire speech could have arrived.

In fact, the narrative that has been used here bears some eerie similarities to the explanations that were heard right after the storming of our consulate in Benghazi.

Remember how the original narrative was that the attack was a spontaneous uprising caused by a video that was critical of Islam. We later found out it was a pre-meditated and planned attack in retribution for 9/11.

More and more evidence is showing that the events at the Capitol were pre-meditated and planned and had nothing to do with reaction to Trump's speech. We found out today that the FBI actually had intelligence that an attack was planned. Why then was security not increased? Why was the National Guard not on call? Was the President alerted to the intelligence? If he was not, why not? If he was and did not make adjustments in his rally plans, he rightfully should bear more responsibility. 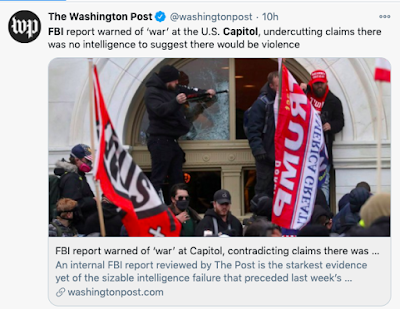 The House of Representatives seems intent on passing an Article of Impeachment against President Trump seven days before his term ends for "provoking a terrorist act" against the United States of America and being an "ongoing risk" to the nation.

Under Senate rules and procedures it is doubtful that the Senate could even begin a trial before President Trump leaves office let alone reach a verdict. There is also a substantial constitutional question whether you can even have an impeachment trial after a President leaves office.

It would be hard to create this as a storyline in a novel and have any editor not redline it as too ridiculous to even contemplate.

The country faces a multitude of challenges right now, the Senate has the job of confirming all of the new administration's executive appointments and this is the highest priority right now?

For context, here is another interesting tweet from the Twitter time machine that seems to have been forgotten by Nancy Pelosi.

Pelosi and the Democrats were also responsible for blocking a Congressional resolution that would have condemned mob violence. 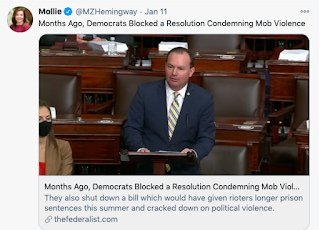 How about dusting this off and passing that now?

In the meantime, we are about to swear in a Vice President in Kamala Harris who last summer, as cities were being looted and burned, said "protestors should not let up" and tweeted support for a bail fund for looters, arsonists and others who had been arrested in the Minneapolis riots in May. 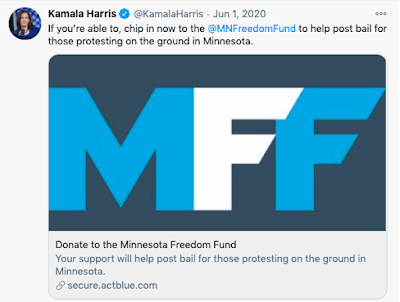 Bear in mind, this was BEFORE she was selected by the Democrats to be their VP candidate.

Those who are targeted in all of this are not just President Trump and his political supporters in Congress.

The Democrats and media seem to want to come after anyone who supported President Trump---74 million strong.

If he is the leader of that organization what does she think of his supporters?

I wonder if she has bothered to compare and contrast the terrorism in evidence at Trump rallies over the last four years to what accompanied those BLM/Antifa protests?

We also have a lawyer at PBS (whose salary was paid by your tax dollars) stating that Republican voters should have their children put in re-education camps. (Thankfully, PBS accepted his resignation after that comment became public).

Finally, we have a long list of media figures such as Don Lemon, and Bill Maher who believe that Trump supporters need to be deprogrammed as they represent a cult.

Then again, it might be 2017 if you ask a number of teachers unions and the Democratic Socialists of America.

They held a National Day of Resistance today.

Resistance to what? I thought their guy won.

The fact is that no one is going to win if this is the country we are living in right now.

We are supposed to believe that it is going to get better if it is like this now?

Wake me up when this nightmare is over.