If anything has been proven over the last four years it is the extent to which a massive double standard exists in this country.

There is one standard applied by the media and the establishment for some people, groups and ideas. There is another standard for others.

We hear a lot about equal justice, social justice or justice under the law.

There is little doubt that some people and groups in this country did not get equal justice in the past. There undoubtedly are remaining injustices for some based on race, religion, gender or origin.

However, the fact that injustice exists in one area is not an excuse to apply it in another.

If there is anything that has fed anger among many Americans, and resentment of the media and the establishment over the last four years, it is the manner in which a double standard has been applied to President Trump and his supporters.

There is no excuse for the invasion of the Capitol last week by some of the supporters who attended the Trump rally. The media and others (including me) who have condemned these heinous acts are right on point.

What is also true is that there was no excuse for the months of upheaval and violence we saw for during this past summer in many American cities. However, that mayhem was largely excused by the media and Democrat politicians alike.

This graphic captures the double standard quite nicely.

We have seen the media and the establishment quickly condemn President Trump for "inciting" the violence and attempting to encourage "insurrection" among those at the rally.

How many have looked at Trump's exact comments in his speech?

I saw part of the speech live and read the full transcript of his remarks. You can do the same here.

This is the most direct comment he made about Congress and marching to the Capitol in the 73 minute speech. It is at 18;16 in the speech.

We have come to demand that Congress do the right thing and only count the electors who have been lawfully slated, lawfully slated. I know that everyone here will soon be marching over to the Capitol building to peacefully and patriotically make your voices heard. Today we will see whether Republicans stand strong for integrity of our elections, but whether or not they stand strong for our country, our country. Our country has been under siege for a long time, far longer than this four-year period. (emphasis added).

From that point to the end of the speech most of what Trump spoke about was a recitation of what he believed to be were voting irregularities that should have resulted in more scrutiny of the election results and what he believed were grounds for Congress refuse to certify the electoral college votes.

Trump ended with another reference to walking to the Capitol down Pennsylvania Avenue in the last two paragraphs of the speech.

My main criticism of Trump here is that when he used the word "we" he should have gone to the Capitol as well. If he had, he would have had the opportunity to control the situation from getting out of hand.

He actually could have had the opportunity for a strong leadership moment on the scene by stating "We don't do more than raise our voices in protest. We don't do what was done by many others last summer. We respect property. We respect our government. We respect law enforcement. Use your First Amendment right to peaceably assemble but stand down and stand back from anything more."

Trump would be in an entirely different place right now if he had done this.

Let's put that aside and compare Trump's alleged incendiary rhetoric with the comments of a number of Democrats over the last few years. 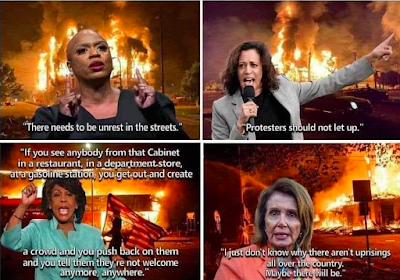 I also found it interesting how the media quickly tried to characterize what went on at the Capitol as an attempted "coup".

If it was it must be the first attempted coup in the history of the world that saw the financial markets of the country involved react like this.

Stock market up since Tuesday.

The dollar up since Tuesday.

Compare this "coup" with what appears to have occurred when President Trump took office when it appears that people associated with his campaign were illegally surveilled with FISA warrants.

We still don't know the full extent of this alleged "coup" because the Durham investigation of the origins, predicate and individuals involved in these apparent abuses has been ongoing for over two years.

Or how about these examples where protestors stormed or occupied Capitol Hill property? I am not suggesting these are equivalents but they seem to have conveniently been lost from memory right now.

Some 600 protestors were arrested during a clangorous occupation of a U.S. Senate office building in Washington on Thursday, where they decried U.S. President Donald Trump’s “zero- tolerance” stance on illegal immigration.

We now have the Democrats stating that they want to Mike Pence to invoke the 25th Amendment against Trump to remove him from power or they will bring impeachment charges against President Trump with less than ten days left in his term?

What exactly is the point of this when there are so many other pressing issues facing the country?

Nancy Pelosi states that President Trump is an imminent threat to "our Democracy".

What is the real reason?

Apparently an impeachment would be done solely to prevent Trump from ever again being able to hold federal office if he were convicted.

However, if Trump is as bad and misguided as we are told he is why would the Democrats have to worry about President Trump ever being elected to anything again?

After all, if you look at the media now you would think that Trump is thoroughly discredited and does not have a supporter left in the world. At least, that is the narrative.

Perhaps Democrats have seen the most recent Trump approval rating performed by Rasmussen.

It has Trump at 48% approval after the events of this week that includes all of the bans on Trump's social media accounts.

Is this just a coincidence?

All of this censorship seems to have been done to totally discredit Trump and to marginalize and demoralize anyone who might still approve of Trump.

If that is the case, the Rasmussen poll indicates that it might not be working very well.

48% is actually the highest approval rating Trump has had in this poll since December 18.

Interestingly, Rasmussen had Trump at a 52% approval rating on election day when he lost the election.

What I found more interesting is that Newsmax is reporting that Trump polled at 51% approval in the last night of polling on Thursday night in the rolling survey.

If there is one thing I know about the American people is that most have a keen appreciation of what is fair and what is unfair.

Most also appreciate and support the rule of law.

They also can see a double standard when it exists.

If this is a way to bring the country together it seems to be a poor strategy.

Where is Mr. Unity, Joe Biden, in all of this?