Are You Going To Get The Vaccine?

Are you going to get the vaccine?

That is a question I hear often these days.

Two vaccines have been authorized in the United States to this point---one developed by Pfizer and another by Moderna.

Over 10.5 million people have received at least one dose of the vaccine thus far out of over 30 million doses that have been purchased by the federal government and distributed to the states.

It is believed that two doses of the vaccine are necessary spaced out about 3-4 weeks apart to be effective.

More doses of the Pfizer vaccine have been administered to date than the Moderna vaccine. 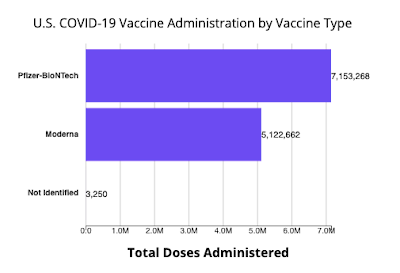 What I have found interesting in talking about the vaccines with people is how little most know about what they may have injected into their body.

Most people believe that these vaccines have been APPROVED by the FDA. This is not correct. They have merely been AUTHORIZED under an emergency use authorization.

Most people are also not aware that these vaccines have also been developed using biotechnology that has never been successfully used with humans before. The Pfizer and Moderna vaccines use messenger RNA (mRNA) which is designed to create a spike protein in your body that is unique to Covid-19 that attaches to cells near the vaccination site. Once that spike protein is recognized by your body it is designed to begin producing antibodies and T-cells to fight off what it thinks is an infection.

If the mRNA process works as advertised it will be be a tremendous medical advance as it will facilitate much quicker development of vaccines in the future. Vaccines can be developed using DNA templates rather than relying on the traditional method of using weakened or inactivated versions of the disease-causing pathogen to activate the body's immune response.

However, some are concerned that it could potentially cause a problem named "Antibody Dependent Enhancement" in which the vaccine actually results in a worse situation for the person who received it if exposed to a future virus in the coronavirus family. This is a major reason that previous efforts to develop a vaccine involving other coronaviruses were not successful.

This usually did not allow the vaccines to get past animal trials. It should be noted that few animal trials were conducted with the Covid vaccine trials due to the compressed testing schedule.

Due to the "warp speed" development process there were also limits in the population of those tested.

No one under the age of 18 was tested. Nor were pregnant women. Few were tested who were over age 75. No one was tested with two or more comorbidities. It was considered too risky and unethical to test the vaccines on these vulnerable groups.

You can assume that almost no one in a nursing home was tested but that group has proven to be the demographic most vulnerable to the virus.

Thus far, more than 10% of the total doses administered in the USA have been to those in long-term care facilities.

However, Norway has already sounded an alarm about what they have seen in vaccines given to those over age 75.

Norway is reporting that they have recorded 29 deaths from the Pfizer vaccine in those over age 75 shortly after receiving the shot.

Norway's public health authority has suggested that the vaccine might be too risky for the elderly.

There was also a recent report that an upstate New York nursing home has seen 32 deaths since Covid vaccinations began there on December 22. Authorities state there is no connection since they had seen positive Covid tests in the home beginning December 16.

However, it seems that someone should be studying this closer.

At a minimum, it suggests a double standard in that Covid seems to be suspected in any nursing home death but there is a quick rejection of any possible connection between the vaccine and any deaths that occur soon after the vaccination.

The biggest misconception I see in people regarding the vaccine is that they believe it will prevent them from being infected with Covid or if loved ones are vaccinated it will prevent the transmission of the virus to them. This would seem to be an obvious assumption and a primary reason to get the vaccine.

Incredibly, there is no evidence that any of the Covid vaccines will prevent transmission of the virus.

As I wrote when these vaccines were under development, that was never a stated objective or goal of the vaccines. They merely were intended to minimize the symptoms if you get the infection. 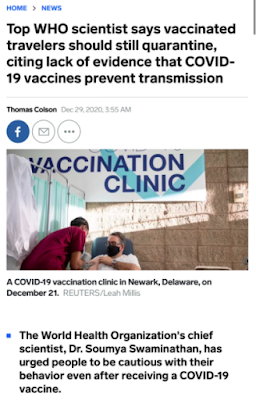 Many tell me that they want to get the vaccines so they can travel.

However, right now the U.S. rules for anyone boarding an international flight to the United States is that they test negative for the virus or have documentary evidence that they have had Covid-19 and recovered with the antibodies. Evidence that you have had the vaccine will not allow passengers to avoid these other requirements.

This is the relevant excerpt from the CDC directive issued January 12, 2021.

This is pretty clear evidence that the CDC itself does not believe that the vaccine is trusted to prevent infection and transmission of the virus right now.

Hopefully this will change over time but right now there is no evidence that getting the vaccine will prevent you from getting the virus or transmitting it. Almost everyone I have talked to about this has been surprised to find this out.

I suggest you look closely at the actions of Joe Biden, Kamala Harris and Dr. Tony Fauci in the coming weeks. They have all had both doses of the vaccines. There should be no reason that any of them should wear a mask. If the vaccine had the effectiveness people are being led to believe it has, they should not be able to be infected by or transmit the virus. Therefore, there should be no reason to wear a mask. See what they do. Ask yourself what is the purpose of the vaccine if they are still saying masks are required for those who have been vaccinated?

There is also some interesting data out of Israel on the vaccine front.

Israel leads the world right now in vaccinating its citizens.

It has already administered the vaccine to almost 25% of its population since they started their vaccination program in mid-December.

There is no other country in the world comes close to that effort.

Israel leads the world in COVID-19 vaccinations. It has already vaccinated nearly a quarter of its population, including 75 percent of the population most at risk, people over age 60. It has administered 24.5 doses per 100 persons, nearly double the next-best country (the United Arab Emirates) and about 8 times as many people per capita as in the U.S. and the U.K. Israel’s per capita vaccination rate is 24 times that of the normally efficient Germans and 50 times better than the world average. Only three other countries in the world — the U.S., China, and the U.K. — have administered more vaccines.

However, confirmed cases in Israel starting to explode upwards at about the same time the vaccination program began. 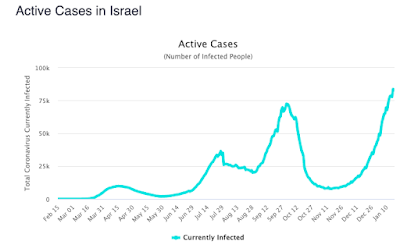 Israel now has 83,104. That is a 5-fold increase in one month at the same time they have vaccinated almost 25% of the population.

This could be just an odd coincidence.

There could be a lag effect before cases sharply move down.

However, it is sure not what you would expect with a vaccination effort than has shown such significant penetration of the population in a short period of time.

I think many are also under the illusion that the Covid vaccine is in many respects similar to getting a flu shot.

Alex Berenson, the former New York Times reporter who has been at the forefront of Covid coverage, recently examined the CDC data reported thus far on its Vaccine Adverse Event Reporting Systems (VAERS) on the Covid vaccines. There is a lag in this data so this is only based on 6.6 million doses administered. However, it shows that this is not the flu shot when it comes to adverse events.

Deaths per dose at 85x that of the flu shot. 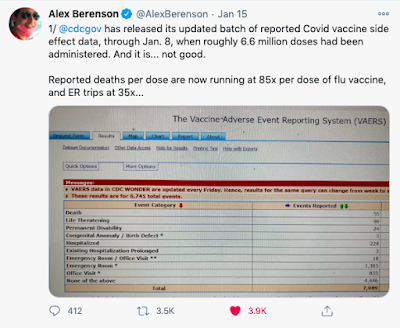 It is my fervent hope that the vaccines are effective and they prove to be safe.

However, there is no clear consensus even among health professionals on the front lines whether the benefits outweigh the risks involving these vaccines.

I have seen a lot of numbers suggesting that 40%-60% of health care workers are declining the vaccine.

The fact that so many health care workers have declined the vaccines is a reason that there are over 30 million doses that have been made available to the states but only 13 million have been used thus far.

For myself, I am taking a wait and see attitude on whether I am going to get the vaccine.

I think a lot of questions will be answered about the true efficacy of the vaccines as well as their safety over the next 6-12 months.

Right now I would also feel more comfortable waiting for the vaccines that have been developed using the more traditional development methods and avoiding the mRNA vaccines.

The only thing I know for sure is that the media and the "experts" have painted the most negative and dangerous narrative they could involving Covid-19. They are also portraying the vaccines in the most positive light they can.

Neither narrative should be trusted. The risks of Covid to most people is a much smaller than most are led to believe. At the same time, the benefits of the vaccine are much less and there also can be real risks attached to these vaccines that should not be overlooked.

The truth undoubtedly lies somewhere in the middle but it is next to impossible for the average person to decipher what it is.

My advice to anybody is to do as much research as you can. Don't take anything you are told at face value. Make sure you understand the risks and benefits of the vaccines.

If you do that you will be in a much better position to make an informed decision on whether you should get the vaccine.