Covid-19 is a highly infectious virus that is not to be taken lightly.

Almost 2 million deaths have been attributed to Covid-19 worldwide over the last year.

However, compared to many past pandemics the death rate is relatively low. This is especially true when you adjust the death toll for the smaller world population in years past.

When we look back in history what is going to be most remarkable about the Covid-19 pandemic will be all the self-inflicted damage we have done to the human race in our reaction to the virus. This damage will be many, many times greater than the virus causes itself.

Consider the Covid relief package that Joe Biden is sending to Congress.

It calls for $1.9 trillion in additional federal spending.

This is on top of $4.4 trillion in Covid relief and stimulus spending that was already enacted during 2020.

This tweet lists some of the highlights of the Biden bill which includes another $1,400 in individual stimulus payments, an extra $400 per week in unemployment benefits and a proposed $15 national minimum wage. 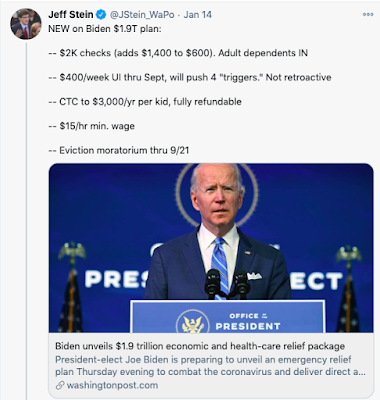 In reaction to this news I came across this tweet from a liberal know-nothing from Seattle (with 288,000 followers--which is scary in itself) proclaiming how great all of this is and comparing it to what he thinks were the "horrible" Trump tax cuts.

The only problem is liberal Dan is spreading the types of disinformation and lies that Twitter is supposed to be guarding against.

He fails to mention that that $1.9 trillion cost for the Trump tax cuts was a 10-year cost.

Biden is proposing to spend this Covid relief money in a few months.

The $1.9 trillion Trump tax cuts also included all of the middle income tax cuts that included tax rate reductions for all tax brackets. It also resulted in the elimination of a number of itemized tax deductions and personal exemptions. The loss of itemized deductions were specifically targeted against high income earners who lost deductions for state and local taxes.

In fact, of that $1.9 trillion in net budget costs the amounts below went specifically to middle and lower income taxpayers beyond the rate reductions.

I wrote a blog post right after the 2018 tax filing season was over and cited a report by HR Block that the average tax liability for its 20 million clients (almost all of which are lower and middle income) had seen an average overall tax liability that was down 24.9% compared to before the Trump tax cuts.

It is hardly accurate to state that Trump tax cuts were solely for the rich and corporations is it?

Where are those Twitter censors when it comes to liberal misinformation?

If the Biden Covid relief package is enacted we will have spent $6.3 trillion in one year reacting to the virus.

Let's put that amount in perspective.

In the year before Covid-19 hit, we only collected $3.5 trillion in total federal revenues.

We are close to spending 10 times that amount on Covid relief in just one year!

This graph give a sense of where we are before we do any more damage with that $1.9 trillion. 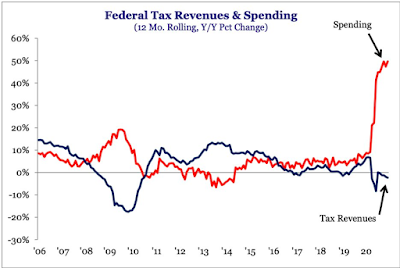 There is no society in the history of mankind that would have ever contemplated this amount of craziness.

Locking down people and businesses.

Closing schools for close to a year.

Taking on massive amounts of debt to fund the craziness.

If you want to visualize crazy here is a picture of what is called a "virtual learning center" for the Metro Nashville Public Schools.

The schools are not open but children can still attend these virtual centers as their parents need to work and they have no one to supervise their virtual learning. 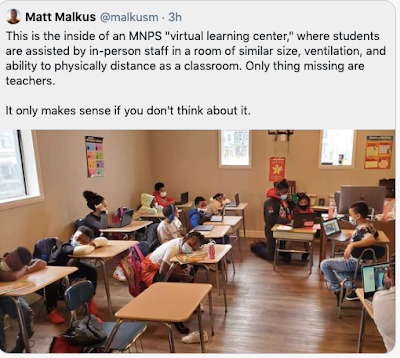 Note the three children who are sleeping at their desks.

Who is being hurt the hardest? Many small business owners the majority of which vote Republican. Is that just a coincidence?

What are we doing to an entire generation of young people?

Why have we done it?

A big reason this has even been possible is that technology never made it feasible to consider anything like this before.

There was no choice. People did what they had to do because they knew they would not survive if they did not. They had to persevere as a society or perish.

Where is all the money coming from that we are throwing around? We just issue more debt and have the Federal Reserve buy it with the money they create out of thin air. 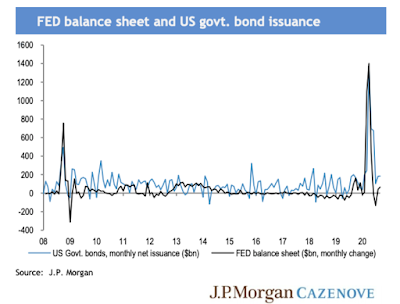 We have come to think that we can survive by hunkering down, printing money and throwing it around to give people some hope. There seems to be no consideration of the long term costs of what we are doing. It is crazy.

We also now find almost a year into the lockdowns there is no evidence they have done anything to control the spread of the virus in a new analysis by the American Institute for Economic Research.

The use of universal lockdowns in the event of the appearance of a new pathogen has no precedent. It has been a science experiment in real time, with most of the human population used as lab rats. The costs are legion.

The question is whether lockdowns worked to control the virus in a way that is scientifically verifiable. Based on the following studies, the answer is no and for a variety of reasons: bad data, no correlations, no causal demonstration, anomalous exceptions, and so on. There is no relationship between lockdowns (or whatever else people want to call them to mask their true nature) and virus control.

The World Health Organization is also now admitting that the high cycle threshold PCR tests for Covid are much too sensitive and have resulted in millions of false positive tests. This is something I have been writing about for months. This means millions have been quarantined needlessly as well as anyone they had contact with. These people either did not have Covid or the viral load they had was not infectious at all. The economic impact has been staggering.

On top of this Biden and the Democrats want to mandate a $15 per hour wage as well?

However, Donald Trump's economic policies lifted 6 million people out of poverty between 2017 and 2019 (2020 data is not yet available)  of which over 2 million were children under the age of 18.

Those policies also resulted in the lowest poverty rates in history for African Americans and Hispanic Americans as well as the lowest unemployment rate for these Americans.

This wasn't done with government mandates. In fact, it was accomplished by government being less intrusive with lower tax rates and fewer job-killing regulations.

Which brings us to more craziness.

One of Biden's first actions was to impose a mandate that a mask must be worn while on any federal property.

Does that mean that he has to wear a mask in his bedroom at the White House? Isn't that federal property?

What about those who want to hike at Yosemite or Yellowstone? That is federal property.

What about the Marines at basic training at Parris Island on a 3 mile run? That is federal property.

Of course, here is Joe Biden and his family in the Lincoln Memorial shortly after he signed that federal mask order.

Perhaps he forgot what he signed a few hours earlier. 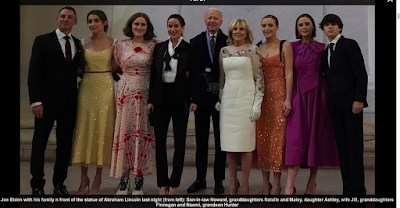 I don't begrudge the family photo without the masks. Who would want that on such a big day?

However, who signed the order? I thought he was the guy who said it is all about leadership?

There is surely more on the way. And Covid will only be a small part of it.