It was exactly one year ago that I first wrote about the coronavirus outbreak in Wuhan, China.

Since that first blog post I have written about Covid another 74 times. That represents almost 50% of all of the blog posts I wrote in the last year.

I am reposting that first blog post from last year below to provide some perspective on my early take about the virus. What it shows is that in some ways we have come a long way in the last year. In other ways we are just as confused about it as we were a year ago.

Early on I showed concern about potential asymptomatic spread and what was said to be a long incubation period that could be as long as 14 days.

There is still not clear consensus that asymptomatic spread is a significant driver in the spread of the virus. A 14 day incubation period seems to be an extreme outlier. Most of the time symptoms will present within no more than 5 days after exposure with 2-3 days being most common.

I wrote a year ago that I suspected the virus might have escaped from the Wuhan biolab that was doing 'gain of function' research on viruses. At that time, China was blaming the virus on people eating bats at a wet market in Wuhan.

A WHO official said yesterday they still could not say the virus originated in China. 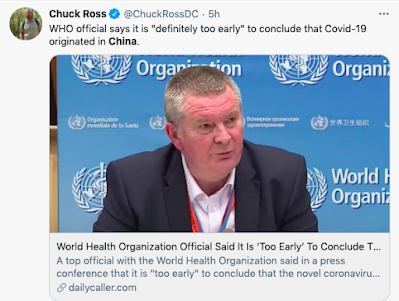 A year has passed and we still don't know where the virus originated? That seems to be very hard to believe.

We also still don't know the extent to which Dr. Tony Fauci and his NIH group might have actually been partially funding the "gain of function" research at Wuhan. My guess is that he was.

Fauci was also a name that most had never heard of a year ago.

Now almost everyone knows his name. Until yesterday few would have ever thought that Fauci was also the highest paid federal government employee in 2019.

He actually made more last year than the President of the United States. However, Donald Trump donated his entire salary to charity. To this day we don't know if Fauci may also be profiting from patents on the Covid vaccines. 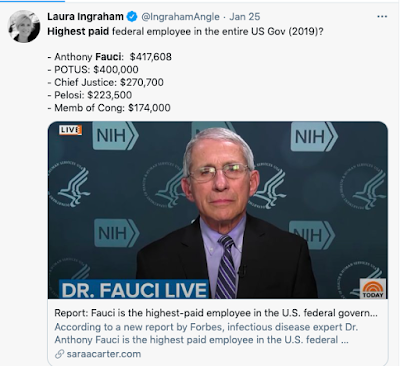 Fauci is also the "expert" who told us 11 months ago that the risk of coronavirus in the USA was "minuscule" and there was no value in wearing face masks.

Fauci is now saying it "makes common sense" that we wear two masks.

Do you think Dr. Fauci might be slightly overpaid?

Speaking of the vaccines, I doubt that any expert a year ago could have conceived that we would have two Covid vaccines being administered right now. It has been an extraordinary achievement.

I also doubt that anyone could have predicted that China, which was being devastated by the virus in Wuhan a year ago, would be the country that would weather the pandemic and its economic ramifications better than any other country.

Was this great crisis management? Did we ever get the real story from China? Is there something more nefarious at play here? A year later and we don't know.

I also wrote a year ago that should the virus spread widely beyond China that the two countries that public health experts believed were best prepared to deal with a pandemic were the United States and the United Kingdom. China was ranked #51.

A year later it is the USA and UK that have fared worse than almost all other major countries. 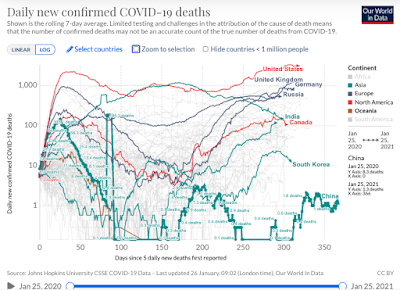 Did the world public health experts know what they were talking about when they made that original assessment?

Did the public health experts in the USA or UK make major mistakes in responding to the pandemic?

Or is it just a function that the USA and UK have counted cases and deaths much more thoroughly and liberally than other countries? Perhaps they have inflated case and death counts because they have more resources and tools that other countries do not. Might they have been too smart for their (and our) own good?

There is a lot we still don't know a year later.

I wish I was confident we will know more a year from now.

In the meantime, take a few minutes and read what I wrote about coronavirus a year ago.

There is good and bad news about the coronavirus epidemic in China.
The bad news is that this appears to be a particularly virulent virus strain. It is also centered in Wuhan, China which is the home to 11 million people. We are talking about a city that is larger than any in the United States but chances are that 99% of Americans did not even know it existed until last week.

The virus also apparently has a long incubation period (14+ days) before any symptoms manifest themselves. In the meantime, the subject is contagious even if they do not know they are sick. In that 11 million people live in Wuhan it only takes a small percentage of those people to travel elsewhere for the virus to spread.

We are already seeing that effect as we see the confirmed cases spread out from Hubei province in China where Wuhan is located.

* Thailand and Hong Kong have each reported eight cases of infection; the United States and Macau have five each; Taiwan, Australia, Singapore and Malaysia each have reported four; France and Japan three each; Vietnam and South Korea two apiece, and one each in Canada and Nepal.

* No fatalities have been reported outside China.

The five suspected cases in the United States are in California (3), Washington state and Chicago,

The most effective way to stop an outbreak of a virus such as this one is to aggressively isolate and quarantine those that are ill so as to not infect other people. They need to be identified, treated aggressively by medical professionals, and isolated.

It always seems that new virus strains originate in China. Each year's flu strains are expected to start there.

A lot of that seems to be due to the massive number of people in China and the fact that there is often more daily exposure to animals in China compared to Western countries. Many of these viruses originate in animals and mutate to humans. That is why we have heard of the swine flu, bird flu and the like in the past.

Ground zero for the coronavirus is reportedly a seafood market in central Wushan in which unauthorized animals were also sold. There have been some reports that the virus has been traced to bats that were eaten with soup in that market. 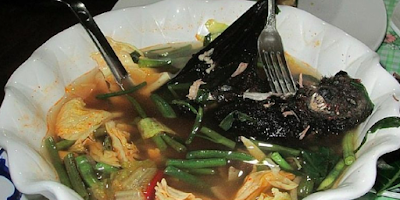 I can't believe that I missed eating that when I was in China a year ago!

More troubling are reports that this virus may have escaped from a Chinese biolab that is located in Wuhan and was involved in studying the highest risk pathogens in the world.

U.S. scientists were worried about the risks that pathogens like this could escape from facilities like this one as evidenced by this article in The Scientist back in 2015.

As a result, the United States ceased funding any of this "gain-of-function" research back in 2013 because it determined the risk of creating a pandemic was much greater than any information gained from the research.

It is worthwhile to note that at that time this decision was made there was research being done in the U.S. on an engineered coronavirus. Note as well where the surface protein came from for that virus.

Ralph Baric, an infectious-disease researcher at the University of North Carolina at Chapel Hill, last week (November 9) published a study on his team’s efforts to engineer a virus with the surface protein of the SHC014 coronavirus, found in horseshoe bats in China, and the backbone of to one that causes human-like severe acute respiratory syndrome (SARS) in mice. The hybrid virus could infect human airway cells and caused disease in mice, according to the team’s results, which were published in Nature Medicine.

One more piece of bad news is that fact that the Chinese Communists are not known to be the most transparent government on the planet. If they are admitting to 2,700 cases how many are we not being informed about?

What is the good news?

China has already banned all travel in and out of Wuhan. The city has become a ghost town. They have established quarantines in a dozen other cities cities as well such that some 50 million people are locked down.

China also has announced that they are going to build two hospitals each with over 1,000 beds in Wuhan.

What is in incredible is the Chinese say that these hospitals will be able to accept patients in a couple of weeks!

Here is a photo of the site work on the first hospital taken on January 24..

China's Wuhan city, the centre of the outbreak of the new coronavirus, will build a second dedicated hospital to treat patients.

Construction has already started on the first facility, with enough space for 1,000 patients, which is expected to be completed by 3 February.

The second, which is designed to have 1,300 beds, is due to be finished within three weeks.

This may seem like an unrealistic time frame, however, China has a history of quickly building hospitals at times of crisis.

During the SARS outbreak in 2003, 7,000 people worked day and night in Beijing, taking just seven days to build the Xiaotangshan facility.

The Chinese are known for being able to construct buildings and bridges very quickly.

Graham Allison in his book, “Destined for War: Can America and China Escape Thucydides’s Trap?" has some incredible examples of Chinese construction capabilities.

Allison also observed that it took nearly four years for a bridge near his office at Harvard University that crossed the Charles River to be replaced. The Chinese took only 43 hours to replace a substantially larger 1,300 ton bridge in China in November, 2015.

It just goes to show you have much you can accomplish when the government controls the entire labor supply and you don't need to worry about governmental regulations and permits and dealing with agencies like the EPA, OSHA, HHS and CMS to approve your projects.

Let's hope that China can control the spread of the virus. It is a significant challenge considering the population density in that country and the fact that this outbreak began over the Lunar New Year holiday when many people are traveling.

If you live in the United States some additional good news is that the 2019 Global Health Security Index ranks it as the best prepared in the world to deal with a pandemic although it found that the no country was fully prepared. These are the ten countries that are most prepared. China ranks 51st out of 195 countries in the index.

If you want to be best prepared personally I thought this was a good article from a reporter who covered the SARS epidemic in China in 2003. It is has some good tips and precautions that you can use to protect yourself. These make good sense even if we are only talking about avoiding seasonal flu or colds.

Let's hope and pray that China and other countries around the world can keep the virus in check.

In the meantime, stay safe and be healthy.