A false representation of a matter of fact—whether by words or by conduct, by false or misleading allegations, or by concealment of what should have been disclosed—that deceives and is intended to deceive another so that the individual will act upon it to her or his legal injury.
Allegations of election fraud has gotten a lot of attention in the 2020 election.
However, the most obvious fraud in most elections involves candidates who say one thing on the campaign trail and do something completely different when elected.
They make false or misleading claims to deceive the voters in order to get elected. Once elected, their true position becomes known.
Whatever your views are on Donald Trump, there was no politician in my lifetime who governed consistently in the same manner in office as he did while campaigning. He did not say one thing during the campaign and do something differently in office. There were no games. There was no obfuscation. He did what he said he was going to do.
It was a big reason why the Washington establishment never liked Trump. He didn't play the game the way it was supposed to be played. It is the real reason why they impeached in the last days of his term and want to bar him from ever running for federal office again.
Charles Hurt explains it well in a recent opinion piece. "Trump Feared Now More Than Ever" by pointing out that Trump was the only honest and serious person in Washington.

In one final shock to all the people who never understood Mr. Trump (or the 75 million Americans who supported him), he declined to attend his successor’s inauguration. Cue the fits of sputtering rage.
Truly, Mr. Trump is the only honest one of the whole bunch — the only one who is not kidding; the only serious person in Washington.
He didn’t attend Wednesday’s festivities because it would have been a lie — much like everything in Washington.

It was the same shocking outrage Mr. Trump sparked four years ago when he delivered his inaugural address and told the assembled crowd that — yes, indeed — he meant every word of his campaign and intended to make good on every promise he had made.
Washington.
Melted.
Down.
And from that moment on, they never recovered from their visceral hatred of Donald J. Trump.

We are back to standard practice with Joe Biden and Kamala Harris.

The people who vote are viewed as nothing but props in a play or chumps in a fixed game.

We are already seeing it all revealed in the first few days after January 20.

Joe Biden spent most of the campaign criticizing Donald Trump's Covid policy and telling people he had a plan that would end the crisis.

In fact, we heard this claim more than any other during the campaign.

Joe Biden had a plan and he was going to fix everything.

What do we hear from Biden on his second full day in office? 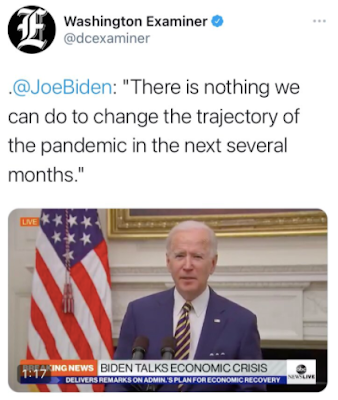 Since the Covid vaccines first began being distributed in mid-December Biden has also been stating that he was going to be introducing an ambitious plan to do 100 million vaccinations in 100 days. Biden intimated that Trump did not have any plan in place to do that.

Does anyone remember Joe Biden on the campaign trail when he criticized President Trump for stopping flights from China and Europe into the United States to stop the spread of Covid?

Biden said travel bans were useless. He would have a plan to combat it that didn't rely on racist, xenophobic policies. 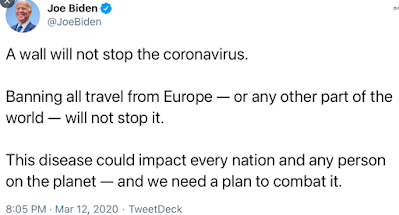 Perhaps Biden decided they do work considering the fencing that was put up in Washington for his inauguration. 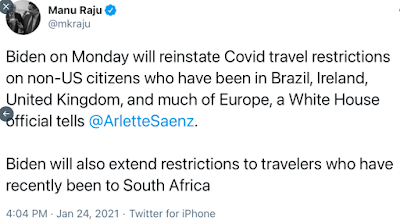 Why didn't Trump come up with that plan?

You see all of this and you marvel at how Biden can say all of this with a straight face. However, then you realize, he has been a politician all his life and it just comes naturally.

Biden is also attempting to create a narrative right now that the economic crisis is deepening and it's not getting better. 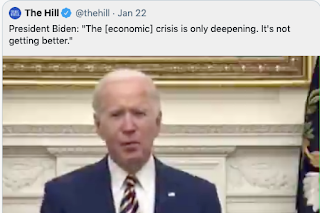 That's interesting because the unemployment rate is currently less than half of what it was in April.

It would be better still but for the economic lockdowns that have been instituted in Democrat states like California and New York.

The United States economic performance has also been better than any other major country in the world except China. Funny how that has worked out.

Despite Covid, it should also be noted that the unemployment rate when President Trump left office is still lower than it was for any of the first five years of the Obama and Biden administration.

More concealment and deception?
Of course, we also have the massive misrepresentation that Biden and Harris made during the campaign about their intentions about fracking and oil and gas drilling.
Remember when Biden and the media stated that Trump was lying when he said Biden wanted to abolish the U.S. oil industry and eliminate fracking. 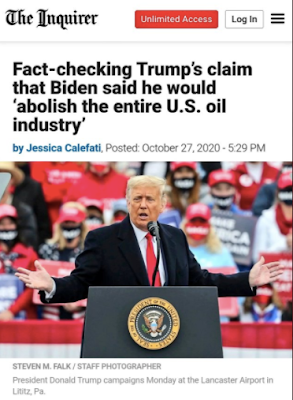 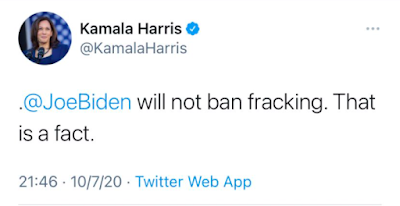 It was a FACT that Joe Biden had no intention of banning fracking. His own VP said so.
It didn't take long to see where this is going.
Who was telling the truth? 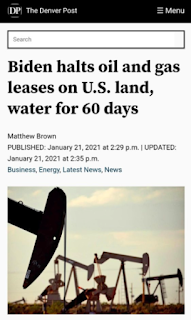 I would say all of this is a pretty convincing proof of election fraud.
You also had Joe Biden telling labor unions that he was in their corner during the campaign only to kill the Keystone XL pipeline project and thousands of high paying labor jobs even before his first day in office.
Biden told us he was going to be the most "pro-union" President in history.
Here are a couple of big unions endorsing Biden during the campaign. 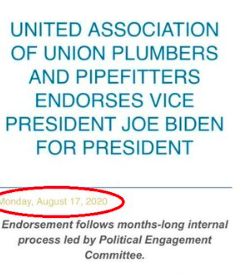 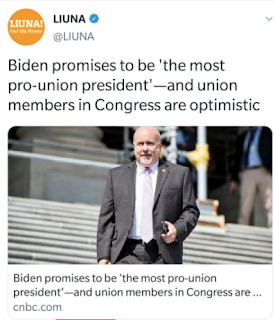 It seem these unions realized they were a victim of election fraud even before the inauguration. 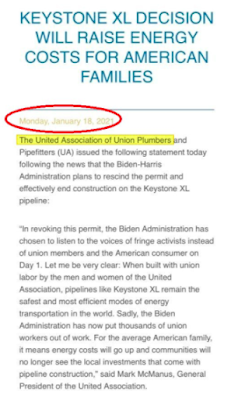 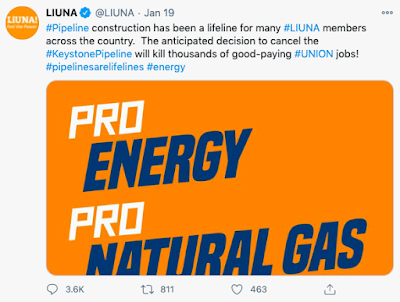 The most "pro-union" President?
Perhaps that only applies for the teachers' unions.
There was no fraud in the 2020 election?
What more proof does one need?
It doesn't even require anyone to even look at one voting machine or suspicious mail-in ballot.
Posted by BeeLine at 9:28 PM