The case of nurse Kaci Hickox and her enforced quarantine in Newark, New Jersey pushed me to do a little research on the background and basis for a quarantine order.

It also seems useful to compare and contrast the difference between quarantining someone and isolating someone.

This is exactly how the Center for Disease Control (CDC) defines the two terms.

Isolation and quarantine help protect the public by preventing exposure to people who have or may have a contagious disease.

In addition to serving as medical functions, isolation and quarantine also are “police power” functions, derived from the right of the state to take action affecting individuals for the benefit of society.


Ms. Hickox created a lot of noise in the news about having been quarantined in New Jersey upon her arrival from Sierra Leone after treating Ebola patients in that country for a month with Doctors Without Borders.

This is what she said in an interview with Candy Crowley on CNN.

"To quarantine everyone, in case, you know, when you cannot predict who may develop Ebola or not, and to make me stay for 21 days, to not be with my family, to put me through this emotional and physical stress, is completely unacceptable," Hickox told Crowley. She added, "I feel like my basic human rights have been violated. It's really inhumane".


Hickox was ultimately released by New Jersey and sent to her home state of Maine. However, the Governor of Maine, Paul LePage, has stated that she will be expected to self-quarantine herself in Maine. And the nursing school (University of Maine-Fort Kent) which her live-in boyfriend attends has stated he will not be allowed on campus if he has any contact with Hickox. Faced with that choice, he has decided to not attend school during the quarantine period.

It seems that Ms. Hickox is not any more welcome to move around freely in her home state of Maine than in New Jersey.

First, it should be duly noted that sincere thanks and appreciation should go out to Ms. Hickox, Dr. Spencer, Dr. Brantley and the other medical professionals who have given so much in the effort to serve those in the Ebola-infected countries of West Africa. It is a true lesson of humanity and sacrifice in a world where both seem to be in very short supply.

However, what sense would it make to undo all of that good by not following some common sense protocols that have proven to be prudent through the course of many, many years of human activity. Does it not make sense "to be safe rather than sorry" with a disease that could particularly devastate urban communities and a 21st century economy that is so inter-connected?

I appreciate your service, Ms .Hickox, but the weight of public opinion and prudent thought is not on your side.

I find it troubling that as a medical professional Ms. Hickox also does not seem to understand that the very reason for a quarantine is because (using her words) "you cannot predict who may develop Ebola or not". This is the very purpose of a quarantine. You quarantine "to see if they become sick". You isolate those that are sick.

That being said, it is also clear that New Jersey seems like it could have done a better job of handling her quarantine. More on that below. 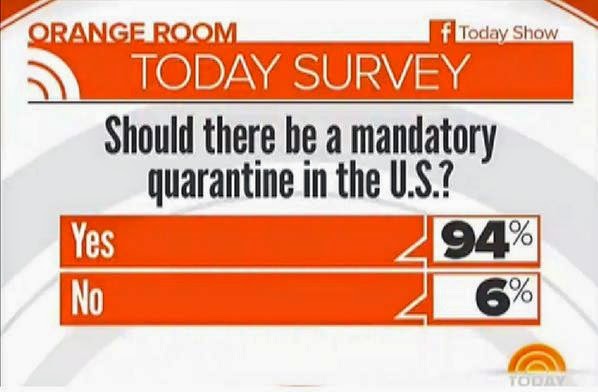 That leads me to provide a little background and history on the history and reason behind a quarantine.

This also comes from the Center for Disease Control (CDC) website.

The practice of quarantine, as we know it, began during the 14th century in an effort to protect coastal cities from plague epidemics. Ships arriving in Venice from infected ports were required to sit at anchor for 40 days before landing. This practice, called quarantine, was derived from the Italian words quaranta giorni which mean 40 days.

Notice that the concern here was the risk of bringing plague into Venice and other coastal cities from ships arriving from infected ports. No one was let off the ship who had been somewhere where the infection was rampant until the incubation period had passed. That is the purpose of a quarantine.
You do not quarantine someone who is symptomatic as by that time it is already too late. At that point the protocol is to isolate the sick from those who are not sick.

They figured this out in the Middle Ages when the risk of transmission was relatively small compared to the risks we have today with air travel and a much more mobile world population. Why do we think we can ignore common sense today?

In the early days of our nation most quarantine efforts were handled by state and local governments, but eventually it was acknowledged that the federal government was in a better position to oversee these efforts as the country became more mobile and transient.

The Public Health Service Act of 1944 clearly established the federal government's quarantine authority for the first time. The act gave the U.S. Public Health Service (PHS) responsibility for preventing the introduction, transmission, and spread of communicable diseases from foreign countries into the United States.


There is authority under that statute "to detain, medically examine or conditionally release individuals and wildlife suspected of carrying a communicable disease."


The list of quarantinable diseases is contained in an Executive Order of the President and includes cholera, diphtheria, infectious tuberculosis, plague, smallpox, yellow fever, viral hemorrhagic fevers (such as Marburg, Ebola, and Congo-Crimean), and severe acute respiratory syndromes.(emphasis added).

Other diseases are considered to pose a health risk to the public but are not considered subject to quarantine under current law.


Many other illnesses of public health significance, such as measles, mumps, rubella, and chicken pox, are not contained in the list of quarantinable illnesses, but continue to pose a health risk to the public.

What is most interesting here again with the Ebola issue is that it is the President of the United States Barack Obama who is not exercising any leadership or the prudent use of his clear executive authority. As a result, Governors in New Jersey, New York, Connecticut and Illinois have announced mandatory 21-day quarantine periods for any health workers returning from West Africa where the federal government has done nothing. Bear in mind, three of these states are led by liberal, Democrat governors.

We are left with the strange fact that the President of the United States will not act when he has the clear legal authority to do so, and it is necessary (Ebola), but he wants to act when he has absolutely no legal authority (Amnesty for illegal immigrants). That is why I have previously referred to him as President Opposite.  It just seems that he has us going in the wrong direction with every step he takes.

Of course, the President argues that to place a 21-day quarantine period on any returning medical worker from West Africa would discourage health care workers like Ms. Hickox and Dr. Spencer from volunteering to help with Ebola treatment in Africa. As a result, the problem will only get worse and put us at greater risk over the long term.

I understand the argument but doesn't that present us with a false choice?

Mickey Kaus suggests that we need to think about the incentives in this case before we say we can't both protect the public today and also provide the needed medical resources to West Africa. I have written before that incentives make the world work. People at first thought Kaus was kidding when he suggested building a luxury resort for returning health care workers but he states he is dead serious. I must say I like his thinking in looking at the problem. 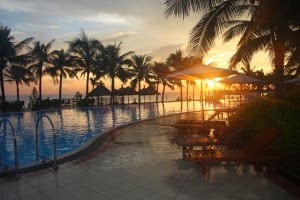 We’d like to quarantine care workers who return from caring for Ebola patients in West Africa — we’re not 100% sure that symptomless people aren’t contagious (“unlikely”), and symptoms seem to come on relatively quickly in any case. Voluntary quarantining has proven incompletely effective. At the same time, we don’t want to discourage volunteer health care workers from traveling to West Africa, where the main fight against the disease is being waged. They’re not exactly encouraged to make the trip if they know they’ll have to spend 21 days in a tent with a portable toilet on their return.

What to do? Protect the public here or incentivize workers to go there? This is a false choice! What’s needed is a quarantine so luxurious that health care workers will look forward to their 21 day quarantine, or at least not dread it. What if the federal government took over an isolated resort, say on the Gulf Coast. Stocked it with finest foods and wines in the land, and the best films and recreation and wireless Internet access and volunteer musical acts —  a French widow in every room, as a friend of mine used to say, equivalent to a very expensive vacation, available for free to any returning volunteer. The only catch is they couldn’t leave for 21 days. (They could bring their spouses and partners, if they wanted –but then the spouses couldn’t leave either).


I would take Kaus' idea one step further. I would make the quarantine period a paid vacation compliments of the federal government.  I might also make that pay tax-free and throw in a round trip charter flight to West Africa for every health care volunteer to boot.

How much did we spend on President Obama's tour of Africa last year? As much as $100 million according to a story in The Washington Post last year.  A 21-day tax-free paid vacation for the necessary health care workers would be a pittance compared to that expenditure.

How much would it cost to do contact tracing and monitoring on everyone on a New York subway? I don't want to even guess at the manpower and money required.

How much damage to the economy would be done if even a few hundred Ebola cases popped up over the next several months across the country. Incalculable.

Quarantine, isolation and incentives. There is a place for all of them in taking on Ebola. All it takes is a little leadership, imagination and money. We might not have any of them but we can surely borrow something from someone. We can start by borrowing proven tactics from our forefathers on how to combat communicable diseases. It starts with Q.