The Power of Potential

Why does a untested high school pitcher command a bigger signing bonus from a major league baseball team than a proven major league pitcher with six years of experience as a starter?

Why does a fledgling tech company IPO result in a market cap far in excess of a steady and profitable company that has a 10 year record of success in the marketplace?

Why does the up and coming young MBA a few years out of school get the promotion over the steady, seasoned and loyal 10 year manager?

Why do NFL fans of mediocre teams always clamor for the 2nd string quarterback?

Why did an untested Barack Obama beat two candidates (Hillary Clinton and John McCain) who were both more accomplished and experience than he was?

All of this stems from the human tendency to favor potential over achievement. In effect, "the potential to be good at something is preferred over actually being good at the very same thing."

Those are the words of Zakary Tormala who is an Associate Professor at Stanford's Graduate School of Business. I recently saw Tormala speak at a conference on this subject and I thought his research into this subject was interesting and enlightening.

Tormala has an academic interest in psychological certainty (and uncertainty) and its effects on our behavior and decision making.  For example, if someone is certain in their beliefs it is very difficult to get them to change their mind to consider new choices. On the other hand, people who are uncertain are much more willing to have an open mind and consider new options.

What are the implications of this in the real world?

It is critical that people in sales and marketing understand the role of uncertainty. Someone who is certain is going to be impossible to sell under almost any circumstances. The only way to get them to consider your product is to introduce some uncertainty (for example, a new insight or threat that they might not have been aware of) to get them to open their mind for other options or choices.

What is interesting in comparing potential versus achievement is that uncertainty seems to have the opposite affect you would expect according to research that Tormala conducted with two other collaborators that was published in the Journal of Personality and Social Psychology.

Evidence of achievement should reduce uncertainty about a person’s talent and boost confidence about his or her future success or high performance. Potential, on the other hand, is fraught with uncertainty by its very nature: An individual with high potential might achieve greatness but very well might not. Because potential leaves more room for doubt about a person’s true talent or future outcomes, it stands to reason that achievement should be viewed as more impressive than otherwise equivalent potential and should often be viewed as a stronger or more reliable indicator of future success.


However, that is not the case most of the time. Potential trumps achievement in people's minds a lot of the time.Although achievement provides certainty, the uncertainty of potential seems to be more engaging and interesting to people.

We postulate that potential is more interesting and engaging than achievement precisely because it is less certain and more ambiguous. Indeed, considerable research has revealed that relative to certainty, uncertainty can sometimes stimulate greater interest and involvement and, ultimately, deeper processing.

Thus, we suggest that the uncertainty surrounding individuals with high potential makes them more interesting, which draws people in, increases processing, and can have positive downstream effects on judgments.


About now I am sure you are saying, "Enough with the academic speak!".

"What are you talking about in the real world?"

Here is a "real world" example based on one of the experiments that Tormala did to prove the power of potential.

The experimental study involved an ad campaign on Facebook involving a real comedian named Kevin Shea who was growing in popularity  at the time. Shea had just launched a fan page of Facebook so Tormala and his fellow researchers took out ads on Facebook to see how many clicks the could garner to Shea's Facebook page.

The only difference in the ads was a small change in wording of the header. One header touted achievement and the other emphasized potential.

They also measured two well-known persuasion strategies. The extent to which individuals were persuaded by experts (Source Credibility Appeal) and by others (Social Proof Appeal).

The "Expert" header in the ad read like this for Achievement.

Critics say he has become the next big thing.

The "Expert" header for Potential was this.

Critics say he could become the next big thing.

The "Social Proof" header in the ad read like this for Achievement.

Everyone is talking about Kevin Shea.

The "Social Proof" header for Potential was as follows.

By this time next year, everyone could be talking about Kevin Shea.


Therefore, it really was the case of "he has arrived" vs. "he could arrive".

What were the results? 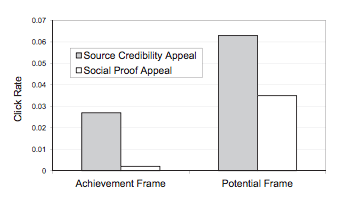 It is pretty incredible if you ask me how powerful potential was compared to achievement.

When the source was stated to be experts (like critics) there were about 2x the number of clicks to find out about the potentially great comedian Kevin Shea than the Kevin Shea who was already great.

When the source was simply the opinion of others (non experts), there were almost no clicks unless it was about potential. There was almost no interest in clicking through to find about someone who everyone was already talking about.

Tormala may be correct that uncertainty is driving more interest in potential than achievement here.

However, I believe there is another big factor at play here that he is overlooking.

That factor is "Social Currency".

The fact is that human beings like "to be in the know".  They also like the feeling they get when they find out about something new. Why? So they can tell someone else to show how "smart" or "clued in" they are. After all, when it comes to all of us, it is mostly about us.

Don't you know that feeling yourself?

There is no fun in telling something to someone who already knows it. It is fun to tell somebody something new.

I think my thesis also explains the difference between when the source is an "expert" versus a "non-expert". If you think about it, most people would consider an expert to be "in the know" and "ahead of the curve" compared to non-experts. Therefore, people are more willing to consider the achievement frame from an expert than a non-expert because it is more likely they know something everybody does not. That is why there were more clicks on the achievement frame for source credibility but almost none for social proof appeal. "If everyone else is already talking about this guy why bother checking it out? Who am I going to tell so I will look like I am clued in."

I think there is another factor at play here as well. That is the fact that most human beings are naturally optimistic. Life is hard if you don't believe that tomorrow is going to be better than today. We have a natural tendency to believe in the next great thing. That is what drives people to get out of bed in the morning. Tomorrow will be better.

On the other hand, achievement has boundaries. You know the top and the bottom of the range of achievement. Potential is boundless, especially on the upside. Hope does spring eternal.

In conclusion, think about the power of potential. It has significant practical implications. Think about how you present things to others and how you state things when it comes to achievement versus potential. Small word choices can have large impacts on persuading others as Tormala points out in another article on this subject.

If you're recommending someone for a job, a promotion, or admission to graduate school, it would be wise to highlight that person's potential. Our take is that framing your support for a person, a restaurant, a cause — and many other things — in terms of potential as opposed to achievement could make your case more persuasive.

We found that even seemingly minor word choices made a difference. Participants in one study evaluated a job applicant more favorably when he had performed well on a test called the "Assessment of Leadership Potential" rather than one called the "Assessment of Leadership Achievement." So someone who scores well on a Scholastic Aptitude Test might be perceived as a stronger candidate than someone who scores well on a Scholastic Achievement Test. A subtle shift in word choice can have a big impact on interest and engagement.