Turned On And Turned Out

The mid-term elections are two weeks away. The major question is whether the Republicans will be able to gain majority control of the U.S. Senate. Many are also interested in whether the GOP can increase their seats in the U.S. House and protect the gains they have made in statehouses around the country the last few years.

Predicting political races in recent years is not so much understanding polling but figuring out who will actually show up at the polls. The electorate has become increasingly partisan and those partisans seem to be easily partitioned into demographic sub-groups that have voted predictably in past years.

For example, young and black is most likely a Democrat vote. When you have old and white you can lay pretty good odds they are voting Republican.

This graphic by Steven Sailer gives you a sense of how the partisanship was partitioned by groups in the 2012 Obama/Romney race.

In other words, if you are a single, black lesbian who rents you were likely to vote Democrat in 2012.

If you were a married, white Mormon who owned their own home, the Republicans could probably count on your vote.

Why is this worth revisiting two weeks before the 2014 election?

I believe it is relevant because the results of the election will most likely be determined by the turnout of those red and blue groups above.

History would suggest that the Republicans should have an advantage in this regard as older voters and white voters have traditionally been more reliable in turning out at the polls in mid-term elections than young voters and black voters. 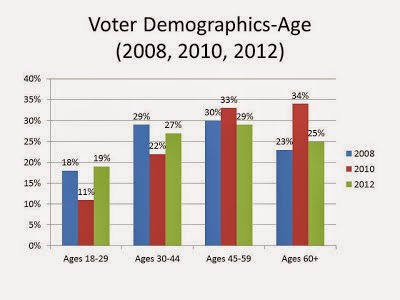 It is even more interesting to look at the total number of young voters (ages 18-29) compared to older voters (age 60+) for the last three elections. 30 million older voters showed up consistently at the polls in each of those three elections.  However, 24 million young voters came out in 2008 to help elect Obama, only 10 million showed up in 2010, and 23 million reappeared in 2012 to save Obama. 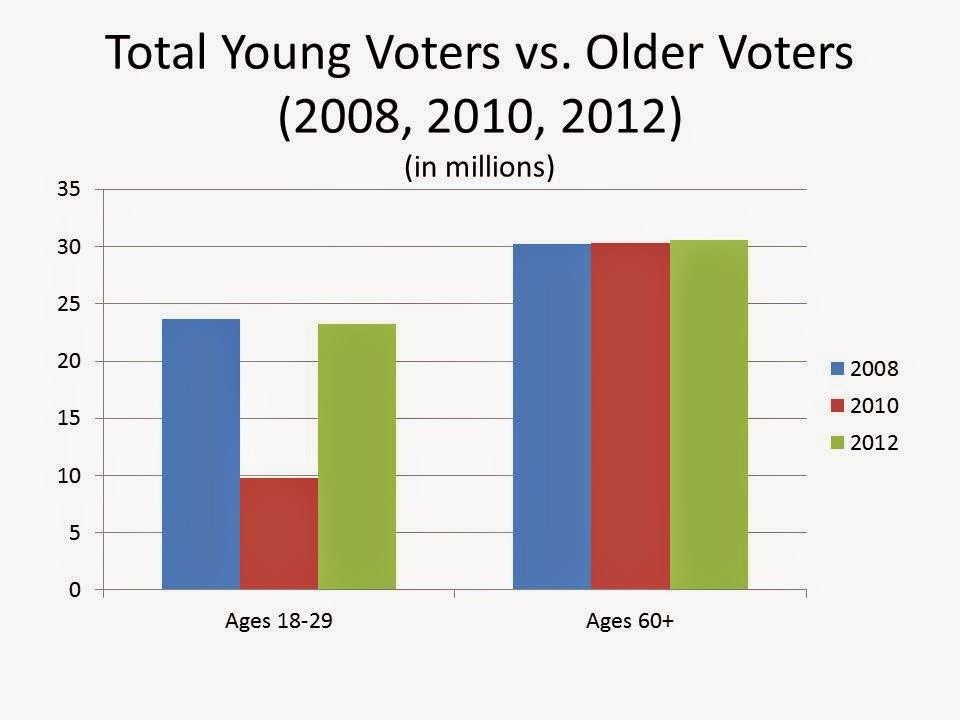 Why is this important?

However, if only 10 million young voters show up at the polls (as they did in 2010) in two weeks to support Democrats, that will only be 6 million youth votes compared to 16.8 million votes for seniors in 2014 assuming senior age group continues to vote as they have in the last several national elections. That equals a 10 million GOP voter advantage that will be difficult for Democrat candidates to overcome.

The chart below shows the ebbs and flows in voter turnout by age group since 1964. Click on the graphic to see a larger version of the chart.

Will we see a repeat of 2010 this year with younger voters staying home?

The other key demographic for Democrats in this elections are African-Americans. 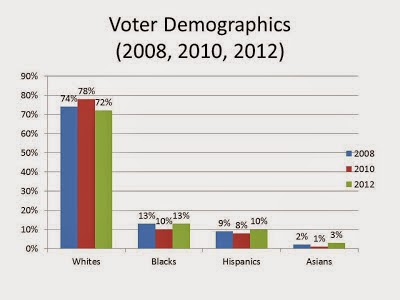 These may look like fairly small percentage changes but when applied to the total votes cast in each election it amounts to millions of votes.

The 10% that African-Americans represented in the 2010 election amounted to only 9 million votes. This amounts to a loss of some 8 million votes for Obama's policies compared to Obama the candidate. That is a deep hole to dig out of in any election.

You don't have to look at much more than this demographic data and past voting patterns to realize that turnout will be everything in the coming election.

That is why you are going to see a massive push by the Democrats in the next two weeks to do everything they can to gin up support among Black voters.

Who can get their voters to the polls?

The Democrats certainly face the biggest challenge in this regard. Historical voting patterns are not on their side. The leader of their party is deeply unpopular. The mood of the voters is decidedly negative (64% of voters say the country is on the wrong track according to most recent poll data) which usually means the President's party is responsible to a higher degree. If you are a Democrat it is hard to get excited about much of anything right now.

On the other hand, the Republicans have not done a very good job of showing what the right track might look like and the GOP is not immensely popular for their work in Congress either.

What I am most interested in seeing is whether the Democrats can come close to replicating the get-out-the-vote effort they were successful in doing in 2012. I thought that there was no way they could come close to matching the turnout numbers for their key groups in 2012 as they did in 2008. They did it and that is what won the election for Obama.

In fact, as I was writing this blog I went back over many of my blog posts leading up to the 2012 election and I have to admit I still have a difficult time in reconciling the numbers in how the Obama campaign was able to get the turnout they did with Obama's four year record and the economy.

If the Democrats can do it again in 2014, after another two years under Obama that makes the first four years look like 'the good old days', I will be at a total loss to explain it. It just does not add up based on a review of historical patterns and practices.

In that event, there will be only be two reasonable conclusions and, quite frankly, are almost unthinkable to me...

2) There is some type of massive voter fraud occurring within the system.

In the past, I would have scoffed at the second conclusion but you have to wonder when you see two stories like this in one week.

The only thing I know for sure right now is that we have a long two weeks ahead of us in political posturing and positioning from both sides.

That will culminate in a long election night filled with plenty of politicos and pundits from all sides.

May everyone choose wisely.