A few ruminations and observations about Ebola as I have seen the news develop over the last few weeks.

I appreciate and respect the compounding effects of mathematics. This is the main concern I have had about Ebola from the beginning. It is beyond me why anyone who looked at the serious nature of this disease and considered the risk from the mathematics from exposure to it would have allowed anyone from West Africa into this country as President Obama did.

Consider this graphic comparing how fast Ebola spreads and how deadly it is compared to other diseases in the Washington Post article of October 9, "The Ominous Math of Ebola". 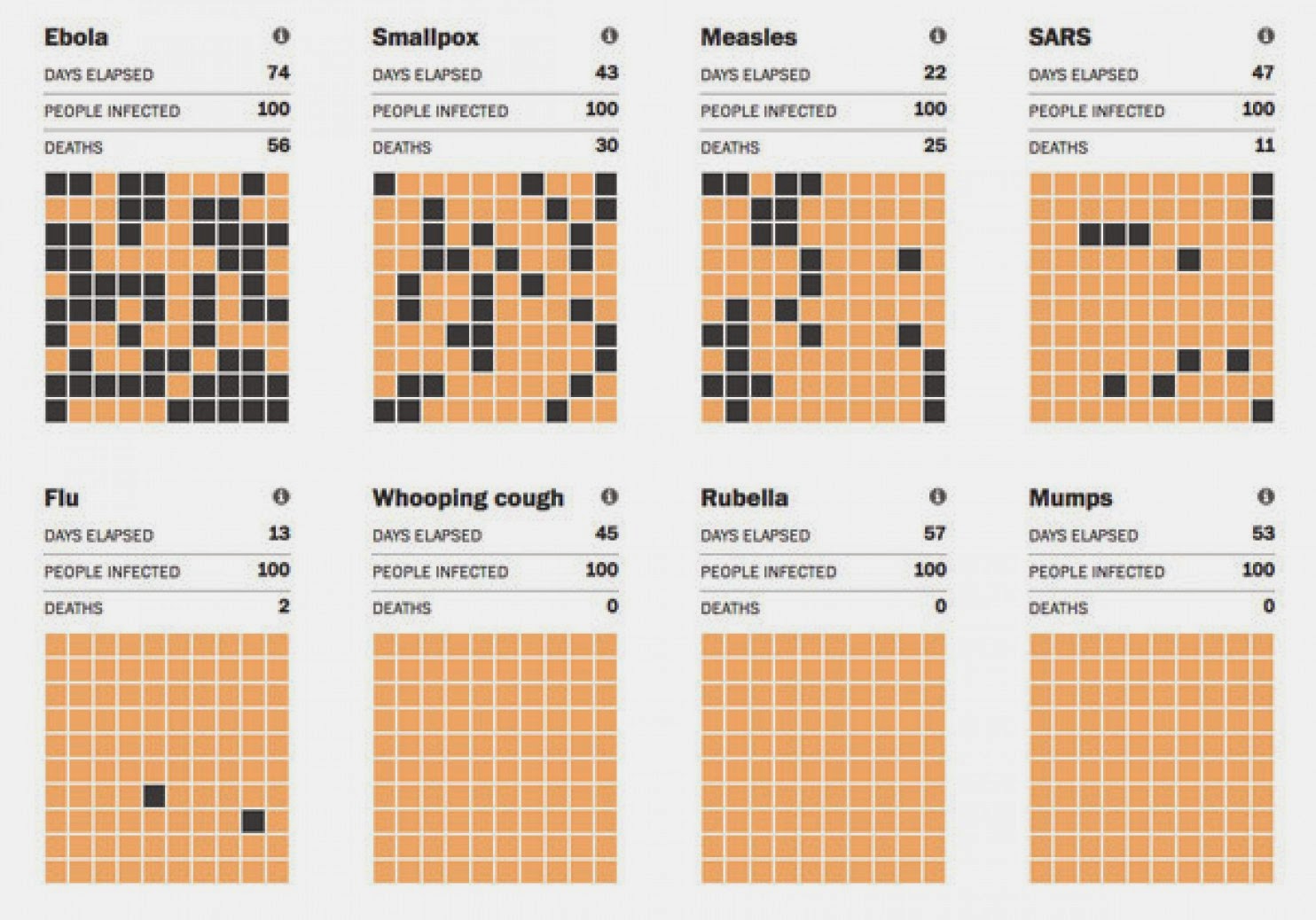 There is simply too much risk to the population to not take the most basic measures to contain the disease.

If you will recall it was President Obama who stated less than a month ago "that the chances of an Ebola outbreak here in the United States are extremely low".  That statement was just three days before Thomas Eric Duncan bordered a flight to the United States and nine days before he first sought treatment at a hospital in Dallas.

I went to law school at Emory University in Atlanta which is a stone's throw away from the Center for Disease Control in Atlanta. I knew people that worked there and had a lot of respect for them. When I go back to Atlanta it is amazing to see how much the CDC complex has grown since I graduated in the 1970's.

However, when I look at how the entire Ebola crisis has been handled I have to ask what is going on there now?  It appears as if they have no idea what they are doing starting with the Director of the CDC, Dr. Tom Frieden. It seem to be a constant flow of mistakes, misstatements, mea culpas and contradictions.

These are a few examples of what I am talking about.


Dr. Tom Frieden, director for the Center for Disease Control and Prevention (CDC), said during a telephone press briefing Wednesday that you cannot get Ebola by sitting next to someone on a bus, but that infected or exposed persons should not ride public transportation because they could transmit the disease to someone else. Ace of Spades


The day before she went to the hospital with Ebola symptoms, Amber Vinson was flying across the country on a commercial jet with 132 other people.

Now the man leading the U.S. fight against the deadly virus says she never should have stepped foot on the flight.


"She should not have been on that plane," Centers for Disease Control and Prevention Director Dr. Tom Frieden said Wednesday after the nurse was confirmed to have Ebola. CNN


We found out later that the nurse got on the plane with a low-grade fever. Even more incredibly, it is now reported that the nurse called the CDC before she got on the Cleveland-Dallas flight and told them she had a 99.5 degree temperature and was told she could get on the flight anyway. I am a total loss to explain any of this from what is supposed to be the Center for Disease Control.

Frieden blamed the first nurse who contracted Ebola while caring for Thomas Eric Duncan on a "breach of protocol" effectively throwing the young nurse under the bus.

"We don't know what occurred in the care of the index patient, the original patient in Dallas," said Frieden in a press conference Sunday morning, "but at some point, there was a breach in protocol, and that breach in protocol resulted in this infection." Breitbart.com


Frieden eventually apologized for suggesting the nurse who contracted Ebola was to blame and admitted that the agency had to 'rethink' how to combat the deadly virus.

It should also be remembered that Frieden stated just two weeks ago that "any U.S. hospital with isolation capabilities can care for an Ebola patient." With two nurses at Texas Presbyterian Hospital in Dallas (by the way, this is a 900 bed facility in a major metro area) already infected, you have to say that this is the biggest misstatement of them all from this guy.

Frieden says that the CDC didn't get it right at first but they will do it better in the future.

The director of the Centers for Disease Control and Prevention (CDC) on Tuesday said a Dallas nurse diagnosed with Ebola might not have gotten the virus if the response from the federal government had been different.

CDC Director Tom Frieden pledged to dispatch emergency response crews to any hospital in the country where Ebola is diagnosed, and said such a response might have prevented Nina Pham from getting the disease.

“I wish we had put a team like this on the ground the day the first patient was diagnosed. That might have prevented this,” Frieden said. “But we will do that from this day onward with any case anywhere in the U.S.” TheHill.com

It will be amazing to me if Dr. Frieden is not forced to resign soon. He makes Mike Brown ("Brownie, you're doing a heckuva job"), the FEMA Director during Katrina who was forced out after missteps in the aftermath of that hurricane, look like a genius.

The Role of Government

Many see the government response to the Ebola outbreak and argue that this is another example of why we should not rely on government. I could not disagree more.

When you have something like Ebola you need government more than ever. However, you need a thoughtful, competent government that is focused first and foremost on the safety and security of its citizens. Public health is a core function that only government can do well. This is when you need to have the structure, order and security support that only a well-functioning government can provide.

Our problem is that this is not the government we have been getting. Our government has been focused on all the wrong things. It has been more concerned with redistribution and political correctness than in true government and the safety of its citizens.

Look no further than the budget of the CDC over the last few years and how it has spent money from its Prevention and Public Health Fund.  Gov. Bobby Jindal of Louisiana provides the facts. Jindal knows something about this subject as he used to be the principal policy adviser to the Secretary of Health and Human Services.

Consider the Prevention and Public Health Fund, a new series of annual mandatory appropriations created by Obamacare. Over the past five years, the CDC has received just under $3 billion in transfers from the fund. Yet only 6 percent—$180 million—of that $3 billion went toward building epidemiology and laboratory capacity. Especially given the agency’s postwar roots as the Communicable Disease Center, one would think that “detecting and responding to infectious diseases and other public health threats” warrants a larger funding commitment.

Instead, the Obama administration has focused the CDC on other priorities. While protecting Americans from infectious diseases received only $180 million from the Prevention Fund, the community transformation grant program received nearly three times as much money—$517.3 million over the same five-year period.

The CDC’s website makes clear the objectives of community transformation grants. The program funds neighborhood interventions like “increasing access to healthy foods by supporting local farmers and developing neighborhood grocery stores,” or “promoting improvements in sidewalks and street lighting to make it safe and easy for people to walk and ride bikes.” Bike lanes and farmer’s markets may indeed help a community—but they would do little to combat dangerous diseases like Ebola, SARS or anthrax.

You read that right. Of $3 billion spent by the CDC out of its Prevention and Public Health Fund over the last five years, three times as much money was spent on community transformation grants (healthy foods, inner city grocery stories, bike lanes and street lighting) as was spent on programs protecting, detecting and responding to infectious diseases and other public health threats.

If that is not putting politics above public health I don't know what it is.

The problem is not government, it is the current government and leaders we have. It is having the wrong priorities and the wrong policies.

I have written so often about the book, The Fourth Turning, that I am sure many of my readers are sick of me writing about it.

However, once again, William Strauss and Neil Howe seem prescient on what lies ahead. This is what they wrote in 1997 about a possible crisis scenario that could await us in "The Fourth Turning".


Ben Franklin said that "an ounce of prevention is worth a pound of cure." I guess someone forgot about that along the way in our government.

Keep in mind that there were a long string of decisions by "the government" that were made along the way that could have prevented the situation we are in today. We could have banned anyone from West Africa from entering the country beginning a month ago. In fact, this article indicates that Duncan should never been issued a tourist visa to begin with based on his profile-unemployed, single, and sister living in the U.S-because the odds were strong that he would overstay his visa and become another illegal immigrant. We could have spent money on Ebola prevention at the CDC rather than bike paths and farmers markets in urban areas. We could have made sure the nurses at Texas Presbyterian had the equipment and training to treat Duncan. The list is long.

Just another example of why we need to return to the founding principles set forth by our founding fathers that focused government on government.

I just hope my ruminations about Ebola can end soon and we can hold off any ruin. If not, more and more people will rue the day that Barack Obama was elected President of the United States.
Posted by BeeLine at 11:23 PM