It was 9 degrees when I woke up yesterday morning in Cincinnati, Ohio. The official low was 12 degrees that ties a record low for November 18 dating back to 1880. It was 15 degrees starting out this morning. That is more than 20 degrees lower than the average for this date. We are seeing the same over most of the country this week.

We also got 4.8 inches of snow on Monday compared to an average of .4 inches that Cincinnati typically receives for the entire month of November. Some areas of Buffalo, NY got as much as 76 inches of snow in the last 24 hours!

Climatologist John L. Casey believes we are in the beginning stages of a new weather pattern bringing much colder temperatures that may last for the next 30 years.

What about Al Gore and the global warming alarmists?

Casey argues that they have it completely wrong.


The earth, he says, is cooling, and cooling fast.

And unless the scientific community and political leaders act soon, cold, dark days are ahead.

Casey says the evidence is clear that the earth is rapidly growing colder because of diminished solar activity.

He says trends indicate we could be headed for colder temperatures similar to those seen in the late 1700s and early 1800s when the sun went into a "solar minimum" — a phenomenon with significantly reduced solar activity, including solar flares and sunspots.

Casey is a former NASA engineer who has also recently written a book, "Dark Winter: How the Sun Is Causing a 30-Year Cold Spell," in which he forecasts increasingly frigid temperatures and eventual food shortages caused by the colder climate. Colder weather will also affect the earth's crust which could lead to more volcanic and earthquake activity. 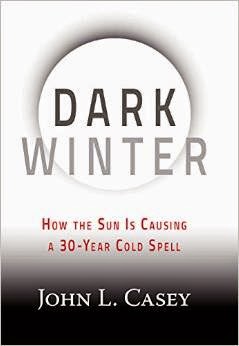 Casey even suggests that he thinks that Putin is interested in the Ukraine because of its more temperate climate and Russia's heavy reliance on its wheat crop from that region during cold weather times. A noted Russian astrophysicist believes that we are already entering a mini-ice age.

All of this reminded me of a blog post I wrote in February, 2011 in which I wrote about some of the same themes that Casey is talking about in his book.

If given a choice between global warming and cooling---I will take warming every time. I don't say that just because I prefer golf and the beach over skiing. There are very significant geopolitical and economic reasons to prefer a warmer over a cooler climate.

Human beings tend to get very angry and irritable when they are cold and hungry. They are much more content when they are warm and their stomachs are full. Read on about my thoughts on all of this from almost four years ago.

I am not a climatologist or meteorologist. However, I consider myself a practical thinker who makes decisions by looking at facts. I have also learned that it is always important to look beyond the "facts". How are the facts packaged and what is the motivation of the messenger?

Over the years, I have listened to the claims about human created global warming. Without even spending a lot of time on the science, these claims never seemed to make sense to me. The planet is known to have warmed and cooled over the years. Even if the data shows it is warming, how do we know it is caused by man when you look at past history? We know there was an ice age. We also know the ice melted. How did it ice up? How did the ice melt?

I can't help but be a little skeptical when I also see the changing explanations about the climate.  In fact, it does not even seem to be global warming we are worried about any more, it is climate change.

We heard a few years ago that we would see far less snow because of global warming.  When we got more snow, we were then told this was caused by the warming. It is all very confusing for something that is supposed to be so settled in science.

I also remember in the late 1970's and 1980's all of the talk from scientists was concern that the planet was cooling. What happened?  That was only a few short years ago- a speck of time in the history of the earth.

When you consider past history you also quickly realize that God dwarfs anything that man can do. For example, the year 1816 was considered "The Year Without a Summer" after Mount Tambora erupted and the ash seemed to veil the sky across large swaths of earth.  Crops failed around the world and famine followed.  Riots and political unrest were not far behind.  People tend to get really angry when they are hungry. How much did the average global temperature fall that year? - only about 1 degree!

That story has always made me much more concerned about global cooling than warming. A rise in temperatures is actually beneficial for food production. It can extend the growing season further north. Cooler temperatures do the exact opposite.  Given a choice there is little doubt where I come down.

Our friends at Powerline are right on the mark again with "Scientists Set The Alarmists Straight".  If you want to get yourself grounded in the facts on the issue check it out.  Powerline's own view is summed up as follows:


"The global warming hoax survives only because most people do not take the trouble to learn the facts for themselves."

There are several links listed where you can research the facts and science yourself.  Make up your own mind. However, this looks more like a political agenda than science to me.  But if climate change is real then give me warming rather than cooling. I do better when I am warm and have food than when I am cold and hungry. How about you?


Full disclosure- I wrote this when it was 7 degrees so that may have affected my objectivity on the subject.
Posted by BeeLine at 5:22 PM