My mother used to say this after she had sized up someone and determined that their substance did not match their style.

The smartest boss I ever had used to say this to me when we ran across people that sounded and looked great but when you considered what they really said or did, there was nothing there. In the corporate world these people could quickly impress others and be persuasive in their presentation, but it ended there. They added nothing. In fact, they usually resulted in a net subtraction to the organization because they had people doing the wrong things for the wrong reasons.

Who do you think of first when I say, "All show and no go" or "Articulate Incompetent"?

Our President seems to care most about perception, politics and presentation. Substance and sense rarely make his list.

You need to look no further than yesterday's announcement about the climate deal he "negotiated' with China on carbon-reduction emissions.

Granted, the headline looks good and President Obama knows that very few people will ever get beyond that. This is how the headline read in yesterday's New York Times.


U.S. and China Reach Climate Accord After Months of Talks

To meet this goal there will be more restrictions and regulations of coal and other fossil fuels. The result will be higher electricity and energy costs that businesses and consumers in this country will have to pay.

What is China going to do in return?

Nothing. Until the year 2030. At that time China would cap its growing carbon emissions.

You might think that does not look right at first glance. However, it you thought about it for a minute or two longer you might conclude that it would make sense if China is "catching up" to the U.S. in carbon emissions as its economy is growing.

However, the fact is that China is not catching up to the United States in carbon emissions. It is already spewing out far, far more than the U.S.

This chart, using USEIA data, shows that China's total carbon emissions in 2012 were 8.5 billion metric tons annually (and growing) compared to 5.3 billion in the United States (and declining). 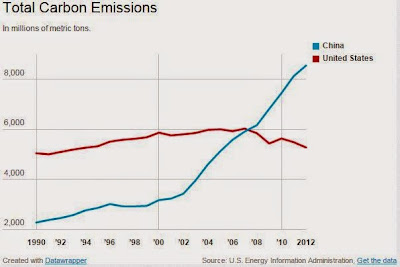 Even if you adjust these numbers for population and compare the numbers on a per capita basis (China currently has about 4x the population of the U.S), the United States will be a loser.

The biggest loser in this country will be Americans looking for good-paying jobs. That is a certainty.

The next biggest loser will be planet earth if you believe the global warming alarmists. Under this agreement China can continue bringing a coal-fired power plant online every 10 days (as they are currently doing now) carte blanche compliments of our President.

This should alarm the alarmists. They continually are warning of a looming climate catastrophe but most of their attention is focused on the United States which is a relatively small piece of the puzzle.

Liberals will argue that it is better to have some "agreement" with the Chinese than no agreement. However, I think that thinking is misguided. First of all, this is not a binding agreement on the Chinese. They can do as they please. There are no consequences if they do not live up to the agreement. At the same time, Obama has effectively given China a blank check to do whatever they want for the next 16 years. This "deal" insulates them from any criticism or condemnation in the interim. China can simply point to their "agreement' with Obama. It is nothing but theatrics but it protects the Chinese from any attacks from the global warming crowd.

Since 2005, the U.S. has reduced energy-related CO2 emissions by one billion tons but China has increased emissions by over two billion tons. Guess what? If you are concerned about CO2 emissions and you are on planet earth, you are losing.  And it is not because of anything that the United States is doing. If China is not cooperating (and India and others) the problem will not be solved.

The irony is that as we shut down our coal powered generating plants, China and India are building hundreds of them.  In fact, a recent study indicated that over 1,000 coal-fired plants are planned around the world with 75% of them in India (455) and China (363).

In other words, it is "all show and no go" as my mother used to say.

Or to put it another way...


Only in the mind of an articulate incompetent does it make sense to...


shut down your most cost-effective energy generating source,


shut-off your most abundant energy resource,


raise electricity costs on all Americans,


and risk losing hundreds of thousand of jobs in the process.


In an attempt to solve a problem...


that we are not even sure we have,


and if we do, we are not sure we can do anything about it,


because of natural or external forces that we cannot control,


that may overwhelm anything we do anyway,


that ultimately works to the advantage of your biggest trade partner,


that will undoubtedly result in more job losses for Americans over the longer term.

In the end, it is all about atmospherics with Barack Obama. And I am not talking about carbon emissions in the air.

I thought it was interesting that while writing this blog post I saw this headline about China hacking into the National Oceanic and Atmospheric Administration (NOAA) recently.


Am I the only one who sees the irony in the fact that our President is celebrating a "climate change breakthrough" with a country who at the same time is hacking our oceanic and atmospheric weather information systems? Pretty soon we will not know what to believe about those global warming statistics!

It really is all about atmospherics with both President Obama and China!
Posted by BeeLine at 8:10 PM