Charting the Course of Oil

Oil prices have been on a downward march. This week they went below $50 per barrel, which is a 5-1/2 year low.


It is less clear to me why the price of oil has dropped so far and so fast.

If you applied normal economics principles, you would attribute it to greatly increased supply or rapidly falling demand.

However, look at this chart that shows world supply and demand for oil from Yardeni Research, Inc. over the last couple of decades.


Both supply and demand are in relative balance as they have been for quite some time.

You see this as well through a chart showing the Oil Supply/Demand Ratio. There has been a small decrease in the ratio but nothing dramatic to suggest the price of oil should have dropped 50% in six months. 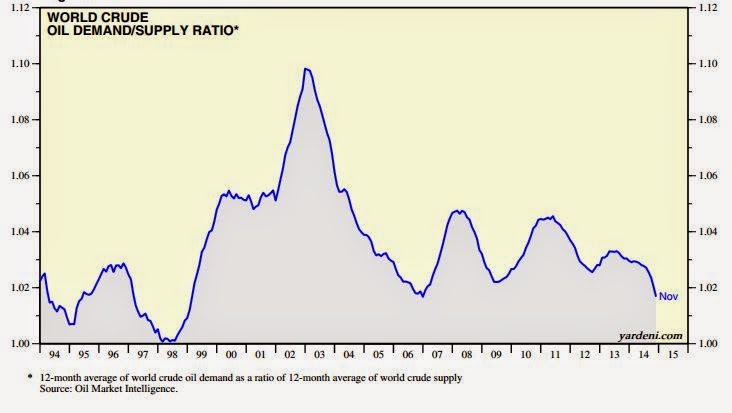 This led me to take a little deeper look at some of the charts that Yardeni Research put together in "Energy Briefing:Global Crude Oil Demand and Supply" that was released on January 7, 2015. These charts provide some great perspective and context on the changes that are occurring in the crude oil markets around the world.

For example, consider the significant change in where the demand for oil is occurring around the world. Did you realize that the United States, Western Europe and Japan are consuming almost 20 million fewer barrels of oil than the rest of world each day? 10 years ago these "old world" economies made up half of global crude oil demand.

And that oil demand from these so-called "old world" is actually over 10% lower than it was six years ago.

At the same time, oil demand in the 'new world' has increased by almost 40% (15 million barrels per day) compared to a decade ago.

Seeing this I am even further confused how carbon taxes on the United States and Europe would have any meaningful impact on global carbon emissions when the vast majority of carbon consumption is being done elsewhere. The global carbon footprint has changed dramatically in the last ten years. Has Al Gore, Barack Obama or any other carbon tax campaigner noticed it? 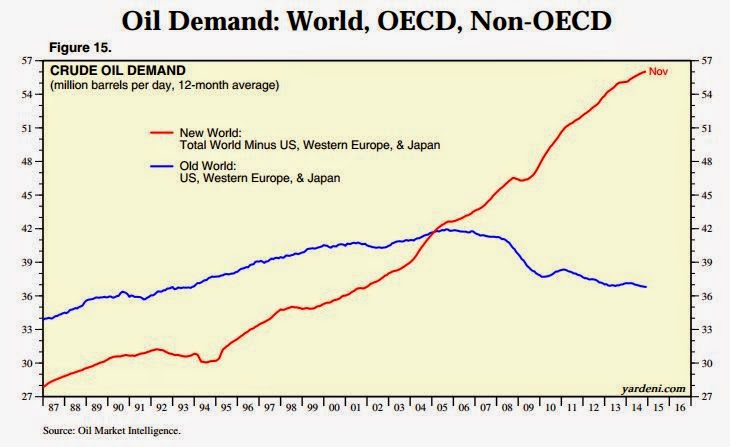 How about the supply side?  Where is the oil coming from? That has also changed dramatically.

Look at this comparison of U.S/Canada crude oil output compared to Saudi Arabia. 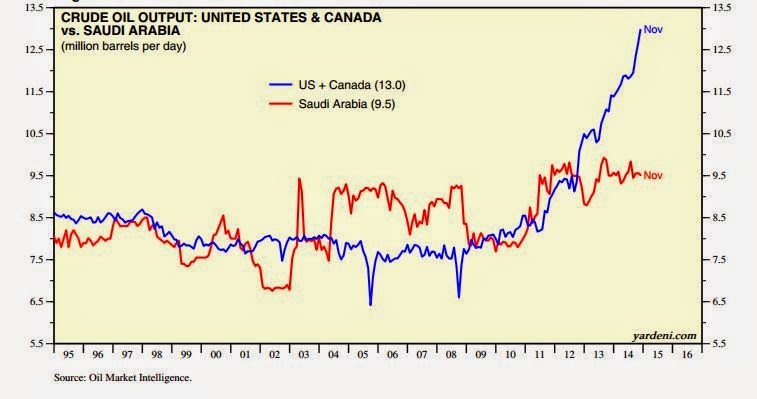 Or this comparison of North American crude oil output compared to Russia. 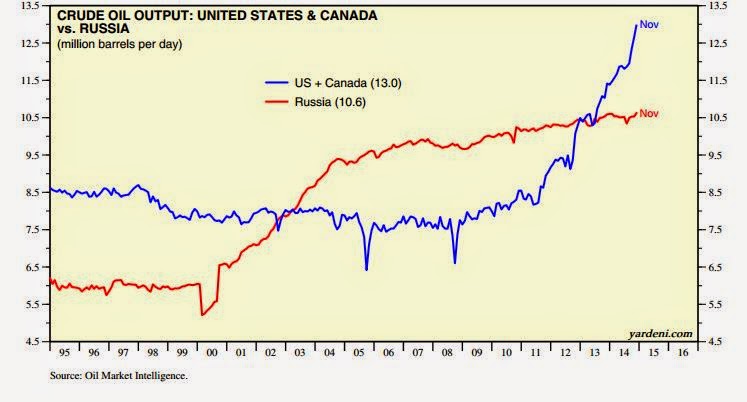 The amount of oil being produced in North American over the last five years has been a game changer. However, this increased oil supply appears to merely keeping pace with increased global demand (especially in the "new world').

It appears to me that something else is going on outside of free market economics to drive the price of oil down so far in just six months. It would seem that the Saudis have to be deeply involved in some way. Is it to drive the shale oil producers in North America and other higher cost areas out of business? Is it to harm Iran, ISIS and others that might threaten the kingdom? Can the Saudis simply not afford to cut back production to push the price higher as they need the cash flow to maintain their lifestyle and keep their population from getting restless? Or a combination of these and more?

I am not smart enough to know the real reason but it just does not seem to be simply a case of a supply/demand imbalance that is driving this price action. At the same time, it appears that the increased drilling, exploration and production in North American oil fields has forced the hands of the Saudis in some form or fashion. As a result, they have intervened in a big way to protect themselves.

Via Chris Mayer at The Daily Reckoning I came across this explanation from economist Warren Mosler who writes a blog (The Center of the Universe) and is a pioneer in the school of macroeconomic thought called Modern Monetary Theory (MMT).  Mosler points the finger at the Saudis, not excess supply.

First, you have to understand that the Saudis are the world's swing producer and price setter. They supply the last 9-10 million barrels of crude oil consumed every day. "The Saudis don't sell at spot price in the marketplace, but instead simply post prices for their customers/refiners and let them buy all they want at those prices," Mosler wrote. "And most recently, the prices they have posted have been fixed spreads from various benchmarks, like Brent."

So if they decide, as they have done, to sell at a discount and let refiners buy all they want, this drops the price for everyone, as buyers key off of Saudi pricing. These demands require suppliers to meet that price or leave oil unsold as long as the Saudis can meet the demand. Either way, the Saudi action creates a downward spiral in price as they continue to offer a discount.

Meanwhile, the demand for oil has been steady, Mosler shows, indicating no "supply glut" but instead a reaction to Saudi pricing. Thus, oil prices won't go higher, until:

1) The Saudis raise their price or
2) Physical demand goes up beyond the Saudis' capacity to increase production.

"The Saudis never 'cut production,'" Mosler notes. "They just set price and let the world buy what it wants at their price. No one seems to know that. As no one ever asks if they are going to raise the price."

The Saudis have the world's oil markets by the tail. Unless one (or both) of those two things noted above happens, it is hard to imagine a scenario where oil prices get back anywhere near $100 a barrel, or even $80.


You understand all of this better when you see the comments of Saudi Arabia's Oil Minister, Ali al-Naimi,who recently said this in response to whether OPEC production would be cut in the face of falling prices.

“It is not in the interest of Opec producers to cut their production, whatever the price is,” he told the Middle East Economic Survey.

In the MEES interview, Mr Naimi said Saudi Arabia and other Gulf oil producers would be able to withstand a long period of low crude prices, largely because their production costs were so low — at only about $4-$5 a barrel.

But he said the pain will be much greater for other oil regions, such as offshore Brazil, west Africa and the Arctic, whose costs are much higher.

“So sooner or later, however much they hold out, in the end, their financial affairs will limit their production,” he said.

“We want to tell the world that high efficiency producing countries are the ones that deserve market share,” said Mr Naimi . “If the price falls, it falls . . . Others will be harmed greatly before we feel any pain.”


Who will be harmed?

It certainly will not be the American consumer in the short term. It remains to be seen what the effects may be in the longer term.

In closing, I thought it might be fun to take a retrospective look at what a couple of politicians said about increased drilling and exploration in the United States a few years ago and the prospects it might have for lower gasoline prices.

The media considers one of these politicians to be brilliant and the other to be a buffoon.

I report. You decide.


"You will see gasoline come down below $2 a gallon again," "That will happen." " Drill, baby, drill!"
-Michele Bachmann explaining in 2011 that if she is President increased drilling and exploration will bring down the price of gas.

Yes we can, Mr. President.

And it was all accomplished in spite of your actions and views. 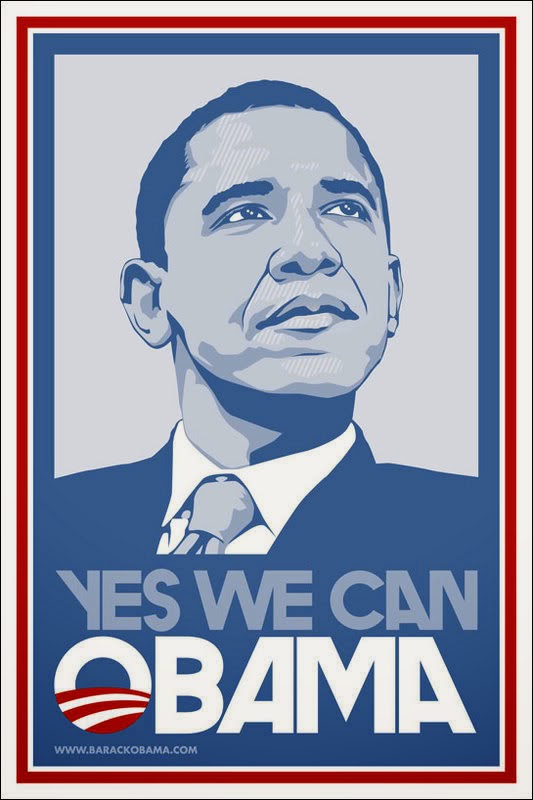 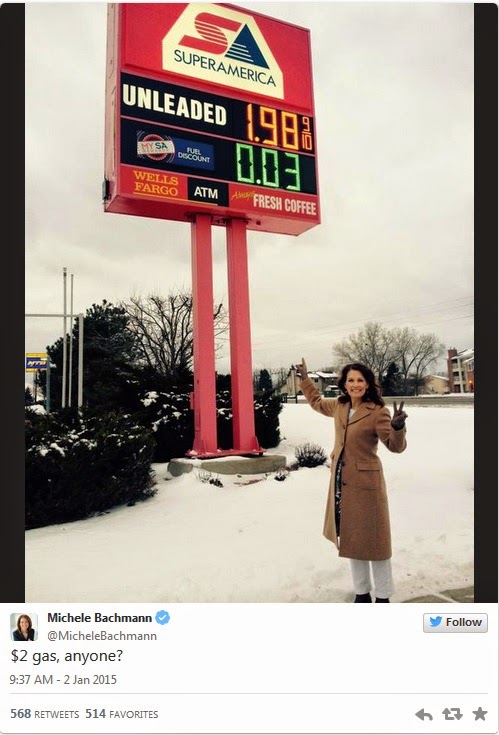