How do you know if someone is really smart?

The kind of person who is really exceptional and can make a true difference in this world.

The half of one percent of the human race- the very smartest- who have the ability to create real wealth through productivity enhancements that improve livings standards and our way of life.

I just finished reading Andy Kessler's book, "Eat People and Other Unapologetic Rules for Game-Changing Entrepreneurs", and he argues that finding exceptional people who can both see and lead the way to great things is absolutely critical to advance our economy and society. 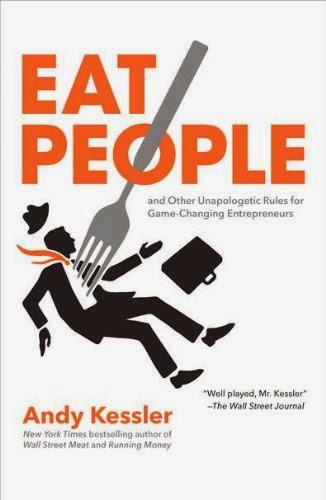 I wrote about Kessler and his ideas almost four years ago when his book first came out.  I read a review and summary of the book and was intrigued with his thinking. Let's just say that I am little behind in my reading.

Kessler's basic thesis is pretty simple.  Technology eats the jobs of people.  However, the economy is incredibly dynamic. History shows that labor-saving machines do not decrease overall jobs even when they make some jobs obsolete.  The new economic growth creates new jobs, raises the standard of living for everyone and the lost jobs ultimately are quickly forgotten-if the policy makers let it happen.

This is how he describes it in the introduction to his book.


There is only one definition of an economy I’ve ever been comfortable with: a system that increases the standard of living of its participants. Period. Everything else from credit to money supply to quarterly earnings releases to minimum wages is just a tool or else a meaningless characteristic of an economy.

Increasing standards of living doesn’t happen automatically. It’s not a gift from heaven. Someone has to invent the future.

I call them Free Radicals. We’ve seen them throughout history.


To invent the future you have to have someone who can understand, see and conceptualize things better than everyone else. Without that, we never break out of the status quo. We need the smart people who can see what others don't see and do what others can't do.

Kessler turned to Bill Raduchel, who has a Harvard PhD and was also on the faculty there, for his thoughts on the subject of "smart". After his stint in academia Raduchel was the CFO and CTO of Sun Microsystems in the 1990's and was also with America Online before its merger with Time Warner. Kessler observes that Raduchel has seen a fair share of smart people in his days between Cambridge and Silicon Valley so he asked for his perspective on what it means to be really smart.

Raduchel breaks down intelligence into four main parameters. Each of these characteristics are in each of us and they vary in degrees. There is a variability in all of them with all of us.

First, how fast do our brains work. How quick is someone on their feet? How quickly do they process information? Some people are brilliant but they don't reach conclusions quickly. Others are lightning fast. The comedian Dennis Miller comes to mind when I think fast thinkers. Most studies find a relatively narrow range on its clock speed---about three to one. This is called the Stroud number after a psychologist who focused his academic work on the processing rate of the brain.

Second, is the chunk recall factor. Human memory in the brain appears to be organized as linked lists of chunks of information. When we open these chunks or containers we seem to know everything in them. However, there seems to be a limit on how many chunks we can keep open at one time and recall the information. For most people that number is seven. That is why U.S. phone numbers were set at seven digits. Again, these is variability in the chunk recall factor that is fairly limited---between three on the low end and twelve on the high side.

Third, is the number of thought generators a person has in their brains. The human brain is great at evaluating but it generally needs to compare it to something it already knows. It is not good at evaluating in a vacuum. Therefore, the brain uses templates (prior thoughts) as anchors to compare new input. It then sends the new thought off to be evaluated as yes or no. The more thought generators in place and active, the better to evaluate properly. Again, we are talking a narrow range of two to ten with an average of five in the general population.

You can also see there is variability in brain power but it is not enormous from one person to the next in the first three characteristics. That is not the case with the fourth parameter.

The final factor, the size of the memory chunk, what is called the "Halstead length", is the biggest determinant in a smart person. This is how much is crammed into one of those chunks or containers that is open. As you get into complex issues and problems the only way to comprehend something effectively is for it to be all stored in a couple chunks--the fewer the better--because there are limits on our chunk recall (as discussed above).

"The longer the Halstead length, the greater the problem you can comprehend, the richer the data structure you can employ", observed Raduchel.

The average chunk size is a Halstead length of 250. In Silicon Valley terms, that is about fifty lines of software code. However, when this was studied by Maurice Halstead for which the "Halstead length" is named, he found that the very best programmers had lengths of over 60,000! There is a big difference between 250 and 60,000.

That variability is also immense when you consider that the other characteristics of intelligence between each of us only varies by a factor of three to five. The "Halstead length" can vary by a factor in the hundreds.

The fact is that some people have the ability to comprehend something incredibly complex because it is a 50,000 Halstead length problem and they have the brain power to handle up to 60,000. The average person has no chance at all to do the same if their "Halstead length" is a mere 250.

Those of us who are mere mortals can be invaluable in supporting the big ideas created by the very smart by working on the pieces of the big concept or idea. However, the productivity of the top one-half of one percent is critical as they are needed to develop the big thought--the design or concept--that can be implemented by others in smaller chunks. It is the only way it works.

The reality that everyone has different attributes and assets. We need different contributions from different people to be successful in our society.

Kessler puts it this way.


You see, we are not equal. Forget this way of thinking. Forget the politically correct tropes about the dangers of IQ tests and aptitude measuring. Some are smarter than others. If you went to high school, you know this. If you work at a company you know this. So quit trying to say we are all equal.


Now you have a better idea of what makes someone smart.

It is about chunks and lengths.

And you thought that size didn't matter?