What About All Of This Student Debt?

I attended an expensive law school 40 years ago.

When I graduated my initial starting salary was $14,000.

Coming right out of undergraduate school I had several offers at around $8,000 per year. The additional education I invested in over those three years produced a decent increase in annual income for my education investment. Within five years I had more than doubled my starting income as a young attorney and CPA. Between contributions from  my parents, income from summer jobs and support from my working wife, I left law school with no debt. My law school education has produced a great return on investment over the years.

Contrast that with where we are today.

According to this article, the entry level pay for the top firms in Atlanta (where I had my first job out of law school) is $135,000 today.  That is almost 10 times what I first earned. However, tuition is over 20 times what I paid to get my law degree.

The return on investment on education is declining.

However, despite this fact, more and more money is being borrowed to pay for higher education. It is simply not supported by the underlying fundamentals.

How have we allowed the cost of higher education to increase at multiples of the return on that investment in education?

I came across this interesting article in The American Spectator by Bill McMorris that traces a big part of the student loan problem to a Supreme Court case in 1971 that remains largely unknown. In that case, Griggs v. Duke Power Co., the Supreme Court ruled that jobs-based aptitude tests were potentially discriminatory as it could cause "disparate impact" when used by employers to assess and predict the performance of workers for promotion and advancement.

After World War II aptitude tests gained favor after their wide use in processing hundreds of thousands of recruits into the right roles in the War effort. For example, my father was only a high school graduate at the beginning of World War II but he was assessed with high intelligence and trained as a cryptographer. He told me that he was one of the cryptographers who passed the top secret message to drop the atomic bomb.

Industry used the tests after the War to determine who would rise through the ranks based on whether someone had the aptitude to succeed rather than simply focusing on a college degree.  After all, only about one in eight returning people from the War went on to college anyway.

McMorris explains the impact of that decision on our society and, ultimately, on student loan debt.

The Griggs decision has made that organic rise through the ranks impossible, as disparate impact left businesses liable for those who failed to pass hiring tests.

“Most legitimate job selection practices, including those that predict productivity better than alternatives, will routinely trigger liability under the current rule,” Wax wrote in a 2011 paper titled “Disparate Impact Realism.”

The solution for businesses post-Griggs was obvious: outsource screening to colleges, which are allowed to weed out poor candidates based on test scores. The bachelor’s degree, previously reserved for academics, doctors, and lawyers, became the de facto credential required for any white-collar job.


After the Griggs decision, the colleges effectively had a nice gig as the golden ticket to the "good life". They were effectively the route you had to travel to get ahead.

Colleges, aware of their newfound utility and the easy money pouring in from student loans and Pell grants, jacked up prices. Education costs, as George F. Will has noted, grew 440 percent in the post-Griggs era. That trend continues today. The Project on Student Debt found that total college loans increased 6 percent annually between 2008 and 2012. The average student today takes out nearly $30,000 in debt to buy a ticket to the good life. They’d be better off taking that money and buying a new Mercedes CLA and faking the good life.

Cnsnews.com reports that the aggregate balance in the federal direct student loan program rose by $119.4 billion in the last year. The balance on all student loans, including those from private sources, is now over $1.2 trillion. Here is a debt clock that gives you an up to the minute total of student loan debt.

This chart shows the growth in student loans held by the federal government. This is the money that young Americans (and their parents who may have co-signed the loans) owe the U.S. Treasury. 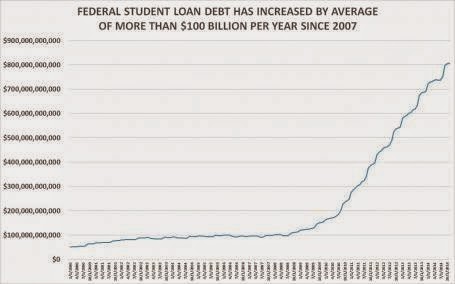 This is money that is also not dischargeable in bankruptcy. That is the reason that a staggering 156,000 people who are receiving Social Security benefits are now having these benefits garnished to pay for student loan debt.

Do you think the federal government has more than a little leverage on these Americans going forward?

College costs could not go up without a supply of money to pay for it. Just as is the case with health care costs, college costs have become heavily dependent on the flow of federal money into the system.

Health care costs generally tracked overall inflation in the economy until Medicare and Medicaid were introduced and normal market forces were disrupted beginning in the mid-1960's.  The same has been true with student loan money.  As more student loan funds became available, the easier it became for colleges to raise tuition costs.  Ironically, a program that was designed to assist students to afford college seems to be making it more unaffordable with each passing year.

Such is what occurs over and over when a well-intentioned "liberal" idea meets the real world.  A desire to do good by government ends up being the undoing of the very people it was intended to help.

The President's 2015 budget estimates that approximately 20% of all student loans will go into default over their lifetime. Most lenders would go bankrupt with that type of default rate.

However, Jason Delisle of The Wall Street Journal points out in "The Hidden Student Debt Bomb" the increasing number of loans in forebearance (where borrowers are allowed an extension of time to begin making payments) is a ticking time bomb warning that long term defaults may end up much, much larger over time than is currently estimated.

It is time to re-evaluate how we measure the performance of student-loan programs—particularly whether borrowers are or are not meeting their obligations. The traditional measures of nonrepayment—delinquencies and defaults—might be fine for most types of loans, but not for outstanding student loans, nearly all of which are held or backed by the federal government. Lawmakers have provided students with options that let them punt on repayment without triggering delinquency or default. Lately, students have been availing themselves of those options at rising levels.

If student-loan defaults exhibited that kind of growth it would make national headlines. Forbearance growth goes unmentioned, yet it looks a lot like a default given that the borrower isn’t making payments.


What about all of this student loan debt?

Who is going to pay it all?

We can only hope all those young adults living in their parents' basement are saving their money!