Americans are generally in favor of more federal spending on infrastructure.

- 79% of Americans supported a government overhaul of American roadways, railroads, bridges, and ports.

- 71% supported a plan to extend high-speed internet to all Americans.

- 68% supported an initiative to replace every lead pipe in the country.

However, when asked if they supported the recent $2.3 trillion infrastructure and jobs bill proposed by the Biden administration, only 45% expressed support.

It might be a sign that voters are already leery of the big spending habits of the Democrats and distrust that the $2.3 trillion is really going to be spent on infrastructure.

If that is the reason, the voters seem to be very smart.

The reality is that just 6% of the total spending goes for spending on roads and bridges which most people think about when infrastructure is mentioned (see poll survey above).

Only $115 billion is allocated for roads and bridges in the bill but $213 billion is going to be spent on retrofitting homes and businesses to make them "greener".  $174 billion is allocated towards forcing Americans out of gasoline-powered vehicles and into Green New Deal electric vehicles and building electric fast charging stations around the country. Of course, those vehicles will still rely on electricity that comes primarily from fossil fuel power plants.

I have written before of the utter lunacy of believing that we are going to replace the generating power of our electric grid with green energy anytime soon to power all of these electric vehicles.

I also don't think that the federal government needed to incentivize Americans to trade in their horses for horseless carriages in the early 20th Century and they certainly did not build gas stations to fuel them. Why is this now considered a function of government and why is it considered infrastructure?

It's another example of the Democrat playbook. Push a lot of far left spending proposals into a bill that is supposed to be about something else and put a name on it that will mislead the public. Of course, the mainstream media will just push the narrative along without any type of scrutiny.

This graphic from The Washington Post outlines where the spending is supposed to go. 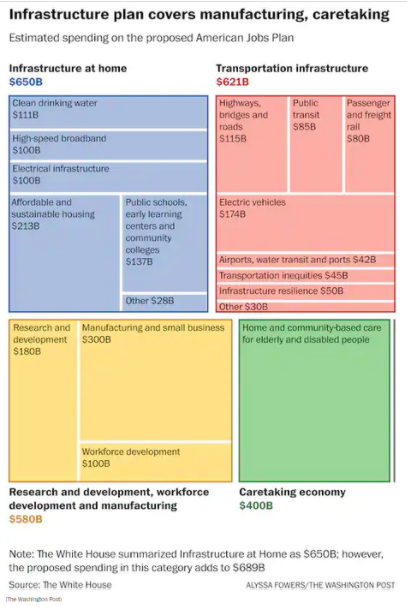 Notice that $45 billion of the proposed spending is to be spent on "transportation inequities".

Some of this money is allocated to tear up or reroute interstate highways in the name of "advancing racial equity and environmental justice". This is because these highways pass through Black neighborhoods.

“The President’s plan includes $20 billion for a new program that will reconnect neighborhoods cut off by historic investments and ensure new projects increase opportunity, advance racial equity and environmental justice, and promote affordable access,” a fact sheet from the White House read.

Two examples were cited in the fact sheet accompanying the legislative proposal.

“Too often, past transportation investments divided communities — like the Claiborne Expressway in New Orleans or I-81 in Syracuse — or it left out the people most in need of affordable transportation options.”

I guess this means that there are no interstates that pass through and divide white communities.

I also find it incredible that the bill would allocate almost 20% ($400 billion) of the total for what is called a "Caretaking Economy" which includes spending on home and community-based care for elderly and disabled people".

This might be worthwhile to do but how is that considered "infrastructure"?

Infrastructure spending funding by government would generally be analogous to capital spending by a private business. A capital investment is made up front with the expectation that it will produce a return on the investment in future years.

How does the Biden infrastructure bill measure up on this score?

The PennWharton Budget Model of the University of Pennsylvania modeled the effects that the Biden bill would have on the U.S. economy.

Interestingly, rather than the infrastructure bill providing a boost to the economy it actually would reduce GDP over the long term.

Here are the projections from the PennWharton model on the spending provisions in the proposed legislation.

Not only does the "investment" spending not pay for itself long term it substantially increases government debt as a result. This additional debt would also crowd out private investment (capital stock) in the economy.

In order to counter this, Biden is arguing that the bill must be pay for itself with tax increases on corporations and the "wealthy". However, even the proposed tax increases only "pay for" about 60% of the increased spending.

However, the PennWharton model shows that the tax increases are particularly damaging for the economy although it does improve the government debt situation modestly in the long term.

When you look at the total effects of the bill (spending and tax increases) the economic effects look like this in the PennWharton model.

Capital stock is reduced by 3%.

Government debt is increased over the next 10 years before seeing some reductions in 20-30 years.

There are modest productivity benefits.

It kind of makes you wonder how this can be called an Infrastructure or Jobs bill.

It all makes you wonder how this is going to make America better.

It doesn't make much sense which we can say about many things that are occurring right now.

However, redefining infrastructure to mean any spending that the liberal left wants is something else.

Why not just be honest with the American people?

I think we all know the answer to that question.