Theater of the Absurd

To me, it was a theater of the absurd.

Start with the fact that Nancy Pelosi only allowed 200 people into the House chamber to view the speech in a room that holds 1,600 individuals.

Social distance was in full effect even though every person in attendance was required to be fully vaccinated against Covid in order to attend.

This Congressman shared his experience when he arrived for the speech. 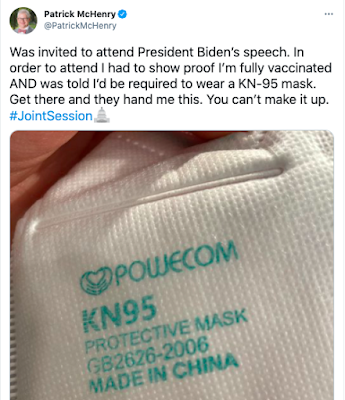 Looking at the television audience for Biden's speech it is also hard to see how this man garnered more votes for President than anyone in history.

Overnight ratings of the major networks show that 11.6 million viewers tuned into the speech. This total does not include cable outlets so the final number will undoubtedly be higher.

However, compare that number with the ratings for Trump's State of the Union speeches.

Looking at the numbers it appears that a good portion of the American people chose to be socially distanced from the tv speech. We still don't know how many were double-masked of those who watched.
A CBS poll claimed that 85% of TV viewers approved of the speech. However, only 18% of those surveyed for the poll were Republicans. That sounds like CBS found it very hard to find many Republicans who bothered to watch the speech.
What I have found most absurd about Biden's administration thus far is the fact that he acts as if he and the Democrats were elected with an overwhelming mandate to remake America.
Let it not be forgotten that but for 50,000 votes in three states (Arizona, Georgia and Wisconsin) Joe Biden would have been in Delaware last night.
The Joint Session of Congress that Biden addressed last night also has the slimmest majority margins (50-50 in Senate and 218-212 in House) in decades.
This is hardly the environment in which anyone should be trying to remake America.
In fact, Rich Lowry calls Biden "downright delusional" to think that he can revolutionize America with the slim majority he has.
For context, when FDR came into office in 1933 and immediately began introducing legislation to implement his "New Deal" he had a Democrat majority in the Senate of 58-38 and almost 200 seats in the House (313-117) after the Democrats won almost 100 seats in the 1932 election. By contrast, House Democrats LOST 12 seats in the 2020 Congressional election.
We are a long way from any mandate or consensus on major policy changes based on the numbers.
However, for Biden and the Democrats, their current slippery grip on power means that they are going to attempt to pass every liberal, left-wing idea that was ever put on someone's wish list. All they know or care about is power. And they can only yield power by buying it. They clearly understand that.
I am having a hard time just keeping up on what the Democrats want to spend.
They already passed and signed into law a "Covid relief bill" of $1.9 trillion which was in addition to $4.4 trillion in Covid relief measures passed in 2020. If you are keeping track, that is $6.3 trillion in spending related to Covid in one year.
Only $400 billion of that $1.9 trillion went for the $1,400 individual stimulus checks that most people received in March. Most of the remaining $1.5 trillion went to bail-out Democrat cities and states from fiscal issues that pre-dated Covid and other payments that would benefit Democrat constituencies.
In his speech, Biden also was promoting his "America's Job Plan" which is his infrastructure plan that hardly spends any money on those things that most people consider as infrastructure (roads, bridges, etc). Nevertheless, Biden proposes to spend $2.3 trillion on another long Democrat wish list of "progressive" ways to make America better.
$4.2 trillion was not enough money to get all the spending the Democrats want so in his speech Biden also promoted what he is calling the  "American Families Plan" where he calls for an additional $1.8 trillion in new federal spending.
$6.0 trillion in new spending in these three proposals alone.
Let's put that amount of spending in perspective.
In the year before Covid-19 hit, we only collected $3.5 trillion in total federal revenues.
We spent $1.3 trillion on federal discretionary spending.
We spent a grand total of $676 billion on defense in 2019.
Let's put that in further perspective.
FDR's New Deal cost in 1933 was $47.1 billion. In today's dollars that would be equal to a cost of about $1 trillion. Biden's spending proposals are equal to six New Deals!
Biden says that he is not going to add to the deficit with his "Jobs" or "Families" plan and is going to get the money from taxing corporations and "the rich".
That idea alone is absurd.
Biden is proposing $4.1 trillion in new spending in those two proposals alone over the next 10 years.
All of the Trump tax cuts totaled $1.9 trillion in net costs over 10 years and the majority of those cuts went to the middle class. That total also did not include feedback benefits resulting from increased economic activity as a result of the tax cuts.
It is absurd to suggest that this spending is not going to increase the budget deficit.
All of it is theater. And it is absurd.
Every day I think the theater and the absurdity will abate and every day I am wrong.
A few other recent examples.
Fully vaccinated Biden walking among the tombstones at Arlington National Cemetery.
Was he protecting these fallen heroes or was he concerned the tombstones were unmasked? 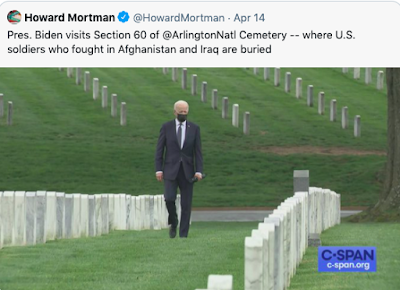 Fully vaccinated Biden the only leader at the recent virtual Global Climate Summit wearing a mask. 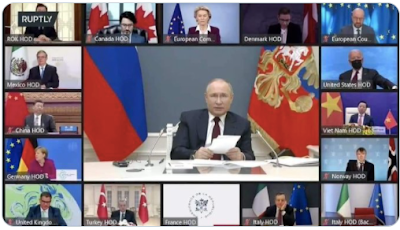 I am sure that this absurd theater will also do much to bridge our divide with Islamic countries around the world.
We entered the Theater of the Absurd on January 20, 2021.
We are 100 days into the production.
It is not too hard to predict how this show and performance is going to end.
All I am interested in is finding the Exit doors. 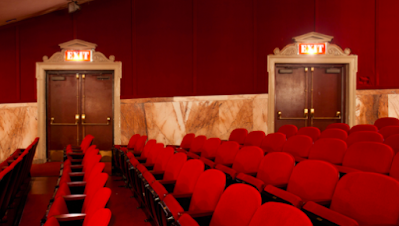