Will We Ever Focus on Causes Rather Than Consequences?

New data on births to unmarried women in the United States has just been released for 2019 by the National Center for Health Statistics.

In total, 40% of all births in the United States were to unmarried women in 2019.

Mississippi (54.9%) and Louisiana (54.0%) are the states with the most births to unmarried women.

This chart breaks down the births to unmarried women by race. 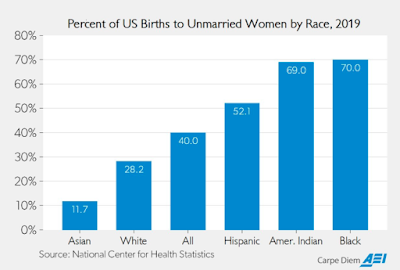 Many people look at these numbers and argue that poverty is the root cause of the disparities in the percent of births to unmarried women by race.

However, until the 1950's black children were more likely to live with two parents than were white children.

Right before the passage of the War on Poverty legislation in 1964, 78% of black children lived with two married parents. That number is only 36% today according to the most recent Census Bureau statistic.

Poverty is a factor in women having children outside of marriage. However, it is much more certain that it will result in poverty for the mother and child than it being the primary cause for these out of wedlock births.

If we had the same number of black children living with two parents as we did in the 1950's you have to wonder what the overall black poverty rate would be?

In the 1960's, as we declared a "War on Poverty", did we actually sow the seeds of breaking up the black family? You have to ask what caused the out of wedlock rate for black children to rise from 22% to 70%?

If you look at it logically it should have declined with the introduction of oral contraceptives not to mention the legalization of abortion by the U.S. Supreme Court in the 1970's.

Another graph that I think is interesting is this one that shows that the United States has a higher percentage of children living in single-parent homes than any other country in the world.

The percentage of children in single-parent homes in China is 3%.

If this is a poverty issue why are the numbers that low in those countries who have poverty that is unimaginable in the United States?

You have to ask whether the consequences of unwed black mothers are actually being caused by our well meaning policies in the United States?

In the 1950's an illegitimate child was a problem for the immediate family of the unwed mother. It resulted in the single mother being totally dependent on her family to assist her. That is undoubtedly true as well in Nigeria and India.

One interesting factoid I came across in the 2019 birth data is that a 17 year-old had her 8th child during the year. She was Black. In addition, two 19 year-olds had their 8th child. Those mothers were White.

If we are to make any progress in lowering the poverty rate for children, a key focus has to be on seeing more children living with two parents and fewer in homes with single mothers. It is clearly more efficient economically when two parents can bring the potential for two incomes and can also share the costs of one household. This is true even without considering the emotional and psychological benefits for children in two-parent households.

If we want to make real progress on reducing poverty we need to start dealing with the causes rather than just spending money on the consequences.

I was disappointed with the Presidency of Barack Obama on many levels. However, there is nothing that was more disappointing than Obama's total failure to address this issue as President.

Obama had a unique opportunity to address this problem. He could have made a real difference. He could have spoken forcefully and consistently about the causes. Instead, his policies actually made the problem worse.

There is nothing that indicates it will be any different in the Biden/Harris administration.

We will likely continue to deal with the consequences rather than the causes of this problem for many more years. Political correctness guarantees it. No one wants to talk about the causes. Therefore, the cycle of poverty and its consequences will persist.

Many speeches will be made. Billions of dollars will be spent. It will all be about the consequences.

When is someone of consequence in the Democrat party going to start talking about the causes?