We have reached the point where the Covid vaccines are going to be offered to anyone that wants one sometime in April in most states.

Interestingly, when President Trump suggested that this was his plan last September  "experts" said that was not likely. 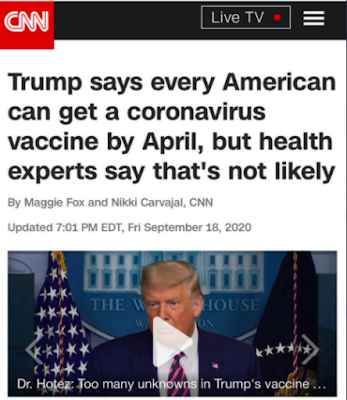 Older Americans, health care workers and vulnerable groups in most states have had the opportunity to be vaccinated.

For example, 75% of the age 65+ population in the United States have received at least one dose of the vaccine. 55% have received their full doses.

This is the age distribution of those receiving at least one dose of the Covid vaccines through March 31 by age group. 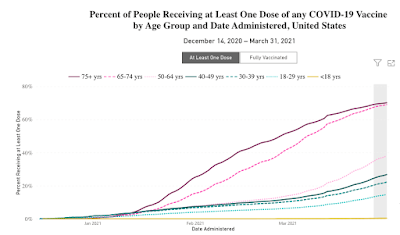 I am going to be interested to see what percentage of those remaining are going to get the vaccine.

The survey below indicates that there is a great deal of vaccine hesitancy from those who have not yet gotten the vaccine.

Only 47% of Americans indicate they would get the vaccine if it was made available to them this week. 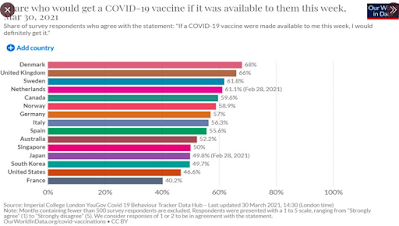 The reality is that countries such as Australia, Japan, South Korea, Canada and Germany actually appear to have much more vaccine hesitancy in that so few have already had the vaccine but they still have large numbers who state they would not take it now if it was available.

Most of those in the United States who indicate they might not take the vaccine are obviously in younger age groups since a large majority of older Americans have already had the jab.

My guess is that 30%-40% of those who have not yet been vaccinated will choose to not take it.

There are good reasons why those sitting on the sidelines right now might not want to take a vaccine that has not yet been approved for use in the United States and is being dispensed only under an emergency use authorization.

This is the most recent graph I could find showing the mortality risk from Covid by age.

The mortality risk for those age 50 and under is extraordinarily low. In my view, it is hard to see the benefits outweighing the risks in taking the vaccine right now for anyone under the age of 50 unless they are a health care worker.

Here is the most recent summary from VAERS which is the website in which adverse events can be reported from the Covid vaccines.

What I have found most troubling in the data is the high number of adverse events in those under the age of 50 even though far fewer have taken the vaccine in these age groups and the risks from Covid are far less.

For example, here is the breakdown of ER/urgent care visits from the vaccine. Notice how heavily skewed the adverse events are for those under age 50.

These may all be unfortunate coincidences. VAERS is an open site and that may be the case. Then again, someone took the time to report an event because they thought the timing of the adverse event was suspicious in relationship to someone taking a vaccine.

Draw your own conclusions.

The risks from Covid for those over age 70 increases significantly and the risk/benefit profile tilts more favorably for those who might want to consider the vaccine.

However, the fact also remains that these vaccines have not been approved by the FDA. They have only been authorized under an emergency authorization and are effectively still in experimental trials despite what you might hear in the media.

Under the best of circumstances, they will not be approved by the FDA for another two years.

For example, here is an excerpt from the FDA fact sheet for the Moderna vaccine. Similar language can be found with the Pfizer and J&J vaccines.

In other words, whether you know it or not, you are effectively in a clinical trial of the vaccine when you take it right now.

The younger someone is the more they probably need to be concerned about any unknown longer term side effects of the vaccines since the accelerated preliminary clinical trials had no way of investigating these possible effects.

Considering the risks of Covid are practically zero for children (the chances of dying in an accident are almost 50x* more likely), and longer-term side effects of the vaccine are unknown, in my view there is no justification whatsoever for vaccinating this population.

(*-According to the CDC, there have been 246 deaths of children age 0-17 from Covid in the last 15 months. On average, CDC reports that on average 12,175 children 0 to 19 years of age die each year in the United States from an unintentional injury.)

I believe the same holds true for anyone who has had Covid. When in human history has it ever been recommended that someone who had a disease should then be vaccinated against it? It defies logic to subject someone to the risks of an unapproved, emergency use vaccine with unknown longer-term side effects when they already have natural antibodies.

For example, Israel, which leads the world in vaccinating its population, as a matter of policy is not vaccinating anyone who was previously infected with the Covid virus. The risk is deemed to outweigh any benefit.

One of the more interesting Covid surveys I have seen recently is from Gallup which asked people how much they had done in public in the last seven days sorted by vaccination status.

It is most remarkable that over half of those fully vaccinated are still avoiding going to public places and almost 2/3 are avoiding travel.

On the other hand, those that do not plan to be vaccinated are largely carrying on with their lives. These people have also likely done the same for much of the last year.

It is difficult to criticize those who have been vaccinated but are still cautious about returning to any sense of normalcy. Consider the messaging out of the CDC. These messages have all come from the CDC in the past seven days. 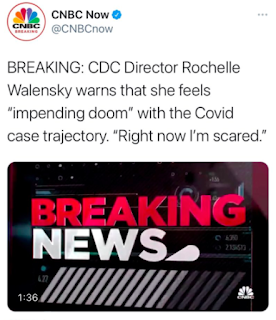 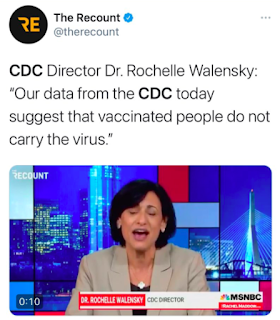 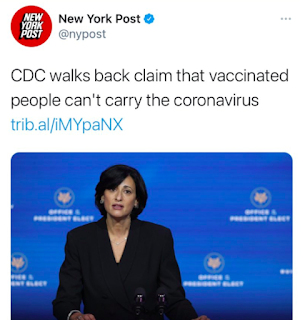 The two messages below came out within three hours of each other on Friday (April 2) in which the CDC stated people fully vaccinated can travel without serious risk. Three hours later the CDC Director said people should not travel despite the new guidance. 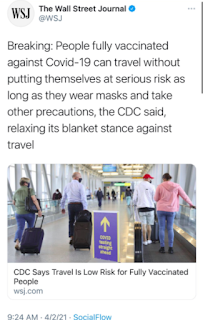 I don't know that I have ever seen worse messaging in my entire life.

Bear in mind that these are the same people who are telling everyone to get the vaccine as soon as it is available to them.

At the same time, who is to say that those people who are carrying on with their lives with no intention of getting vaccinated are not smarter than all the experts considering the track record of those "experts" over the last year?

There are good reasons for those who might have hesitation about the need for these vaccinations as outlined in the facts above above.

I would also advise everyone to be aware of your natural tendency to defer to authority. The authorities may not be right. In addition, beware of following the herd. They may be heading in the wrong direction.

The Biden administration recently announced plans to spend $1.5 billion on a public relations campaign to convince people to take the vaccine. You can be expected to hear plenty of reasons why you should be vaccinated. You are unlikely to hear little about why you might want to decline or defer the opportunity right now.

That seems to be an awful lot of money to spend on something that you would think should require no persuasion if there was a basic belief it was necessary and carried no risk in the first place.

As always, due your own research and trust your own instincts. No one will ever be as concerned about your self-interest as YOU will be.