Will Anyone Be Held Accountable?

It was exactly one year ago that "15 days to slow the spread" was supposed to end.

It was also one year ago that I began to seriously doubt what we were being told and whether the cure being advocated might be worse than the disease.

What drove me over the edge were projections that Ohio's Governor and Public Health Director were using to justify the extension of the severe lockdown and school closures at that time. Mind you, at that time they weren't even telling people to wear face masks. They were telling people to not wear masks. A mask mandate would not be imposed in Ohio until mid-July.

Here is a graph of one of the models that these officials were relying on at that time. I published this originally in my blog post "Models and Reality" on March 29, 2020.

It was projecting that 100,000 Ohioans would be in the hospital by the middle of May if we used a shelter in place policy for the next 3 months. 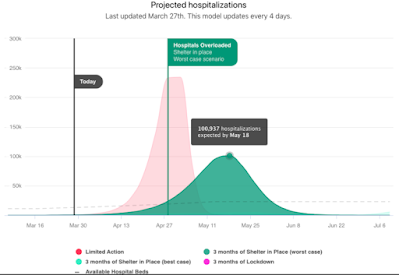 The state's public health director, Dr. Amy Acton, stated that she was expecting 10,000 new cases each day at the peak in May and this was with the current Covid policies in place until then.

The same model that projected 100,000 hospitalizations by mid-May forecast 174,000 deaths from the Covid pandemic of Ohio's nearly 12 million people.

I wrote at that time that none of this passed the smell test for me. The data I was seeing thus far simply did not fit the narrative.

One of the data points that did not make sense was how cases could be surging in those 15 days when almost everything was locked down. At that time I could walk to a normally busy thoroughfare near my house and not see one car.

It made no sense until the facts came out shortly after that showing 70% of the new cases were coming from nursing homes and prisons. Could it have been more ironic that both of these places were effectively locked down even before the pandemic began?

A year later how accurate were those models?

We were told we were facing 100,000 people in hospitals at one time.

Over a year into the pandemic there have been 53,076 hospitalizations in Ohio IN TOTAL.

As of today, there are 978 people hospitalized in Ohio with Covid. That is 3.5% of total bed capacity

There have been 18,609 reported deaths thus far.

39% of the deaths are specifically related to those living in long-term care facilities.

The numbers nationally are similar.

What have all of the lockdowns, school closures and government interventions cost?

That number is incalculable.

For example, try to put a cost on the mental health implications of our response to the Covid-19 pandemic. 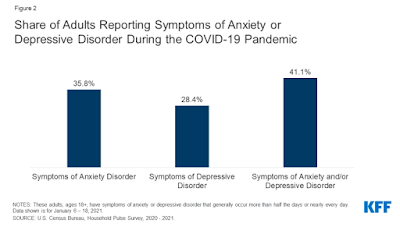 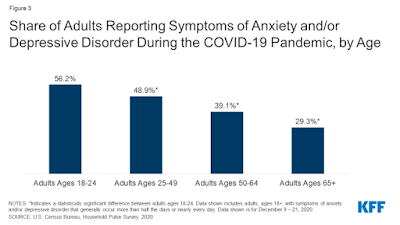 There is evidence to suggest the mental health implications have been even more severe for teenagers according to this article in Healthline.

This data from the CDC on all-cause deaths is particularly concerning as we know Covid was not the cause of a spike in deaths for teenagers last year. Full details are not yet available for specific causes of death for 2020 but suicide has typically been the second leading cause of death for this age group behind accidents.

These are the total Covid deaths for ages 0-19 since 1/1/20 according to CDC data. Those excess deaths for teenagers did not come from Covid.

The costs that the federal government has expended in the Covid-19 response are known.

To date, $6.1 trillion has been appropriated over the last year by the federal government in Covid relief.

Let's put that $6.1 trillion in context.

It cost $4.1 trillion (in today's dollars) to defeat Germany and Japan in World War II according to this article from Moneywise.

America's final bill for the fighting in the Pacific and Europe was massive. In today's dollars, World War II cost $4.1 trillion, according to data from the Congressional Research Service.

That's about equal to the value of either of today's two largest companies — Apple or Amazon — four times over.

How does that compare to the cost of modern wars? A Pentagon report says the U.S. has spent "only" $1.5 trillion on America's longest war, the war in Afghanistan, plus related anti-terror campaigns in Iraq and Syria.

Let that sink in.

We have already spent 50% more "fighting" Covid than we spent in winning a World War.

Should we have taken Covid seriously when we first saw the reports coming out of Wuhan, China?

Absolutely. I wrote about that early in these pages.

However, by this time last year it was becoming clear to anyone looking honestly at the data that the cure that was being proposed was much worse than the disease.

The costs of that cure are going to be with us with for a very long time.

The costs might also turn out to be much higher than we could ever imagine when everything is considered in the fullness of time.

Will anyone be held accountable for the poor projections, misinformation, incitement of fear and poor decision making?

Will anyone hold China responsible for their role in this? Whether the virus escaped from the lab in Wuhan or the Chinese merely covered up the early spread of the virus, the CCP bears a great deal of responsibility for what has transpired.

Will anyone hold Dr. Fauci or the CDC accountable for a string of bad decisions and poor advice to policy makers?

Will anyone hold the many Governors who put politics ahead of data and science?

Will anyone hold the many teacher's unions around the country who have sacrificed the children they are supposed to serve ?

Will anyone hold the mainstream and social media companies who have been more interested in promoting a narrative and censoring alternative viewpoints than objectively reporting facts and data that could have allowed all of this to be viewed in perspective?

A month ago Joe Biden called out Governors in states such as Texas, Mississippi and Florida by accusing them of "neanderthal thinking".

President Biden criticized states such as Texas and Mississippi for lifting Covid-19 restrictions, saying that we are on the cusp of being able to change the nature of the disease and that "the last thing we need is Neanderthal thinking."

A month later what do the daily case numbers look like in Texas and Mississippi compared to mask mandate and lockdown states like Michigan, New York and New Jersey.

Perhaps Biden will be proven right in the end. However, if he is not, will he be held accountable?

Perhaps Biden's CDC Director will be right when she says she has a feeling of "impending doom" that we are on the verge of another Covid surge.

If that is the case, it would certainly not say much about her confidence in the Covid vaccines, the favorable seasonality trends we should soon see or any additional benefits from natural herd immunity.

In the ironies of all ironies category (or is it?), the CDC states that one of the signs that a person is having an allergic reaction to one of the mRNA Covid vaccine is a "feeling of impending doom".

When I first saw this referenced I thought it was satire. It is not. 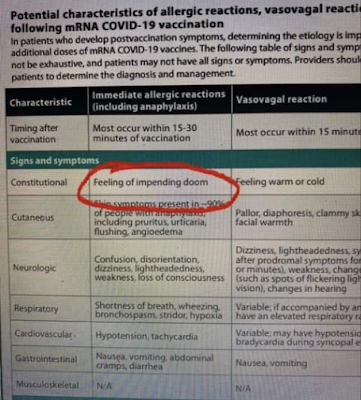 I guess we can safely assume that CDC Director Dr. Rochelle Walensky has been vaccinated.

What else do I know?

I do know what the recent trends have been.

This graph shows the national trends as well as what is going on in the so-called "science" states and the "neanderthal" states.

If you were an alien dropped in from Mars which states seem to have a better handle on the situation right now?

New cases nationally have increased some in the last two weeks driven by states like Michigan, New York and New Jersey but they are still down by 2/3 since January. Deaths are down 23% over the last 14 days across the nation. They are down 70% since the peak in mid-January.

The observations I make in BeeLine are driven by the data I see in front of me.

That data may change and it may lead me in another direction.

I have misjudged a number of things over the last year. However, I never came close to being as far off as those "experts" who were modeling the impacts of Covid a year ago.

I expect my readers to hold me accountable if I give them bad data or conclusions from that data. At the same time, if I lead anyone astray there is not much damage I can do with the limited reach of this blog.

The same can't be said about the others I have referred to above. The decisions and judgments they make affect the lives, livelihoods and futures of millions of people.

Will any of them be held accountable for anything they have done or might still do in all of this?

Based on what I have seen in the last year, I am not optimistic.