The Influence of Authority

We are trained from birth to listen and defer to authority. As a result, we believe that obedience to authority is correct behavior and disobedience is wrong.

As human beings we generally have a deep-seated sense of duty to authority. Parents, teachers, coaches, the police, bosses at work, doctors and elected officials are just some of the authorities we have been taught to listen to and show obedience to.

Authority is one of the six key principles that have been identified as having the most effect in influencing someone else's behavior according to Dr. Robert Cialdini who has spent most of his life studying influence and persuasion.

This is his best selling book on the subject which I highly recommend. 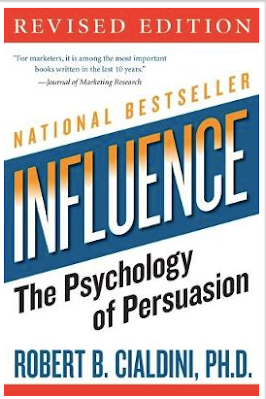 The pull of authority is so strong that mere dress is sometimes all that it takes to influence someone.

For example, in one of Cialdini's experiments he had a person dressed up like a police officer and go up to people on the street and tell them to put a quarter in an expiring parking meter of a random car. Most did just as they were told because he seemed to be a police officer telling them to do so. They wanted to be obedient. When the same person made the same request in ordinary clothing no one was willing to put their quarter in someone else's parking meter.

Cialdini also did experiments with jaywalkers. He found that people were more likely to follow a jaywalker across the street if they were "dressed for success" with a suit, tie and briefcase than if the jaywalker was in jeans and a t-shirt. It was as if people felt they could trust the person who looked to be more of an "authority" even if it had nothing to do with the decision to cross a crowded street against the traffic light.

Several years ago I was recounting this research on the influence of authority to a friend who had been invited to spend a day at a hospital as part of an outreach program. My friend was given a doctor's lab coat and made rounds with a doctor during the day. He said he understood exactly what I was saying as during the day he had several women pull down their gowns to show various parts of their anatomy that they would have never done if he had been standing there without the lab coat on. He marveled at how that piece of clothing changed everything.

In that authority has such a strong influence on us Cialdini warns that we must be careful to not to be unduly influenced by it. Cialdini suggests that everyone needs to look beyond the title, status, position or trappings of the authority and determine if the person is really an "expert" with knowledge. Second, even if the authority appears to have the knowledge can you rely on their trustworthiness?

I can think of no better example of where the authority principle of influence has come into play than it has in our response to Covid over the last year.

Authority has been used to influence people's behavior to degrees than most would have thought inconceivable a year ago.

That authority has dictated new norms of behavior that almost everyone has been obedient to.

People were obedient. After all, the "experts" told us what to do and they were the "authorities".

Who am I to question Dr. Fauci in his white lab coat or the state's public health director, the governor or the President of the United States?

However, as we sit here today, were they really "experts" when it came to this? Did they really have the knowledge and the decision skills to be trustworthy?

Did they have their own agenda? Were there other motivations at play?

It was exactly one year ago today that President Trump followed the recommendation of Dr. Fauci and other public health experts and declared a National Emergency in response to the Coronavirus and announced a 15 day program to "slow the spread".

What was the first item on the list of recommendations that were announced by the White House on that day a year ago?

"Listen to and follow the direction of your state and local authorities."

Did these authorities really know what they were doing? Were they trustworthy looking back from our perspective today one year later?

Those same experts and authorities are now aggressively promoting a vaccination program to slow the spread.

We are told that the vaccines are safe.

We are told that the vaccines are 95% effective.

However, is that really the case?

Do they really know? Do you really know if that is trustworthy advice?

I hope it is. However, I don't know that it is at this point. Despite what they tell you, the authorities don't truly know either. There is no way they could know right now. These vaccines have just not gone through the testing and trials that are normally done.

The drop in new confirmed cases and the percent testing positive for Covid today is very encouraging.

However, is this the result of the vaccines or is it a natural event resulting from increasing herd immunity in the population that is not related to the vaccine program?

Mind you, this is in a nation of 330 million people where somewhere around 1.5 million Covid tests were administered yesterday.

Under normal circumstances, a number like this would not even be a blip on a radar screen of illness when 330 million people are involved.

The daily Covid positivity 7-day average percentage has dropped below 5.0%.

This is near the low point it has been over the last year.

Most experts do not believe that the vaccine program could be primarily responsible for the huge drop in cases. More than 50% of the vaccine doses thus far have gone to those age 65+. People in these ages only represent about 16% of the total population, 15% of the cases and 81% of the deaths. 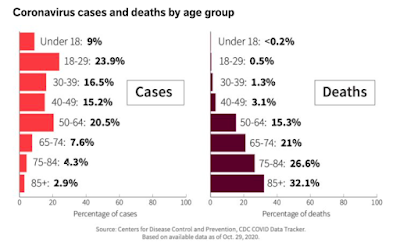 It has also been found in a study in Science that was published in February that the majority of Covid-19 infections and subsequent transmission originates in age group 20-49.

At this point, less than 10% of the people in this age group have received any doses of the vaccine. Almost no one under the age of 20 has received any vaccine.

Therefore, the vaccines may now be preventing serious illness and deaths in the age 65+ group but it is difficult to argue that the vaccines have had any effect in the dramatic decrease in cases over the last two months.

We will soon see the authorities making a major push to convince those under the age of 65 to be vaccinated.

I have written in these pages before that I believe that a risk/benefit analysis could be made that it is worthwhile for those age 65+ to take the vaccine.

I have not yet been convinced personally that the risk is worth the benefit at this point looking at the available data. I am looking for more information and data understanding that we are not dealing with an APPROVED vaccine at this time. We are still dealing with what is really a fourth stage clinical trial under an emergency authorization despite what you are being led to believe by the AUTHORITIES.

This includes Facebook which is putting this notice on any claim about the vaccine which is not consistent with what the AUTHORITIES are telling you.

One, not one Covid-19 vaccine has been approved. They are being used under an emergency use authorization (EUA).

Second, they have not been tested extensively for safety and effectiveness to any degree comparable with normal drugs and vaccines due to the accelerated testing and trial periods. The fact is no one knows what the long-term effects are of these vaccines. They may be safe and effective but you just cannot state that categorically right now.

All of this is stated in the EUA's for the Covid vaccines which are explicit that each is “an investigational vaccine not licensed for any indication” and require that all “promotional material relating to the Covid-19 Vaccine clearly and conspicuously … state that this product has not been approved or licensed by the FDA, but has been authorized for emergency use by FDA” (emphasis added).

Further, it is expected to be at least two years before the FDA has received adequate data to establish if these vaccines are safe and effective enough for the FDA to license.

This is why I have significant reservations about anyone under the age of 50 taking these vaccines at this point. Considering the data and facts, they have very small risks of severe illness and death from Covid. However, if there are long-term adverse effects, they would have to deal with those effects for the longest period of time. There is no way I see that risk/benefit analysis favoring a decision to take the vaccine in most cases for those under age 50.

If it was clear that these "vaccines" actually stopped transmission you could possibly argue that public health considerations would dictate that those between age 20-49 should be vaccinated because they are the largest age vector for transmission. However, at this point the experts do not believe that the vaccines inhibit transmission. That is why they state that even vaccinated people have to continue to wear masks. This clearly fails the most basic definition of what a vaccine is supposed to do, doesn't it?

Everyone should also be aware again of how the vaccine efficacy is calculated.

When the experts tell you it is 95% effective you should know what they mean.

I recently saw this fact sheet published by Novavax on its vaccine that recently completed its Phase 3 trial in the U.K.

The vaccine is claimed by Novavax to have a 96.4% vaccine efficacy against Covid-19. 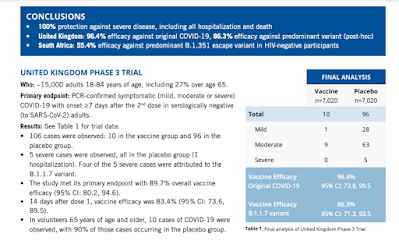 The point being is that we don't know how much of a role the natural immune system is playing in all of this to begin with. None of this is ever mentioned by the "authorities" leaving people with the impression that you are defenseless without the vaccine.

Is that really the case?

In a recent blog I cited the JAMA analysis from 54 studies around the world that showed that only 18% of those in the same household with Covid also contracted the disease. This would suggest that natural immunity may be protecting 82% from the virus to begin with. Consider as well this is in a situation where there is a known Covid case in the household. In the clinical trials involving the Covid vaccine there is no way of knowing if some of the people in the study ever came into close contact with any Covid positive case.

Beware the influence of authority.

Know that you are predisposed to do what authority figures tell you to do. It is the way we are all built.

However, do the "authorities" know what they are doing? Can you trust them?

How good has their record been over the last year?

The biggest thing I hear from people today is they do not know who or what to believe.

Do your own research. No one has your best interests in mind better than you.

My objective is to give you some facts and perspectives you may not see from other sources.

I wish I knew all the answers. I don't.

I do know that most people should be asking a lot more questions of the authorities than they are.