Who Could Have Predicted?

It is too easy to be wrong.

However, Joe Biden makes it a lot easier for me to forget my rule.

For example, consider Biden's fall walking up the steps on Air Force One on Friday.

Biden is clearly past his prime and it is questionable whether he can withstand the rigors of being President. If you doubt that, consider how many times Trump stood up and took dozens of questions from reporters at Covid briefings or how many rallies he spoke at.

Can you even imagine Biden being able to do that?

I am wondering whether Biden can easily climb up the steps to Air Force One?

I posted this picture showing how daunting the steps must look to the 78 year old Biden. 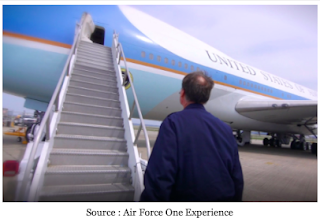 How did the White House explain the fall?

“It was very windy. I almost fell coming up the steps myself. He is doing 100 percent,” she told reporters. “He’s doing fine. He’s preparing for the trip just fine.”

Let it not be forgotten that Biden broke his foot back in December in what we were told was a mishap occurred when Biden tripped over his dog after pulling the canine's tail after coming out of the shower.

Really? If not true, these excuses do get a "C" for creativity.

Of course, falls by the elderly are no laughing matter.

Considering Biden's age and his two recent falls it appears to me that we should be much more concerned about the fall risk of Biden than the risks of Covid to the majority of our population.

You might also recall the hysteria the media went through when President Trump walked gingerly down a wet ramp at West Point last June after giving a speech.

CNN spent several days telling us that everyone should have serious concerns about Trump's health.

President Donald Trump's slow and halting descent down a ramp following his commencement speech at West Point lit up the internet over the weekend, with many speculating about whether he was in ill health.

Compare that coverage with that of Biden who has had two actual falls in the last several months and yet are dismissed by the "wind" and a "dog".

Who would have predicted we would see such a double standard at work in the media?

Look at something else I predicted right after election day.

How many times has Joe Biden stood up and answered questions from the press?

Trump was known to do it continually and for long periods of time standing in front of the White House press corps.

Biden has still not had a formal press conference.

He also has not addressed a joint session of Congress thus far which is highly unusual for a new President.

For context, here are the dates when the last six newly seated Presidents delivered their first speech to a joint session of Congress.

It makes you wonder what is going on and whether Biden is capable of discharging the duties of his office.

A recent Rasmussen poll found that 50% of likely voters lacked confidence in Biden's fitness for office based on what they had observed thus far.

Rasmussen also found that only 47% of American voters believe that Biden is really doing the job of President. An identical 47% believe that others are making the decisions for him behind the scenes.

I have always found it troubling that so many Americans seem to have the view that it really doesn't make a difference who the President is.

I made a prediction shortly after the election that it would not take long to start to seeing how wrong this idea was.

Unfortunately, that is another prediction that is coming to pass.

Look no further than the chaos and crisis on our Southern border right now.

This is a headline from CNN!

Look at the total disrespect shown to Biden and the United States by the Communist Chinese in Anchorage, Alaska in recent days.

I noted in November that we should also keep an eye on gasoline prices considering Biden's views on energy.

At the time of the election, gasoline prices were below $2.00 per gallon in many parts of the country. The national average was $2.20 for regular.

The latest national average price is $2.94. Prices have increased almost daily since Biden was elected.

Gas prices are a little higher in Los Angeles who voted overwhelmingly for Biden.

I am also waiting to see what awaits us with Russia, North Korea, Iran, Venezuela, Cuba, Afghanistan and other areas besides China where a deft foreign policy touch and smart decision making is required.

It is not an area that Joe Biden has distinguished himself in the past.

You may recall that Robert Gates, who was the Secretary of Defense, in the Obama/Biden administration  said in his memoir that Biden has "been wrong on nearly every major foreign policy and national security issue over the past four decades."

Perhaps there is a reason that China is dissing the United States and Vladimir Putin is challenging Biden to a debate?

Who could have predicted any of this?

Biden was a below average career politician for almost 50 years.

What is there to suggest anywhere that a man with this record, who is clearly past his prime, is capable of distinguishing himself in any way as the leader of the United States of America?

Are you beginning to see why it is a lot easier to forget my rule about making predictions when it comes to Joe Biden?