One of the greatest challenges to understanding the best approach to combating Covid-19 is the fact that there are so many variables in play.

If anyone states that they know that a specific intervention works (or doesn't work) they are likely not being honest.

This is even true for someone who believes they are safe because they have self-isolated for the last year and have not left their house or interacted with anyone the entire period.

One of the more interesting factoids I learned this year was the 1973 research that showed an outbreak of a common cold virus in Antartica even though everyone on the base had been isolated from the outside world for 17 weeks.

It has never been determined how this was possible based on our knowledge of virus transmission.

Is 6 feet of social distancing enough? Does it matter?

Do masks work? It seems if that if they did we would see some hard evidence by now.

After all, CDC Director Robert Redfield said back in July that Covid would be under control in 4-6 weeks if we all wore masks.

Redfield also testified to Congress in September that face masks offer more Covid protection than the vaccine would.

Let's take a look at how that has worked out in Rhode Island. Rhode Island was one of the first states to initiate a statewide mask mandate (April 18, 2020) and has had it in place for the last 11 months.

It has 96% mask compliance from its population "every time they go out".

How has the mask mandate worked in controlling Covid in the state?

The big bet now is on the vaccines.

I hope they work.

However, the early data does not tell me that conclusively. In fact, it some places around the world it appears that right after the vaccine program began there was a spike in cases.

Is that just a coincidence? Were the new infections driven by seasonality which had nothing to do with the vaccine program? That is entirely possible.

The good news is that 4-6 weeks after the vaccine program begins cases and deaths have generally started falling. However, is this the vaccine at work or is this the virus dying out on its own?

Take a look at the experience on the Isle of Man. I believe small island geographies are good places to evaluate data on Covid because the variable of people moving on and off of the island is better controlled.

All of the case and death data below is from Worldometers.info. The vaccine data is from CNN's global vaccination tracker.

The Isle of Man started its vaccination program on February 6. To date, vaccine doses equal to 39% of the population have been given.

There were almost no cases of Covid before vaccinations began. Shortly after, cases exploded. Is this a coincidence or is something else at play?

Israel has administered vaccines doses equal to 110% of the country. This would be equivalent to 55% of the country getting both doses of the Pfizer vaccine. Since those under age 18 are excluded this represents a substantial majority of the adult population.

The vaccine program began December 19 meaning we are three months in at this point.

Did the vaccines drive the large wave that followed the start of the vaccine program or was this natural seasonality?

Did the vaccines bring down a seasonal wave or is this a natural cyclical movement? (Note comparison to earlier wave with no vaccines).

In looking at the data it is a little more troubling seeing that the 7-day moving average of deaths is actually higher today (15) than it was when the vaccine program started (13) three months ago.

We see a similar pattern in cases in the UK which began its vaccine program on December 8.

The UK has given doses equal to 39% of the population.

The good news in the UK numbers is the deaths have been driven down considerably compared to what they were averaging before the vaccine program began. This is what we would hope to see and provides some optimism that the main goal of the vaccine (less serious illness and death) is being realized.

What do the numbers look like in the United States?

The United States started vaccinating on December 14 and doses equal to 39% of the population have been distributed to patients thus far.

The United States did not see the same pronounced spike in cases right after vaccine distribution began that we see in the other examples above.

Could this be because there was more natural immunity already present?

However, it is clear that there has been a dramatic decrease in new cases in the last two months.

In my view, it is unlikely that the vaccines have had that big an effect on the declining cases in that most vaccinations have gone to those age 65+ which were not considered major vectors of transmission of the virus. Those between ages 20-49 have been considered the biggest spreaders of the virus.

Could younger healthcare workers who have received the vaccine had that large an effect?

The good news is that deaths have fallen in the same general trend as new cases. 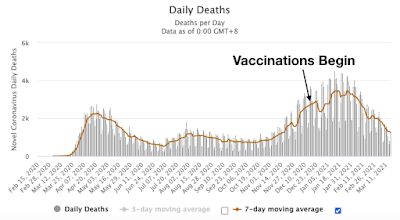 We don't yet have reliable data on whether the decrease in deaths is primarily related to those in the  65+ age groups that have been the major focus area for the vaccines. This will be important information to monitor.

Below is the CDC chart on all-cause deaths since January, 2020.

Note that overall all-cause deaths in the United States has been pretty stable at around 60,000 per week except for the six weeks between April and May, 2020 and the three months between November and January.

Information is only considered complete through February 6 due to reporting lags.

On the other side of the age spectrum the Covid pandemic has resulted in much lower death counts for those ages 0-24.

Look at this chart and ask yourself the question as to whether in the entire time of human history has there been a pandemic and overall death rates of the young have gone down?

Why have any schools been closed?

What reason is there to subject anyone in these age groups to an unapproved, emergency-use authorization vaccine?

I don't know the answer to most of the questions posed above. It is too difficult to isolate cause and effect to draw firm conclusions from the data.

As to the last two questions, the data seems to lead to pretty obvious answers.

Why then, are so many schools still closed and why will we undoubtedly soon be told that every child in the country needs to be vaccinated?