One of the main reasons I write BeeLine is because I so often see facts that are so removed from the perceptions of the public.

I spend a lot of time providing facts, data and context around issues in which perceptions have become reality to so many people.

Nowhere has that been more apparent in the last year than with people's perceptions about the risks of Covid-19.

There is no better example than this recent survey which asked people what are the chances that someone with Covid must be hospitalized?

The correct answer is 1%-5% with the actual percent closer to 1% when taking account of the large number of Covid cases that were never confirmed by testing.

Look at the answers to the survey in the chart below.

Notice how political bias influences the answer. 41% of Democrats believe that more than half of those with Covid end up being hospitalized?

However, more people answered 50% and up than any other percentage with every political group.

Note as well that the media portrays Republicans as "Covid deniers", or worse, yet they have the best handle on the true facts.

How can perceptions be so far removed from reality?

The only answer is that perceptions have been shaped by a media and political narrative rather than real facts.

It would be easy to laugh this off as a bunch of misinformed and misguided individuals but these people in turn provide the political support and backing for continuing economic lockdowns, school closures and mandatory mask policies.

These are the same people who are trying to push to the front of the line to be vaccinated and will undoubtedly soon be arguing that everyone in the country needs to be inoculated with experimental vaccines that have only be authorized for emergency use. That includes school age children in which the hospitalization rate from Covid can barely be seen in this chart from the CDC.

In the meantime, deaths from any cause for those aged 0-24 in the United States have been falling for the last year despite the fact that we are in the middle of a pandemic.

Have we ever seen anything resembling this in the history of mankind?

By the way, the word pandemic is derived from the Greek words pan, all, and demos, people, meaning literally that it affects all people alike. This has hardly been the case with Covid.

Looking at the facts, what has been the justification to close schools and colleges over the last year?

Another subject in which you are most certainly going to find a wide disparity between people's perceptions and reality involves taxation.

A recent Rasmussen poll found that more than half of Americans believe that they are paying more than their fair share of taxes.

The same poll found that when asked the question how much taxes does a person pay who makes twice as much as they are, few thought the higher earners were paying at least twice as much in taxes.

Only 7% believed that someone making twice their income paid more than twice as much in taxes.

Of course, this perception could not be further removed from the facts.
The most recent IRS statistics (for 2018 tax returns that included the Trump tax cuts) show that the top 1% of earners now pay 40.1% of all federal income taxes. The income of this group represents 20.9% of all income.
On the other hand, the bottom 50% of income earners pay just 2.9% of the total federal income tax bill. 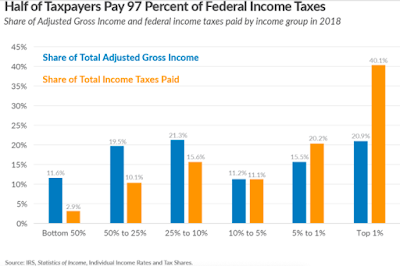 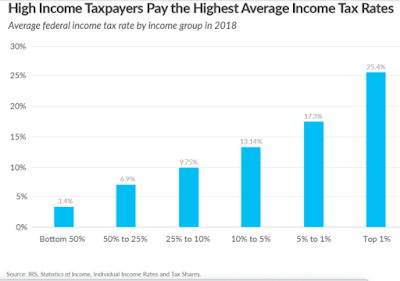 Let's look at some specific examples to see the federal income taxes owed at several income levels using the HR Block income tax calculator.
In all cases, I assumed a husband and wife who were both 45 years of age with two child dependents and household income consisting entirely of wages. I used the standard deduction for the first two income levels and I used itemized deductions equal to 10% of income for the two higher income levels.
I did not include any recovery rebate tax credits for any income groups but that would have represented a substantial tax credit for households making $80,000 and $160,000 in 2020.
You can readily see that a doubling of income means much more than a doubling of the federal income taxes paid.
I could reduce the federal tax burden on the higher incomes if I assumed some of the income was capital gains or dividend income but I think you can see how far off the perception is about what the rich pay compared to the facts.
Federal Taxes
$80,000 of income                 $2,229
$160,000 of income               $17,324
$320,000 of income               $53,909
$640,000 of income               $154,700
Yes, payroll taxes, sales taxes and property taxes are not progressive taxes but those with higher incomes will generally still pay increased taxes here as well in relationship to their increases in income.
Why then do people think that those who make more are not paying their "fair share" of taxes?
Again, it is based solely on a political narrative.
What is "fair"? Who decides? How much is too much?
We are likely to hear a lot more about this in the coming weeks as the Biden administration prepares a tax bill that will propose substantial tax increases on the "rich".
Pay attention to how they use the narrative but don't forget the basic facts.
One fact that I think is interesting but you will likely not hear anywhere else shows how removed from reality we are right now.
You could apply a 100% tax rate to the top 1% income tax earners and you still would not have enough money to pay for the recent $1.9 trillion Covid relief bill. (based on data in most recent IRS Statistics of Income)
That also does not include the $4.2 trillion in additional Covid relief that was part of earlier legislation over the last 12 months.

One thing is true.
Perceptions are so much better for the simple fact that reality bites so often.
This is such a time.
Posted by BeeLine at 9:40 PM