Democrats and others have become unhinged that Georgia has passed a law requiring voters requesting an absentee ballot to provide their drivers license or state id number in order to request a ballot. The new law includes other measures to insure greater election integrity such as locating voting mail boxes in more secure places and making it clear that voters may not be given anything within 150 feet of the voting location (food, water, gifts, campaign material etc).

This CNN analysis stated that "Georgia Republicans shocked the nation with the swift passage of the legislation" and the new law has placed "the rest of the national GOP at a crossroads, where its members must decide whether they are willing to belong to the party of disenfranchisement."

Joe Biden called the new law an "atrocity" and stated the Justice Department is "taking a look" at the measure.

Biden also called it an example of "Jim Crow in the 21st Century".

My advice is that while the Justice Department is taking a look they might want to see what the current law in Georgia has been for those voting in person.

Anyone voting in person in Georgia has already had to produce a photo id in order to vote.

Below is a screen shot of the Georgia voter id requirements that have been in place for some time for in person voting.

Note that if you do not have another government id card you can get one for FREE. 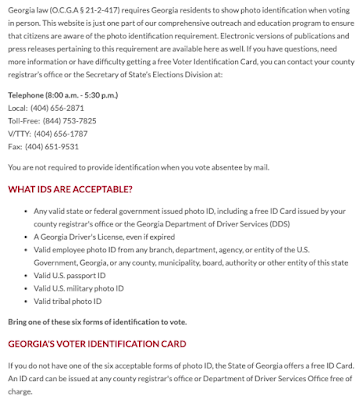 In what universe does it make sense to require an ID when a living, breathing individual shows up to vote in person but nothing is required for an anonymous mailed-in absentee ballot that could be voted by anyone randomly?

Joe Biden also might want to look at the voting requirements in his home state of Delaware if he is worried about Jim Crow in Georgia.

Unlike Georgia, Delaware does not allow absentee or early mail-in voting except in very limited circumstances. Georgia allows anyone to vote absentee without giving a reason.

Delaware also requires an ID to register or vote and also requires the last four digits of a voter's Social Security number on any absentee mail-in ballots.

Do they really think it is more crucial to have a photo id to pick up baseball tickets than it is to protect the integrity of the vote?

Of course, we all know how many other instances it is required that you must produce a photo id in our society today.

You have to do it to board an airplane, cash a check, buy alcohol or get a hotel room for the night to name a few. I have to show mine when I go to the doctor.

In fact, a regular driver's license photo id will no longer even be enough to board an airplane in the United States beginning October 1, 2021 (extended from a year earlier due to the pandemic). On that date you will need a Real ID driver's license.

This requirement of federal law requires all states to follow the same documentation rules in issuing driver's licenses.

All states are now subjected to the same guidelines, which require a person to show up to a local DMV with documents that show their legal name, date of birth, Social Security number, two forms of proof of address, and citizenship or immigration status.

I ask once again. We now have all of these requirements to get a driver's license that will be required to be shown to board an airplane but it is voter suppression to ask someone for an ID to vote?

Of course, if you are an illegal alien you don't need any Real ID or any other identification to get on a plane these days.

The Biden administration is sending illegals to the airport in McAllen, TX with a note and sending them on their way to other parts of the United States with no ID. 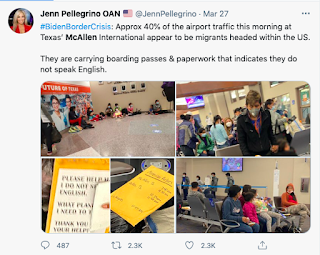 It might be worth noting here that the same people who think it is not necessary for anyone to have to produce an ID to vote will also most assuredly be the same ones who will soon be arguing that it is absolutely required to have a "vaccine passport" if you want to travel, attend a sporting or entertainment venue, shop, or do anything else outside your home.

These are also the same people who don't want you to look at the physical or biological identity of anyone and refer to them as "he" or "she". You now should only identify people using "gender-neutral" language because the man or woman you see with your own eyes may "identify" differently.
If not, you are guilty of a micro-aggression. And no one wants to be accused of that these days.
Have we reached a point of maximum ID idiocy?
Don't count on it.
The Democrats and Leftists are likely just getting warmed up.
Posted by BeeLine at 9:00 PM