Close To The End Or A Lull?

Are we close to the end of the Covid pandemic or are we just in a lull before cases accelerate in a fourth wave?

Daily confirmed cases have decreased 80% in the last two months.

Hospitalizations have fallen in the same pattern.

Daily deaths lag the other metrics but they are also headed in the right direction.

In the meantime, less than 4% of those taking Covid tests are testing positive for the first time since testing began.

Thus far, 60 million Americans have received at least one dose of the Covid vaccines.

That is 24% of the adult population.

It is estimated that 71 million Americans have had Covid in the last year. This would be about 21.5% of the population.

Combined, this would indicate that almost half of the population has some type of antibodies to the virus. This should suggest that we are nearing the end of the pandemic if the vaccines are anywhere nearly effective as the clinical trials indicated.

Governors in states like Texas and Mississippi  have joined states such as Florida and South Dakota in removing mask mandates and lockdown restrictions in their states.

Tony Fauci has criticized the easing of Covid restrictions and warned that "another spike" in cases could be in the near future.

White House coronavirus adviser Anthony Fauci warned that the U.S. could soon see a new surge of COVID-19 if Americans do not continue to follow public health advice on pandemic mitigation.

Joe Biden referred to the governors of the states easing restrictions as "Neanderthals".

Dr. Michael Osterholm, one of Biden's top Covid advisers, recently warned that we are just at a lull in the storm.

Today, Dr. Osterholm is warning that a “Category 5 COVID-hurricane” is on the horizon, with the B117/UK Variant posing the greatest threat. As positive cases and deaths decline, he warns that the media has been negligent in their overly positive reporting.

Indeed, the scientific community is engaged in an important debate. On one side, we have scientists who believe enough Americans have been infected and, as a result, have developed enough immunity to avoid a serious surge. Moreover, this group insists that enough Americans have been vaccinated (combined with the number infected) that we shouldn’t worry about a major surge in cases or deaths due to the B117 variant.

On the other side, Dr. Osterholm and others argue that not enough Americans have been infected or vaccinated. Consequently, the new variants, particularly the B117/UK variant, will cause a spike in cases and deaths in the next 6–14 weeks.

Osterholm has been especially critical of Florida's policies arguing that it seems to be ground zero in the United States for the B117 variant to wreak havoc in that 50% of the cases in that state are now of that type.

However, even though the B117 variant is growing as a percentage of all cases the total cases in the state continue to decline.

Is the B117 variant overwhelming the standard variant much like Covid displaced the flu this year? 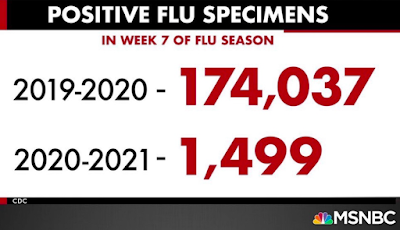 In addition, if you think the flu has disappeared because of masking and social distancing as Dr. Fauci suggests compare Sweden (almost no masks) and Japan (used masks even before Covid in flu season).

Keep your eyes on Florida to see if Osterholm, Biden and Fauci are correct about a new surge in cases. You should see it first there if a "hurricane" of cases is developing in the United States.

Switzerland is a country that is also seeing a large increase in the percentage of B117 variant cases as a percent of the total.

However, like Florida, despite the increase in the variant, total cases are declining in Switzerland. 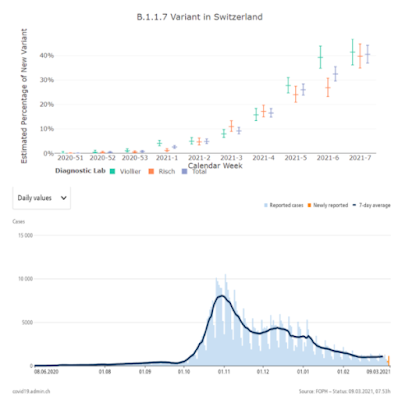 My guess is that people like Biden, Fauci and Osterholm are really less concerned that another wave is going to hit states like Florida and Texas due to the the easing of restrictions and more concerned that it might be shown that mask mandates and lockdowns are not necessary (and never really were effective).

I wrote early in the pandemic (actually almost exactly one year ago) that if everyone follows the herd there is no way of knowing who was right or wrong in the end. There may be a better (or worse) path but if everyone is on the the same path you are never going to know anything different. You all reach the same point in the same way.

We may be at the point where we are finally seeing a real separation of the herd. Some states appear ready to open and get back to normal. Others want to stay hunkered down.

If the states that open fare no worse than those who are locked down it will be harder and harder for the politicians and public health "experts" to argue that we should not be returning to normal.

If you need to see how far gone all of this has gotten, consider the fact that it is now "alarming" to even consider that we may be "edging toward normal". 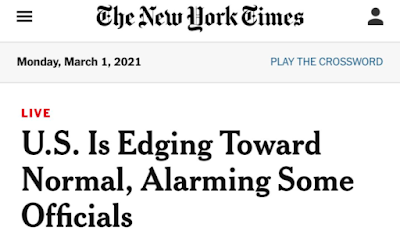 My prediction is that we will return to normal in much the same way that we retreated from normal.

The herd will be in control.

Once the momentum is established in one direction it gets harder and harder for the herd to not follow.

Today it might only be South Dakota, Florida and Texas.

However, blue state Connecticut has already announced the easing of restrictions beginning March 19.

If others follow, the herd will be on the move.

We are not there yet but the next month is going to tell us a lot.

How long before California, New York or Illinois are forced to follow?

All the data suggests that the end is nigh.

The numbers of those who have been infected.

The vaccine doses already delivered (especially to the most vulnerable) and the forecast of over 2 million vaccinations daily going forward. If this does not end the pandemic then the vaccine was vastly overrated.

The favorable seasonality patterns in the United States beginning in the next month or so.

The fact that most viruses normally burn themselves out within nine months. I believe we have exceeded that normal life cycle and extended the length of this pandemic due to the lockdowns. However, we have to be close to the end of the natural cycle in any event.

Let's hope all of this is correct.

Of course, Covid has proven a lot of experts wrong over the last year.

It could easily fool me. I might be wrong in looking at the data and trends.

However, even if that turns out to be true, I would still have a better record concerning my perspectives and predictions about Covid than Dr. Fauci and many of the so-called "experts" have had over the last year.

Lest we forget, it was exactly one year ago that Dr. Fauci said this in an interview on 60 Minutes.

There's no reason to be walking around with a mask. When you're in the middle of an outbreak, wearing a mask might make people feel a little bit better and it might even block a droplet, but it's not providing the perfect protection that people think that it is.

Today Fauci is telling everyone to wear two masks and saying it is possible we will still need to wear masks until 2022.

If I were this wrong about anything I can understand why you would never read another word I wrote.

Why does this man have any credibility left at all?

That will always remain one of the great mysteries of Covid.