The Future Does Not Look Familiar

In 1965 Jack Nicklaus obliterated the Masters scoring record in winning the tournament by 9 shots.

Bobby Jones, the founder of the tournament, was asked by reporters what he thought of the performance of Nicklaus. He responded simply.

"Nicklaus played a game with which I am not familiar".

I believe many people are saying the same thing today when they observe what is going on in the United States of America.

It is increasingly becoming a nation with which they are not familiar.

We see it everywhere we look.

Censorship. Cancel culture. The Woke Movement. Gaslighting. Deep political divisions. Calls to defund and do away with the police. Calls to eliminate our borders. Deficit spending without bounds.

I have never lived in a more troubling time and I have been around through the Cold War, the Cuban Missile Crisis, the Kennedy assassination, Vietnam, Watergate, the inflation and high interest rates of the early 1980's, the Gulf War, 9/11, the Great Recession, the rise of ISIS and much more including the insanity of the Covid response over the last year.

I have seen troubling times. However, I have also seen the resilience in this nation to recover from those tough times. However, today seems different. The foundation is cracking and the fabric that holds society together seems to be tearing away.

If you doubt this look no further than this shocking survey finding that was recently buried within a New York magazine story. The survey was done by Democratic data scientist David Shor.

30% of American women under 25 identify as LBGT.

Has any society anywhere ever seen anything that resembles this?

3 of 10 women have no interest at all in a committed heterosexual relationship?

These are women who are in prime childbearing years and yet they state they have no interest in men and apparently have no desire to marry, have children and establish a traditional family.

What does this mean for the future of American society? We are in uncharted waters.

The percentage of women over age 60 that identify as LBGT in the same survey is 5%.

The overall estimated percentage of the population to be LBGT is estimated to be 4.5%. 58%% of that population is made up of women. 42% of men.

This chart from the Williams Institute breaks down the data by state.

Interestingly, the District of Columbia has the highest percentage of LBGT in its population by a lot---9.8%

Some might look at the 30% LBGT number and argue that it is skewed by the "B" (bisexual) regarding women who are not exclusively interested in other women. Perhaps they will someday embrace heterosexuality and traditional norms. However, it is still hard to look at anything to do with that number in comparison with the population at large and other age groups of women and not ask what is going on with younger women?

How is this possible?

Is it something in the water?

Is it something in the educational system?

Is it something in our culture today?

Does it have something to do with men today?

When you look at that number it also seems to obliterate any notion that someone might argue "they were born that way".

Why would the number of those who were LGBT be consistently below 5% for decades (if not centuries) and all of a sudden become 30% with young women today?

Just as perplexing is a recent survey by Rasmussen that asked U.S. adults whether they favored or opposed allowing transgender students to participate in the sports teams of the gender they identified with.

Only 32% of adults were in favor of allowing transgender students to do so. 28% of men held that view and 36% of women.

However, of women who are under the age of 40, 57% were in favor of transgender identity being the sole determinant for sports participation rather than biological science. This effectively means these young women are in support of men playing women's sports.

I am not sure that you could find any position by anyone that would be more detrimental to one's self interest. What do these young women think is going to happen to women's athletics if biological males are allowed to compete with biological women? Science gives us the answer and it is not a good result for any woman.

However, this thinking is entirely consistent with the broad support that young women showed over the summer in all of the Black Lives Matter protests.

I asked a similar question in my blog post last summer ("What Is It With Millennial Women",) as young, white single women were the dominant force in many BLM protests. How did any of that make sense when the central policy goal of BLM was to defund the police?

Who would be most vulnerable in a society with no police? Young, single women.

The sad truth is that it does not look like things are going to get any better.

For example, New Jersey recently passed a law that requires all New Jersey school districts to have lessons on sexual orientation and transgenderism to students beginning in kindergarten as part of an overall curriculum on diversity and inclusion.

In the meantime, Joe Biden nominated Dr. Rachel Levine (formerly Richard Levine for the first 53 years of her life) to be Assistant Secretary of Health in the Biden administration.

She would be the first openly transgender person to ever be confirmed by the Senate.

I wrote about the sorry state of affairs regarding transgender issues and our schools a couple of years ago. This includes examples of where schools are overriding the desires of parents on these issues. It seems that you need a parent's permission to go on a school trip or to play in the school band but you don't need the parent's permission to agree with Joseph that he really is JoAnn.

I cited the research of Dr. Paul McHugh the psychiatrist-in-chief at Johns Hopkins University who in 1979 put a stop to all gender reassignment surgeries at the hospital in light of his findings that almost all transgender issues involved mental issues. Many elite medical centers followed suit.

However, over the last 10 years much has changed. Science has been ignored because of politics. 45 gender clinics have opened across the country catering solely to children with transgender issues. Are we to believe that this has all resulted from genetic errors? Are we to believe all of these transgender issues just suddenly materialized out of thin air over the last decade?

McHugh still believes transgenderism is a mental disorder 40 years later even though he is now attacked regularly by the LGBT community. His own hospital has reversed course due to the political environment and is once again doing gender reassignment surgeries.

The science has not changed. Only the politics. 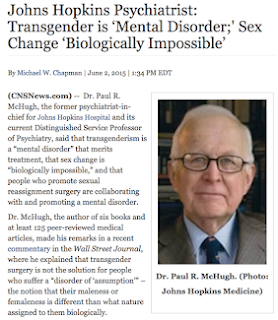 Have women also actually changed so much that 30% of them no longer care about heterosexual relationships?
I can assure you the science has not changed on any on this. Your guess is as good as mine as why we find ourselves where we are with young women in this country.
All I know is that if this is the state we are in it does not bode well for the future of our society.
No families and no children eventually means there is no future.
We are increasingly living in a nation with which I am not familiar.
If we continue on this path, the future will bear little resemblance to what we consider familiar.
May God help us all.
Posted by BeeLine at 7:39 PM