The Biden administration has spent the last few months denying that the chaos from the flood of illegal immigrants over the southern border of the United States is a crisis.

Of course, the mainstream media has done all it can to repeat that narrative.

For example, the Associated Press in an internal memo told all of its reporters and editors to avoid using the word "crisis" to refer to the migrant surge at the border.

Let's look at the facts regarding what has transpired at the border with Joe Biden in charge.

The U.S. Border Patrol recently reported that it apprehended 172,331 illegal aliens crossing the border in March. 101,028 were apprehended in February. Of course, we have no idea how many more snuck into the country and eluded capture.

Let's put those numbers in context.

If the number of illegals coming into the country for the first full two months of the Biden administration continues for a full year we will see over 1.6 million illegal immigrants.

Current United States immigration law establishes the number of legal immigrants who can enter the country each year at approximately 1.1 million.

In other words, the number of illegals entering the country this year will be almost 50% more than the number of legal immigrants established by law.

There is a reason that we have a law that establishes standards and rules for those who want to enter the United States. It is meant to facilitate a fair and orderly process for people from all over the world to have the opportunity to immigrate to the United States.

No other country in the world allows for more legal immigration annually than the United States of America. Ignoring the law and allowing the border to be overwhelmed is not only unfair to those in other parts of the world who are waiting to immigrate here legally but it is a recipe for chaos and crisis.

The dimensions of the crisis comes into even clearer focus when you look at the data concerning the number of unaccompanied minors who have crossed the border.

18,663 unaccompanied children were in those March numbers of illegals that were apprehended. That is over 10% of the total. There were an additional 9,271 in February and 5,689 in January.

This is a graph from U.S. Customs and Border Protection that compares border encounters for unaccompanied minors between 2021 and 2020.

You may recall the constant criticism that the Trump administration received for allegedly housing the unaccompanied minors in "cages".  Never mind that the so-called "cages" were built by the Obama administration.

It seems that most are no longer concerned about those children in cages. The New York Post is an exception which posted this picture of the holding facility in Donna, Texas. 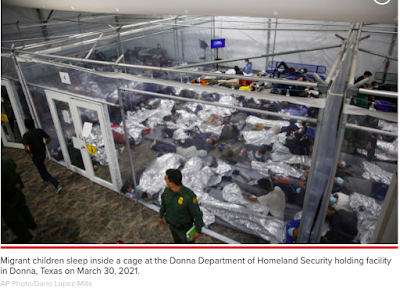 Alexandria Ocasio-Cortez is also speaking out.

AOC actually has called for reparations for illegal families entering the country due to the overcrowded conditions at the border. Who else would think that giving money to people for breaking the law and creating the chaos and crisis at the border would be a good idea?

Pete Buttigieg, Biden's Transportation Secretary, also actually advocated for the same thing when he was running for President.

Of course, Biden himself encouraged all of the chaos we are seeing now when he signaled during his Presidential campaign that he would welcome migrants into the United States.

During a 2019 Democratic presidential primary debate, President Biden said that the United States is a country that tells people struggling under oppression or poor conditions, "You should come," as he argued for a more open asylum policy.

This is how you end up with illegals at our border with t-shirts like this.

Doesn't this make you wonder who is paying for the shirts and coordinating all of this? Is it the DNC? George Soros? China? Russia? Iran?

How do supposedly oppressed and poverty-striken migrants organize and fund a PR campaign and pay for t-shirts that are clearly meant for media consumption?

When you look at the facts and data the "Biden Effect" is unmistakable.

The President of the National Border Patrol Council stated that it is "the biggest surge we have seen in the history of the Border Patrol".

You can see how the number of unaccompanied children in HHS care has exploded in the last three weeks from this dataset.

How many unaccompanied children were in HHS care in 2018 and 2019 when the Trump administration was being criticized for the "crisis" caused by the large number of migrants in custodial care?

However, the 19,798 unaccompanied children in HHS care today is not a crisis?

What we are seeing today are the consequences.