Conformity Is More Contagious Than Covid

Do you remember the date?

New York Governor Cuomo and New York City Mayor were telling us on that date that they had no intention to close schools, close bars, restaurants and businesses and impose lockdowns.

We were still four days away from President Trump's "15 days to slow the spread announcement".

Ohio Governor Mike DeWine had just announced a ban of any gatherings of more than 100 people (exemption for religious services) and school closures for three weeks. The gathering ban would effect the upcoming NCAA basketball tournament in which the first games were to be played in Dayton, Ohio.

This is what I wrote on that date.

There are two fundamental truths about human beings that I always keep in mind.

First, the natural human condition is to be a conformist. People do not generally like to separate themselves too far from the herd.

Second, there is nothing more contagious than fear.

We are seeing both in vivid detail right now.

It is not easy separating yourself from the herd. It goes against most human instincts. It always feels safer and secure to conform. After all, there has always been much greater risk to stray from the herd or crowd.

You often feel better and more secure in conforming and not sticking your head out from the crowd. It is harder to be called out or criticized if you are doing what everyone else is doing. However, the crowd you are following can sometimes be heading in the wrong direction.

I went on to predict that it was almost certain that the NCAA basketball tournament would be cancelled. (that was announced the next day).

I also predicted that all college sports would also be cancelled for the Spring season. (they were).

Additional predictions I made based on understanding the contagiousness of conformity when Cuomo and DeBlasio in New York were still resisting closing the schools.

NBA. NHL. MLB. MLS, NCAA Tournament. All games cancelled. The pros may yet play again this season but the college players are done.

No one wants to stand out from the crowd. Everyone is taking their cues from someone else.

Broadway is closed as of tonight. How long until all movie theaters are closed?

We are seeing the same thing play out in other areas.

Which organization or company is going to want to have a business meeting or conference? Who is willing to go against the grain? Just the same, who was willing to cancel a meeting a month ago when most everyone else was still meeting? Very, very few. Why stand out from the crowd?

We all know the rest of the story.
That includes the conformity on the use of mask mandates that followed a few months later.
Recall that for the first several months we were told that masks were not effective to stop the spread of the virus. All of the science to that point (and since) supports that view. However, that quickly changed as governmental authorities needed to have something to tell the public to make it appear that they were actually in control. And for the public to believe there was something they could do to be safe.
I had to laugh recently when I was watching Episode 4 of Season 1 of The Crown in which the plot line centers around the smog that enveloped London in December, 1952 in which thousands died due to breathing issues.
In the episode, Churchill's secretary takes her roommate to the hospital and sees the chaos first hand that is occurring as the health system attempts to deal with masses of sick people jamming the corridors.
The following dialogue ensues between a doctor and Churchill's secretary. 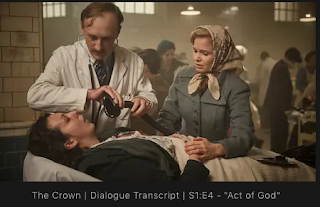 Keep in mind this episode originally aired in 2016. 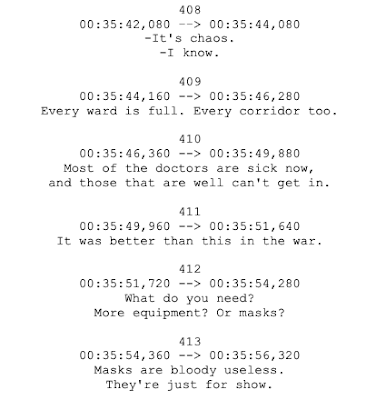 There are things you see in life that you just can't make up.
That was the science in 1952. It was also the science in March, 2020.
For context, here is a comparison of how large different particles are measured in micron size.
Wildfire smoke is 4 times larger than a Covid particle and a dust particle is 25 times the size of Covid.
However, this is what the CDC advice is with regard to wearing a mask to protect you from wildfire smoke.
A cloth mask that is supposed to protect you from Covid will not protect you from wildfire smoke even though those smoke microns are 4 times larger than Covid?
How does that make any logical sense whatsoever?
How does the CDC have any credibility left?
The one thing I could have never predicted is how long the contagion of fear and conformity would last.
Quite frankly, it has been unfathomable.
What will be interesting to see now is how quickly conformity will drive the reversal of everything we  have to do endure now that the CDC has stated that it is no longer necessary for vaccinated people to wear masks indoors or outdoors.
What is equally interesting is that in the day before the CDC announcement the CDC Director was still defending the use of masks by vaccinated people when pressed by CNN's Chris Cuomo. 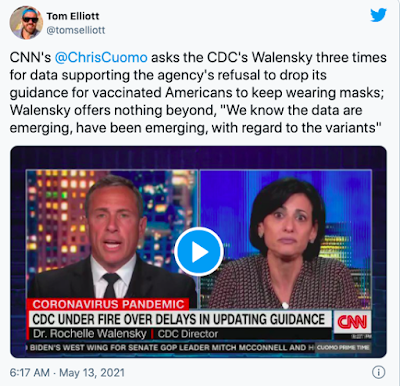 It makes you wonder whether science or politics is involved here?
For that matter, the evidence suggests that politics has been at the core of everything from the very beginning.
That is why I also wrote this on March 12, 2020 after seeing what was happening and predicting we were headed for an unprecedented disruption of our society due to governmental edicts.

I am not saying that all of this should not have been done. It may be exactly what is needed. Perhaps it should have been done two weeks ago. My point is that what has occurred in the last few days has resulted more by the pull of conformity than anything else. It was not science or statistics. Those did not change appreciably in the last couple of days. You can also be sure that many states will follow the lead of DeWine.

That is how powerful the force of conformity is in human beings. It also shows the importance of having the leaders and initiators among us making sound judgments and good decisions. If not, we will find ourselves on the wrong path. There are so many willing followers we better have great leaders to follow.

In addition, no matter how contagious Covid-19 is, it is nothing compared to the contagion of fear that surrounds everything and everyone right now.

However, the contagion of conformity is now working in reverse. The mandates and restrictions are suddenly going away now that the CDC is providing cover to the politicians.
In short order, the following states (all with Democrat governors) quickly announced they were ending mask mandates indoors for vaccinated people.
Kentucky
Minnesota
North Carolina
Michigan
Oregon
Connecticut
Illinois
Nevada
Pennsylvania
Washington
New York
Virginia
Colorado
Delaware
Most are also ending capacity limits on large gatherings such as sporting events.
26 out of the 50 states had already ended state required mandates before the CDC guidance was announced.
A number of large national retail chains quickly conformed around the CDC guidance.
Trader Joe's
Walmart
Sam's Club
Costco
Publix
Starbucks
We will undoubtedly see more in the next few days as the contagion of conformity takes hold further.
Unfortunately, the one group who seemingly will not be able to escape the masks are our children.
The CDC is holding firmly to the position that children must remain masked--in school, at summer camps and everywhere else because they will be the one group you know that are not vaccinated.
This might mean that this will soon be seeing sad sights like this everywhere we go. 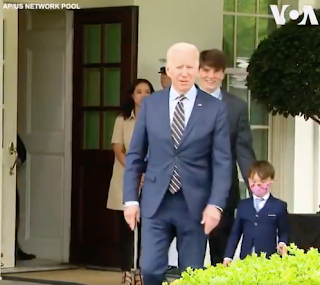 Call me cynical, but could the new mask rules be part of a strategy to set it up so parents will feel pressured to vaccinate their children?
I don't know what to believe anymore.
I do know that the need to conform is strong but it will not be easy for many to forget the fear mongering they have been forced to live under for the last 15 months.
Many do not want to ditch the masks because those people actually fear that others will believe they are conservatives, Republicans or Trump supporters.
Really? Yes.
The horror of it all to be thought of in such a way simply by not wearing a mask.

We seem to be getting past the pandemic.
It remains to be seen if we are going to get past the after-effects of the contagion of conformity, fear and the political divide that came with it.
Posted by BeeLine at 8:50 PM