Inflation In Our Future?

Many people in the United States have not experienced significant, sustained, across the board inflation.

It has been 40 years since we last saw double-digit annual inflation. For most of the last 30 years consumer prices have averaged about 2.5% per year.

Is this about to change?

There are troubling signs on the horizon.

Check out this comparison of prices on selected items over the last year. 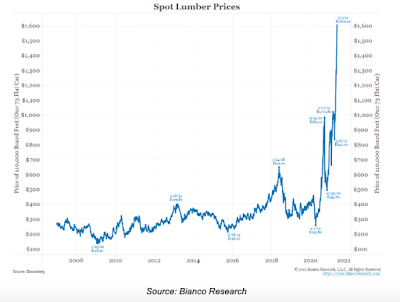 The Federal Reserve believes that the price increases are "transitory" and are not of immediate concern.

Many economic analysts are not as certain that is the case.

The Federal Reserve seems to be relying on the experience of the last 20 years which has seen deflationary pressures dominate.

This is largely a function of the globalization of the economy and, in particular, the tremendous influence that China has had since it joined the World Trade Organization (WTO) in 2001 and started exporting low-priced goods to the rest of the world.

This had a deflationary effect on scores of manufactured goods.

You can see the effect when you break down consumer inflation in the United States between services (excluding energy) and core goods.

Services inflation (excluding energy)  within the CPI index has averaged 2.8% per year over the 20 years leading up to Covid. This includes items such as rent, healthcare, college tuition, insurance and entertainment. 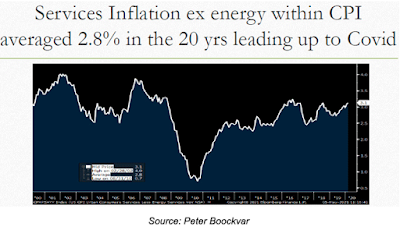 Core goods, which includes items such as food, household goods, clothing, toys and the like averaged 0% in inflation over those 20 years. 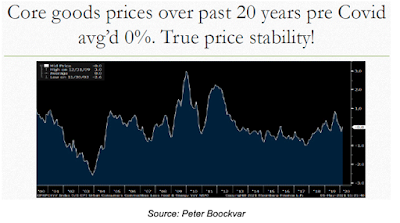 Do you see the difference? Low labor costs in China and many other countries around the world kept core goods inflation low. The same was not true with services that were more dependent on labor and other costs in the United States.

This is another graph that I have used in the past that makes the point with more specificity. This graph has inflation data only through 2016 but it clearly shows the differences we have seen between services and core goods inflation over the last 20 years.

You might look at the chart above and wonder how can it show that cars have only increased in price by 2.1% over the last 20 years?

This is due to the fact that the inflation index adjusts for new features and improvements that have been added to the price of the car. This is not price inflation. In effect, you are getting a better car than you did 20 years ago. Features such as air bags, back up cameras. better fuel efficiency etc. were not features you got 20 years ago.

The same goes for tv's. The flat screen television of today is a far cry from what you got 20 years ago.

There is no question that global economic forces over the last two decades have had a huge deflationary effect that ordinarily would have been expected to continue. The Federal Reserve believes that is still the long term trend.

If we are embarking on a longer term inflationary cycle it is clear that we have done it to ourselves with misguided government and fiscal policy.

For example, look at this chart that shows how much money has been put in the pockets of Americans with Covid stimulus policies.

In March and April, one-third of all income that went into the pockets of Americans came from government transfers. 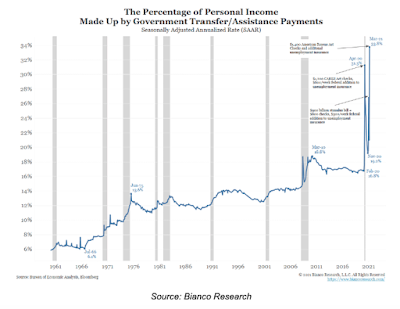 A lot of that money was not spent. It was put into savings. That money is now on the sidelines and could fuel demand-driven inflation at some point.

We may already be seeing the effects of that money in the recent increase in housing prices and in stock market prices. 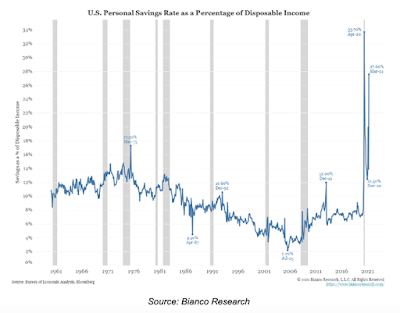 Of course, underlying all of this has been the easy money policies of the Federal Reserve.

This is a chart of the M2 money supply over the last three years.

None of what has been done would have been possible without the money printing done by the Fed.

We will see what the future brings.

If inflation is in our future it will have devastating effects on those at the bottom of the economic ladder and senior citizens in particular.

Of course, these are the same people that our politicians always assure us that they are committed to protecting first and foremost.

Those of us who lived through the inflationary period in the late 1970's know full well the effects that inflation can have.

We also know the extreme monetary measures that were required to wring inflation out of the economy in the early 1980's.

How does an 18% mortgage rate sound?

There is a reason that James Madison warned us in Federalist Papers #10 about what he called "Improper or Wicked Projects" that dangerous factions might promote at various times and places in our nation.

What was the first "Improper and Wicked Project" that Madison said we should be worried about?

1. A rage for paper money

The rage is here and almost no politicians are pushing back against it in Washington or anywhere else.

2. A rage for the abolition of debts.

How often do we hear that student debt should be abolished? We are also now hearing that rents that were not paid during the pandemic should also be abolished. How much further will this rage go?

3. A rage for an equal division of property.

It seems that James Madison knew what would be on the minds of AOC, Antifa and Black Lives Matter 250 years ago.

Notice the specific words that Madison used when he referred to these "projects".  Could he have been any clearer about what he thought?

I would dare say that even today's U.S. Supreme Court should have no problem in interpreting his intent in using those words.

Is inflation in our future?

Louis Gave is a global economic observer who has been in the deflationary camp for a long time. He  thinks the winds have changed.

He sums it up this way.