A few "this and that" items that I came across in my reading and research over the last week or so.

Do you recall that initially the entire justification to lockdown the economy in the spring of 2020 was to prevent our hospital system from being overwhelmed?

I guess we succeeded.

Annual spending for healthcare in 2020 actually declined 2% compared to 2019. It was the first decline in healthcare spending since 1960 when the government first started tracking it. That undoubtedly means that it was the first time it has ever occurred.

Hospital spending for the year was down 7%.

Dental services spending was down 20%.

Healthcare spending declines in the middle of what was termed the worst pandemic in the world in 100 years?

Who would have ever believed it possible?

Dr. Tony Fauci- So Wrong About So Much

You may recall that it was over a year ago that Dr. Tony Fauci disputed President Trump's suggestion that he had seen credible intelligence to suggest that Covid-19 had its origins in the Wuhan, China virology laboratory.

In March of this year Fauci disputed former CDC Robert Redfield when he stated that he also believed the virus originated in the Wuhan lab.

Dr. Anthony Fauci, a top adviser to President Biden on the coronavirus pandemic, said he didn’t believe that the coronavirus originated in a Chinese laboratory for studying pathogens, appearing to contradict controversial remarks made earlier in the day by the former head of the Centers for Disease Control and Prevention, Dr. Robert Redfield.

It was just two weeks ago that Fauci testified before a Senate committee that the NIH had not provided any type of funding to the Chinese lab to fund "gain of function" research that had been banned in the United States because it was deemed too dangerous.

During a Senate hearing on the U.S. pandemic response, Paul pressed Fauci about whether the NIH had provided funding to the Wuhan Virology Institute to fund “gain of function” research, a risky type of research that involves making pathogens more infectious and deadly.

"With all due respect, you are entirely, completely incorrect,” Fauci snapped back, adding the NIH “has not ever and does not now fund gain-of-function research in the Wuhan Institute of Virology."

Fauci is saying totally different things on both subjects today.

He is now saying that he is not convinced that Covid-19 developed naturally outside the Wuhan lab and supports a full investigation of what went on in China.

Fauci has turned 180 degrees on the subject.

Ironically, he is now at the same place that President Donald Trump was at over a year ago when Fauci and the mainstream media claimed that what Trump was saying about the origins of the virus was "baseless".

Fauci also admitted in further testimony to a Senate committee this week that the NIH had indeed funded research into the Wuhan lab to study the transmission of coronaviruses from bats to humans to better understand the SARS-CoV-1 epidemic in the early 2000s.

Fauci, the chief medical advisor to the White House, told lawmakers Tuesday that the National Institutes of Health funded the Wuhan Institute of Virology through the nonprofit EcoHealth Alliance with $600,000 over a period of five years. Funding to the nonprofit was eventually halted by the NIH.

Fauci seems to want us to believe there is a distinction between funding the Wuhan lab (run by the Communist Chinese Party) and funding gain of function research there. Dr. Fauci is clearly a very trusting man.

Fauci has proven to be wrong more than he is right. There also exists substantial questions about his truthfulness in almost everything he has done.

One of the things I was sure of was that a re-elected President Trump would have made sure that Dr. Fauci would not have served the U.S. government in any capacity during a second Trump term.

My guess is that Fauci will likely not last much longer in the Biden administration.

He is no longer useful to them and quickly is becoming a liability.

I would expect he will "retire" before the summer is out after what will be termed his "heroic and successful efforts" to fight the pandemic.

Unfortunately for the country, it will be at least a year too late.

Seeing the rapidly declining number of Covid cases in the United States, UK and Israel it is easy to look at the high vaccination rates in these countries and declare the vaccines responsible. 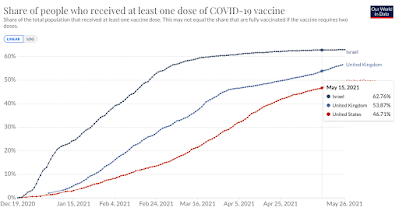 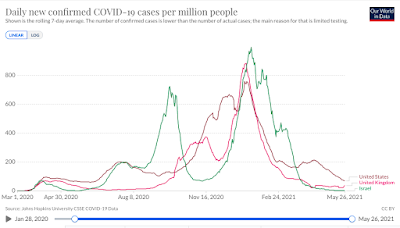 However, compare the UK case drop with that of these other European countries all of which have vaccinated less than 10% of their population.

The case curves are almost identical. 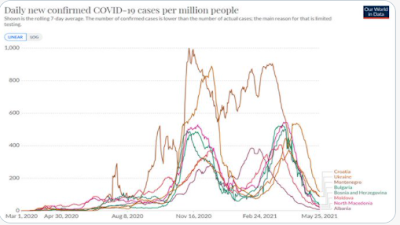 Compare Israel with the cases in Palestine which has vaccinated just 6% of its population. 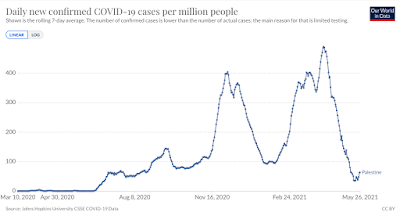 How much are the decrease in Covid cases attributable to the vaccines and how much relates to seasonality and natural herd immunity?

Many Democrat politicians have stated that we need to defund the police.

One is Atlanta councilman Antonio Brown who also wants to be the city's mayor.

Earlier this year Brown voted for an ordinance to withhold $73 million from the Atlanta police department in order to force a plan to reinvent the city's culture of policing.

What happened to Councilman Brown this week?

Councilman Antonio Brown was attending a ribbon-cutting ceremony at an event in northeast Atlanta around noon when at least four kids jumped into his car and took off, FOX 5 of Atlanta reported.

"You don’t immediately think, ‘Oh, these kids are going to steal my car,’" Brown said, according to the Atlanta Journal-Constitution.

Brown said the thieves jumped in his vehicle Wednesday after he got out to speak with community leader Ben Norman. He noted his white Mercedes-Benz coupe has keyless push-to-start ignition and he failed to realize it had been started, reports said.

The councilman described the kids as being between ages 6 and 12, FOX 5 reported.

What did Councilman Brown do?

He called the police.

In the end he got his Mercedes back. However, he is not planning to press charges.

Brown doesn't plan on filing charges against the kids, who he says acted out of desperation, Atlanta's WSB-TV reported.

"This is a generational poverty issue. These kids, it’s 12:30 in the afternoon. Why aren’t they in school? Why aren’t we enforcing systems to ensure that if they are not in school, they’re in recreational centers?" he said.

Indeed, why aren't they in school? Who is responsible for that?

Desperation? Perhaps you could make that case with a basic necessity. However, how does that compute with 6-12 year old kids stealing a luxury Mercedes-Benz coupe at 1230pm on a school day?

This story says so much about things that are so wrong right now.

The State of Education

From the beginning of the Covid pandemic and school closures I have expressed my concern as to what this was going to do to those children who were already behind in educational skills.

These children were already seriously behind before we stopped them from attending in-person classes.

Did these children even have a laptop and internet connection to attend school?

Did they have any type of parental support at home to supervise and support their online learning?

This tweet from Black education activist Denisha Merriweather puts the issue in perspective as she cites assessment results for Black students before the pandemic.

The NAEP stands for the National Assessment for Educational Progress. 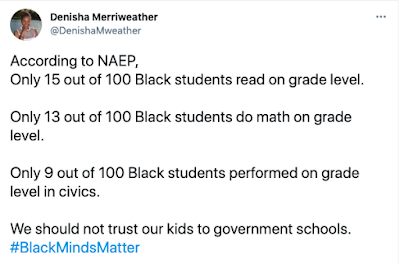 Here is some additional data I found from the National School Boards Association on the percentage of students in the 8th grade who are considered to be proficient in various academic subjects.

These were the numbers when these kids were in school.

What do you think the educational assessment scores look like for 2020-2021?

Is anyone even talking about the most important factor underlying all of this?

Instead of calling for defunding the police who is speaking out about the fact that 70% of black children are born to unwed mothers and we need more children living in two-parent households?