What If The Majority Is Wrong?

The Founding Fathers of the United States of America had a deep distrust of the use of power when they established the nation.

They were concerned about too much concentration of power in the hands of a few. They had just separated themselves from what they thought was a tyrannical monarchy. They did not want to return to anything like that.

They were also concerned about too much power being wielded by the majority. They distrusted a pure democracy for that reason. The majority could end up suppressing and marginalizing the minority. That could be true even with a slim majority of one vote.

That is a reason was have a representative republican form of government rather than a democracy. It is also the reason we have a Bill of Rights. Freedom of speech, religion and the other rights enumerated in those first ten amendments primarily exist to protect the rights of those who might be in the minority.

Of course, the major reason to be concerned about pure majority rule is the fact that the majority view may be wrong.

We have seen this time over time in history.

For a good portion of history it was almost universally the opinion of medical doctors and scientists that bloodletting was the best method to treat any type of disease. We recognize that as totally insane today but it was what almost every doctor believed to be right.

For centuries most doctors prescribed using mercury to treat a variety of ailments. Never mind that we now know that mercury is one of the most toxic substances on earth.

You may recall that a strong majority of NASA scientists argued that it was safe to launch the Challenger space shuttle in 1986 despite concerns expressed by some involving the launch decision that conditions were too cold to trust the integrity of the "O" rings in the booster rocket that might fail in those conditions. We know how they ended.

The same was true with the analysis of whether Iraq possessed weapons of mass destruction. The vast majority of intelligence analysts (in the United States and other countries) argued that Saddam Hussein had those weapons and was an imminent threat to world peace. That assessment led to the decision to invade Iraq in 2002.

What if the majority is wrong?

That question is not asked enough.

As I wrote in my last blog post, a big reason for this is that there is such a strong urge in most human beings to conform.

It is also true that not many want to rock the boat and challenge majority opinion. In fact, 95% of most any crowd is made up of followers.

This was demonstrated a few years ago in a research study at the University of Leeds conducted by Professor Jens Krause.

The study showed that it takes a minority of just five percent to influence a crowd's direction - and that the other 95 percent follow without even realizing what is going on.Professor Krause, with PhD student John Dyer, conducted a series of experiments in which groups of volunteers walked randomly around a large hall. Within the group, a few received instructions regarding where to walk. Participants were not allowed to communicate with one or intentionally influence anyone.

The findings in all cases revealed that the informed individuals were followed by the others in the crowd, forming a self-organizing, snake-like structure (or flock of sheep, take your pick).

"We've all been in situations where we got swept along by a crowd," said Professor Krause. "But what's interesting about this research is that our participants ended up making a consensus decision despite the fact that they weren't allowed to talk or gesture to one another. In most cases the participants didn't realize they were being led by others at all."

Consider all of this as we look at what we are experiencing in the United States right now.

There seems to be no room left for divergent opinions or views.

People who don't toe the line are censored or silenced.

This has been especially true on anything that has not matched the popular narrative on Covid.

The lockdowns were absolutely necessary.

Schools had to be closed.

Masks are absolutely critical in preventing the transmission of Covid.

The use of hydroxychloroquine or ivermectin to treat Covid is irresponsible and dangerous.

It is preposterous to suggest that Covid may have been formulated and escaped from the Wuhan lab.

The vaccines are safe and effective for everyone (even children and those who were previously infected with Covid and have natural antibodies).

How many of these will it be shown that the majority was wrong when we are able to assess all of this in the fullness of time?

Why was it that other voices had to be censored or silenced?

For example, one of the more interesting pieces of information I have seen in the last week was the Senate testimony of Dr. Anthony Fauci, Dr. Stephen Marks of the FDA and Dr. Rochelle Walensky of the CDC on how many of their employees had been vaccinated.

Based on the majority narrative, you would think it has to be close to 100%. After all, these are medical professionals who fully understand the risks of Covid and the advantages of the vaccines. We are told over and over again they are safe and effective. Many want to mandate everyone has to be vaccinated to be able to do anything in society through a vaccine passport.

The surprising answer was around 60% at NIH and the FDA, Walensky dodged the question.

Those are majorities. However, there are substantial minorities of medical professionals at the NIH, FDA and CDC who have taken a different position. These are people who undoubtedly have had access to the vaccines for many months considering where they work. These are people who should also have the very best information on the benefits and risks of the vaccines. Do you ever hear about this minority view?

Are these views even allowed to be heard?

In looking at the last 15 months there have been two very visible instances where we saw some who refused to conform.

We can now look at the record and whether the dissent of the majority view was right or wrong.

The first was Sweden.

As almost every other country chose to lockdown, mask and close schools, Sweden did not conform. They opted to do as much as they could to protect the most vulnerable and let the rest of the country attempt to be as normal as they could.

Going their own way brought enormous criticism. Sweden was pilloried for being uncaring and cruel.

However, let's look at the data 15 months into the pandemic.

Sweden suffered excess mortality like almost all countries early, but looking at the last 15 months in its entirety, the nation with the "minority" view has generally had lower excess mortality than countries that embraced lockdowns, school closure and mandated masks.

How is that possible if lockdowns, school closures and masks were the ONLY answer as we were told by the majority narrative. 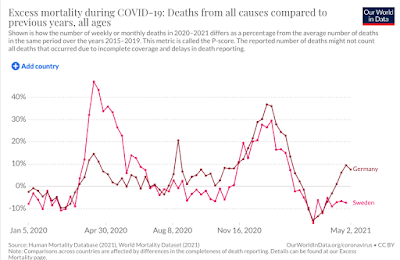 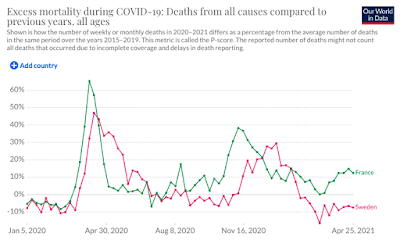 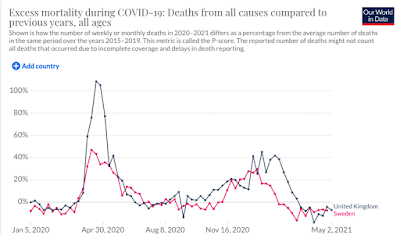 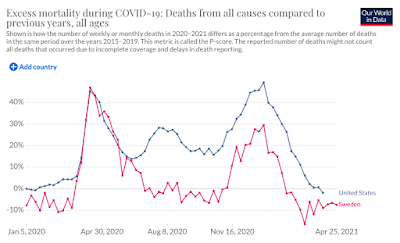 The other example of courage in standing against conformity that I found significant was one you might find surprising. Some might even consider it trivial in the scheme of things.

I found it anything but considering the circumstances.

I am referring to the decision of the SEC, ACC and Big 12 to proceed with their fall football seasons when all the other major college football conferences were announcing cancellation of their games for the year.

Of the Division 1 FBS conferences, the MAC cancelled their season first and was quickly followed by the Mountain West, the PAC 12 and Big Ten. It looked like conformity contagion would take hold and the entire college football season would be cancelled (or postponed until the Spring).

The majority narrative that was being used that it was much too dangerous for these college athletes to play and to be exposed to Covid. Doctors for some of the schools stated that a number of athletes could end up with serious heart conditions from Covid that could be as high as 15-20%.

However, unlike what occurred with college closures in the Spring, the SEC, ACC and Big 12 did not conform.

They decided to move forward on their own with a conference only slate of games beginning in late September.

In the end, the other major conferences blinked and were forced to conform. All later played abbreviated schedules. However, the SEC, which was criticized for moving forward with its schedule, ultimately played all of its games save for one.

As for the heart issue, a study of 3,000 athletes found less than 1% developed any type of heart issue from the virus.

This is from an ESPN story on the retrospective study that studied the heart issues.

A study released Saturday examining more than 3,000 college athletes who had COVID-19 found so few instances of heart-related issues that future cardiac testing might be used only for athletes with certain symptoms.

In the study, published in the American Heart Association's journal, Circulation, researchers found signs of possible, probable or definite myocarditis, or heart inflammation, in 21 of 3,018 athletes (0.7%) who had tested positive for COVID-19. It also showed that athletes with heart issues were more likely to have had moderate COVID-19 and/or cardiopulmonary symptoms.

What if the majority is wrong?

More people ought to ask the question.

More people should also respect those that offer a different opinion.

More people should also consider that someone else might be more knowledgeable or have a better perspective about an issue than they do.

At one time I thought I didn't even need to say this.

This is clearly not that time.