We have had many experts tell us what we should and should not do regarding Covid-19.

Many have made predictions and prescribed what we were supposed to do to stay safe.

You would think that almost a year and a half into all of this there would be more that they really knew.

You would also think there would not be many things that would still make you go hmmmmm.

You would also think that this far into all of this that more of these experts might be a little more contrite and not act as if they know it all.

Let's take a look at a few items that make me go hmmmm right now.

As I have stated before, I am not a doctor, epidemiologist or public health expert. I merely look at facts and data.

Most of the time it doesn't give me definitive answers. However, it does give me a pretty good ability to ask questions about whether what we are told matches what the data says.

Let's take a look at a few things that make me go hmmmmm right now.

Dr. Michael Osterholm is one of the Biden administration's top advisors on Covid.

On January 31 on Meet The Press Osterholm told us that in the next 6-14 weeks we were going to see a surge in Covid cases driven by the UK variant.

It is exactly 14 weeks after Osterholm gave us this gloomy prediction. 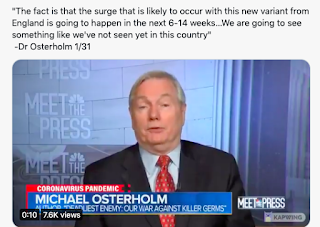 On March 28, CDC Director Dr. Rochelle Wallensky warned of "impending doom" stating the United States was about to see an increasing number of Covid cases due to states like Florida, Texas and others that were relaxing masking mandates and lockdown orders.

CDC director Dr. Rochelle Walensky became emotional at a White House coronavirus press briefing on Monday — her voice breaking as she warned that the US is facing “impending doom” as COVID-19 cases rise again.

“I’m gonna lose the script and I’m going to reflect on the recurring feeling I have of impending doom,” Walensky told reporters at the briefing.

Were the predictions of these "experts" anywhere close to what has happened? 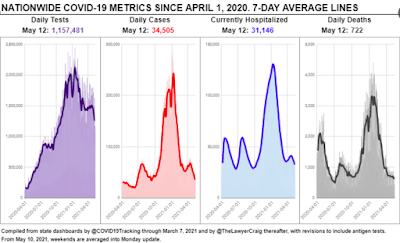 The 7-day rolling average of daily cases are -86% since the peak in mid-January.

The positivity rate on tests is -79%.

It makes me go Hmmmmmm.

It also makes me wonder if these experts can be this far off on this how much can I trust anything they say?

Even the New York Times this week called out the misleading guidance that Walensky and the CDC has been providing the public on the risks of outside transmission of Covid.

The CDC has been telling the public that 10% of all cases of Covid have occurred outdoors.

The New York Times says that it is more like 0.1%. 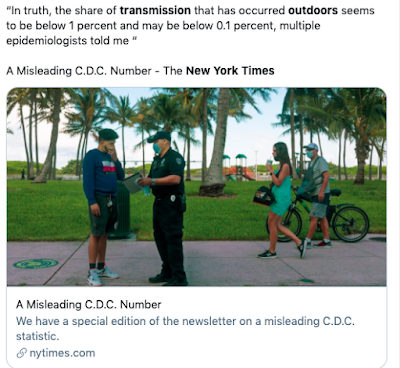 The New York Times is now doubting "the science" as well?

Is there a hint of change in the air?

It also brings to mind this quote from Thomas Sowell that a friend sent me today.

It is easy to look at the data above and suggest that the vaccines are the reason for the drop in cases, hospitalizations and deaths.

I hope that is the case.

However, we also saw that cases exploded in the United States in the first several weeks after the vaccines were first introduced.

We saw similar results in Israel and the UK after the introduction of the vaccines in those countries.

This effect has been particularly noticeable in island states such as Gibraltar and the Seychelles which went from almost no Covid cases and deaths to a massive spike right after the introduction of the vaccines.

This same effect has been seen in India which has recently been battling an enormous spike in Covid cases and deaths. Is it a coincidence that the increase began right about the time that vaccinations started taking place in that nation?

This graph shows the number of new cases in India since the beginning of the pandemic.

India started administering the vaccines in the last half of January. At that time there were very few cases. On February 1,  India reported 8,500 cases. India was reporting more than 400,000 new cases per day the first week of May.

Many argue that this is due to people letting their guard down after being vaccinated with the first dose. Or there are just not enough people vaccinated yet in India to see any effect from the vaccines.

However, the fact is that in four of the most five most vaccinated countries in the world cases have surged despite the high levels of vaccinated individuals. 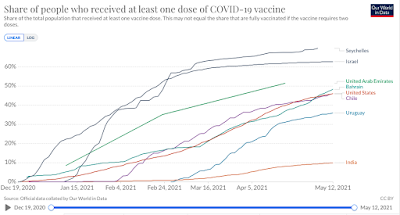 Look at the surge in cases in Seychelles, UAE, Bahrain and Uruguay. All began after vaccinations started and all are among the countries with the highest percent of the population vaccinated. 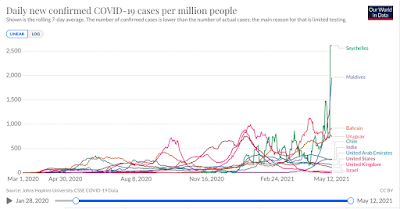 Israel had a surge in cases beginning in mid-December (vaccines were deployed beginning December 19) but has dropped sharply since mid-March.

Israel relied solely on the Pfizer vaccine. The other countries generally have used the Chinese vaccine or Astra Zeneca. Is that the reason? Are the U.S vaccines that much better?

One of the more interesting theories I have seen advanced is that the Covid virus may be harmlessly present in the small intestine of many people and is kept at bay by the person's natural immune system. This may particularly be the case in third world countries like India where people are bombarded by a number of germs, microbes and pathogens on a daily basis. Their natural immune systems are better developed to fight off health threats.

Why did India go through a year with almost no cases in one of the most densely populated countries in the world only to see cases explode recently?

The scientist who posits this theory states, for example, that the herpes virus is typically found to be present in 90% of adults but it flares up actively only in a small percentage.

Is there something about the vaccine that interferes with the normal immune system and activates the dormant virus?

Does the experience in India suggest that there is something to the argument that those who are vaccinated may later face greater risk with Antibody Dependent Enhancement if they are challenged with a later version of the wild virus? Most experts say this is not a concern but is there a good explanation for what is occurring in India and some of these other countries?

It has been great to see the significant drop in cases in the United States and Israel after the initial surge. It does appear that the vaccines are contributing to the decrease.

However, compare the experience of United States and Israel to Mexico and South Africa, two countries that have vaccinated very little of the population.

South Africa's cases are down -90% since the peak in January with less than 1% vaccinated.

Mexico cases are down -88% since it peak with only 11% vaccinated with one dose.

Is it the vaccine or are other forces (seasonality, Ivermectin, virus burning out) at work?

I don't know the answers to any of the questions above but the data and facts certainly make you go Hmmmm.

There is a lot of interesting data out there but almost nothing tops the recent surveys I have come across on public attitudes regarding Covid.

For example, look at this Morning Consult survey that compares the attitudes of those have been vaccinated versus those which have not on their comfort level in engaging in different activities. 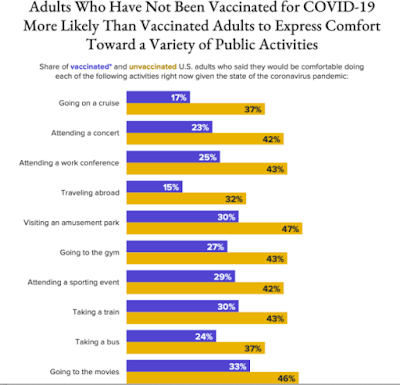 What is the reason to get vaccinated?

It seems to show the total failure of public health messaging over the last year.

If you doubt that consider the messages of Osterholm and Walensky who were prophets of doom at the same time that the vaccines were being rolled out.

What confidence did they have in the vaccines when they were talking about impending doom?

Similarly, look at this Economist/YouGov poll that asked 1500 U.S. adults when they thought it would be safe to go out in public without a mask.

Bear in mind that everyone 18 years and older has been able to get the vaccines for several weeks.

What I found most interesting is the responses by age.

Despite having almost no serious risk of severe illness or death from Covid, 23% in the ages 18-29 demographic said that it would be 2022 or later before they felt comfortable going maskless. Only 16% felt is was safe right now. Similar responses were found for those between ages 30-44 that also have low risk.
On the other hand, 41% of those age 65+ thought it was safe right now to go without a mask. This might be due to higher level of vaccination in this group but the disconnect in perceptions is still remarkable considering the risk profiles of the two groups.
It certainly is enough to make me go Hmmmmm.
It also might say something about how thoroughly our young people have been brainwashed by our public health authorities and social media.
How many of them do any research on their own?
Have we raised a generation of sheep?
Hmmmmmm.
Posted by BeeLine at 10:37 PM