A Million A Minute

The federal government is projected to collect $3.3 trillion in tax and other receipts this year.

Of course, that is not enough to balance the budget.

Spending is projected to be $3.9 trillion. That leaves a deficit of around $600 billion.

We are often told that we simply are not taxing people enough (especially "the rich").

However, federal tax receipts in 2015 are over 40% higher than they were 10 years ago in constant dollars (adjusted for inflation).  In other words, taxes have kept up with inflation and risen by another 40% on top of that since 2005.

We were adding  $1 million of additional debt per minute in 2005.

We have added almost $11 trillion in federal debt in 10 years! 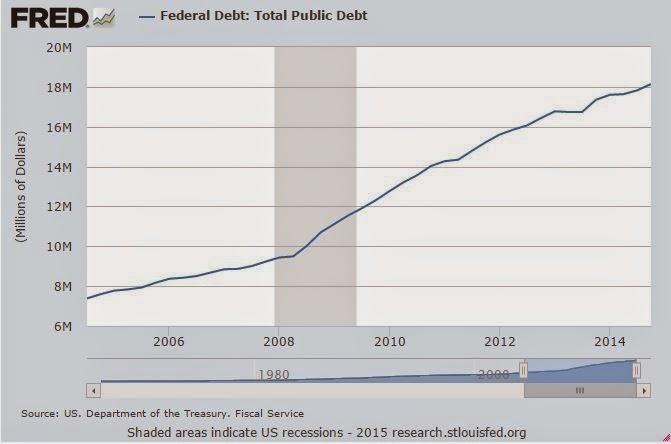 Gross interest on Treasury debt securities on that debt will total an estimated $455 billion for the year.

That's right, 10 years ago we were accruing $1 million of additional debt per minute.

Today we are accruing $1 million of additional interest expense per minute.

What is most troubling is that we have reached that level of interest costs despite the fact that the federal government is paying an average interest rate on its borrowings that is currently below 2.4%.

It has never been lower in the history of the republic.

What happens if interest rates rise to a range of 4%-5%, which would still be low based on historical averages?

Interest costs would double and gross interest costs on the debt would begin to approach $1 trillion per year.

What if interest rates on public debt increased to something closer to the long-term average of 6.8%?

That would add $800 billion of annual interest costs to the federal budget and require $1.25 trillion in federal receipts to just pay the interest expense on the debt.

Let's put that it in context.

Total projected individual income tax receipts for 2014 were $1.4 trillion. That means that individual income taxes would have to be increased by over 50% to just pay for interest on the federal debt. Of course, taxpayers would receive absolutely nothing in return. The interest would merely be paying for past spending with no current benefits.

If you don't like the idea of raising taxes to cover the added interest cost, how about cutting something in the budget to pay for it?

The Defense budget this year is $631 billion. You could cut the entire amount and still not have enough to pay the increased interest bill.

You don't want to do that?  How about Medicare? $532 billion. Still not enough by itself.

The fact is that you could cut out the largest single item in the federal budget (Social Security Old-Age and Survivor Benefits) at $748 billion and still not be able to cover this increase in interest costs.

A million a minute in interest costs?

This is a chart prepared by Daniel Amerman where he modeled US debt outstanding if the annual deficit stays flat at $342 billion per year and compares the effect of different interest rates--the current average rate of 2.4% compared to the 7.4% average rates that we had from the mid-1970's to 1999.


Compound interest pounds you if you are on the wrong side of the interest curve.

I hope we can all take a punch.

Note: All the data above (except for average interest rates on U.S. Treasury Debt is from Fiscal 2015 Historical Tables of the Budget of the U.S. Government published by the Office of Management and Budget.
Posted by BeeLine at 8:43 PM